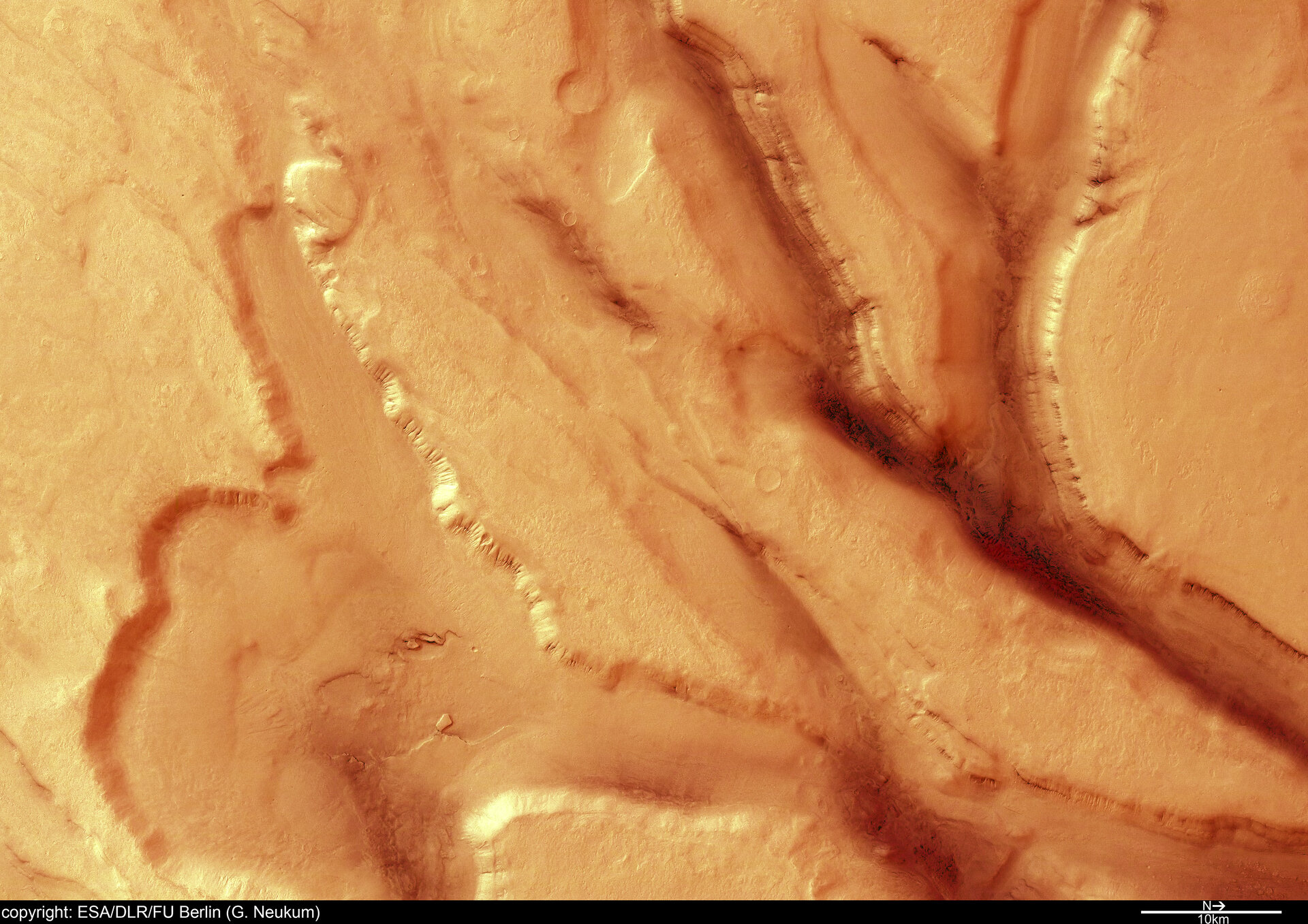 These images, taken by the High Resolution Stereo Camera (HRSC) on board ESA's Mars Express spacecraft, show the tectonic 'grabens' in Tempe Terra, a geologically complex region that is part of the old Martian highlands.

The HRSC obtained these images during orbit 1180 on 19 December 2004 with a ground resolution of approximately 16.5 metres per pixel. The data were acquired in the region of Northern Olympus Mons, at approximately 48.5° North and 288.4° East.

The Tempe Terra region of Mars displays a complex geologic history; the images were taken just west of the Barabashov crater and cover the transition zone between the old Martian highlands to the south and the geologically younger northern lowlands.

The context map is centred on the region of Mareotis Fossae showing numerous parallel grabens, or depressed blocks of land bordered by parallel faults, running in a Northeast-Southwest orientation. These appear in more detail in the south (left) of the camera images.

Tectonic processes (extensional stresses, in this case) have led to the development of these grabens. After the tectonic activity, other processes reshaped the landscape. In the scene, the results of weathering and mass transport can be seen. Due to erosion, the surface has been smoothed, giving formerly sharp edges a rounded appearance. Such terrain is called "fretted terrain" and is characteristic for the transition of highland to lowland.

The valleys and grabens are 5 to 10 kilometres wide and up to 1500 metres deep. Along the graben flanks, the layering of the bedrock is exposed. The lineations on the valley floors are attributed to a slow viscous movement of material, presumably in connection with ice. These lineations and indications of possible ice underneath the surface lead scientists to assume that the structures are rock glaciers or similar phenomena known from alpine regions on Earth.

The stereo and colour capabilities, and the high-resolution coverage of extended areas, provided by the HRSC camera allow for improved study of the complex geologic evolution of the Red Planet. The Mars Express HRSC camera gives scientists the opportunity to better understand the tectonics of Mars, including processes active in the more recent geologic history.