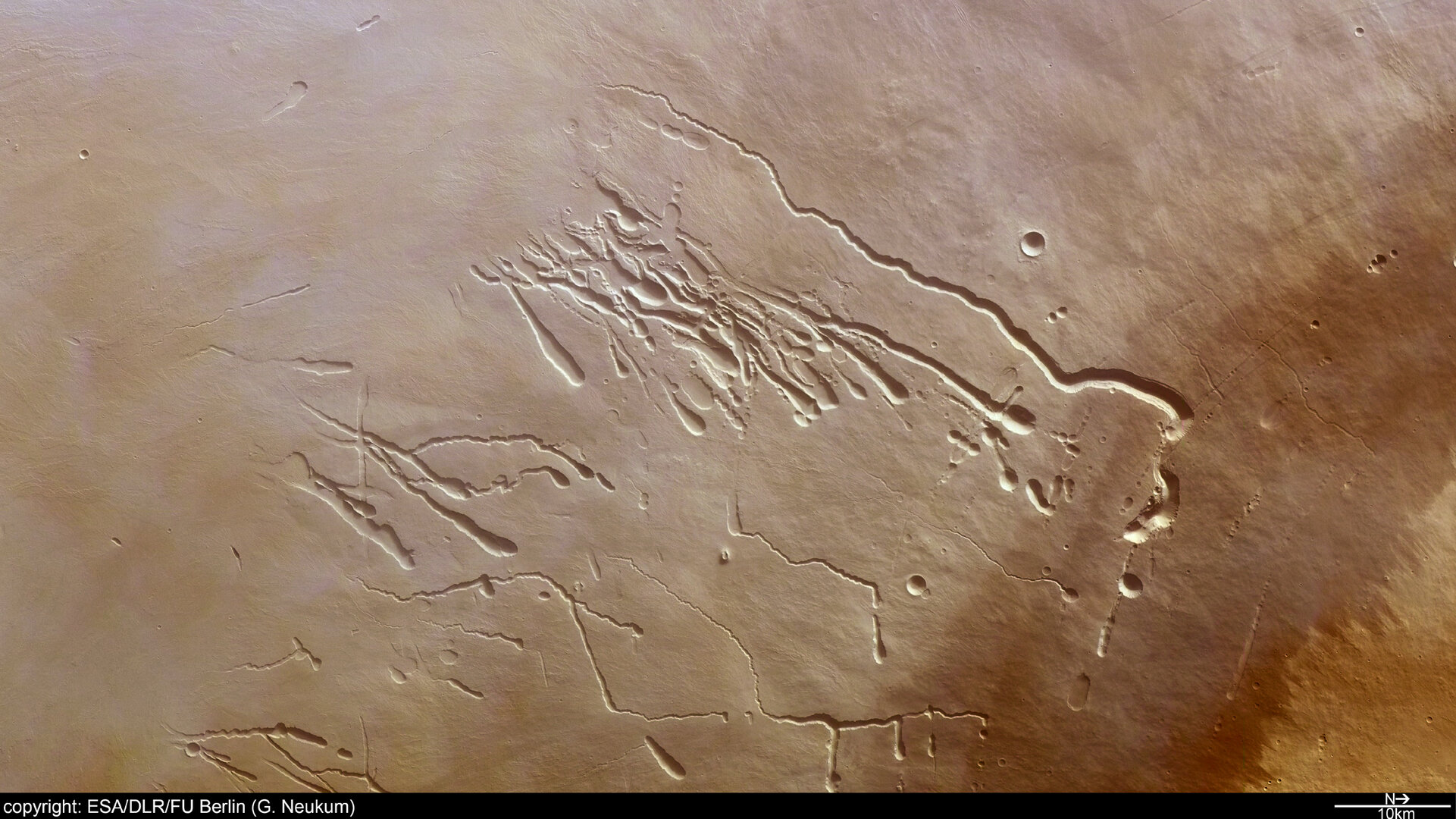 These images, taken by the High Resolution Stereo Camera (HRSC) on board ESA's Mars Express, show Pavonis Mons, the central volcano of the three 'shield' volcanoes that comprise Tharsis Montes.

ESA's Mars Express spacecraft obtained these images using the HRSC during orbit 902 with a ground resolution of approximately 14.3 metres per pixel. The images were acquired in the region of Pavonis Mons, at approximately 0.6° South and 246.4° East.

The context map is centred on Pavonis Mons, one of the three volcanoes called Tharsis Montes (the others being Arsia and Ascreus Montes, aligned with Pavonis in a line nearly 1500 km long).

Pavonis Mons, rising roughly 12 km above the surrounding plains, is the central volcano of the three 'shield' volcanoes that comprise Tharsis Montes. Gently sloping shield volcanoes are shaped like a flattened dome and are built almost exclusively of lava flows.

The dramatic features visible in the colour image are located on the south-west flank of Pavonis Mons. Researchers believe these are lava tubes, channels originally formed by hot, flowing lava that forms a crust as the surface cools. Lava continues to flow beneath this hardened surface, but when the lava production ends and the tunnels empty, the surface collapses, forming elongated depressions. Similar tubes are well known on Earth and the Moon.

The long, continuous lava tube in the northwest of the colour image extends over 59 km and ranges from approximately 1.9 km to less than 280 m wide.

Pit chains, strings of circular depressions thought to form as the result of collapse of the surface, are also visible within the colour image. In the northeast, there is a clear distinction between the brighter terrain at higher elevations and darker material located down slope. In the southwest, the lava tubes appear to be covered by subsequent lava flows.

By studying Martian volcanoes, scientists can obtain information regarding this intriguing planet. For example, the gradual flank slopes and the flattened, dome-like appearance of Pavonis Mons suggest that low-viscosity lava formed this volcano.