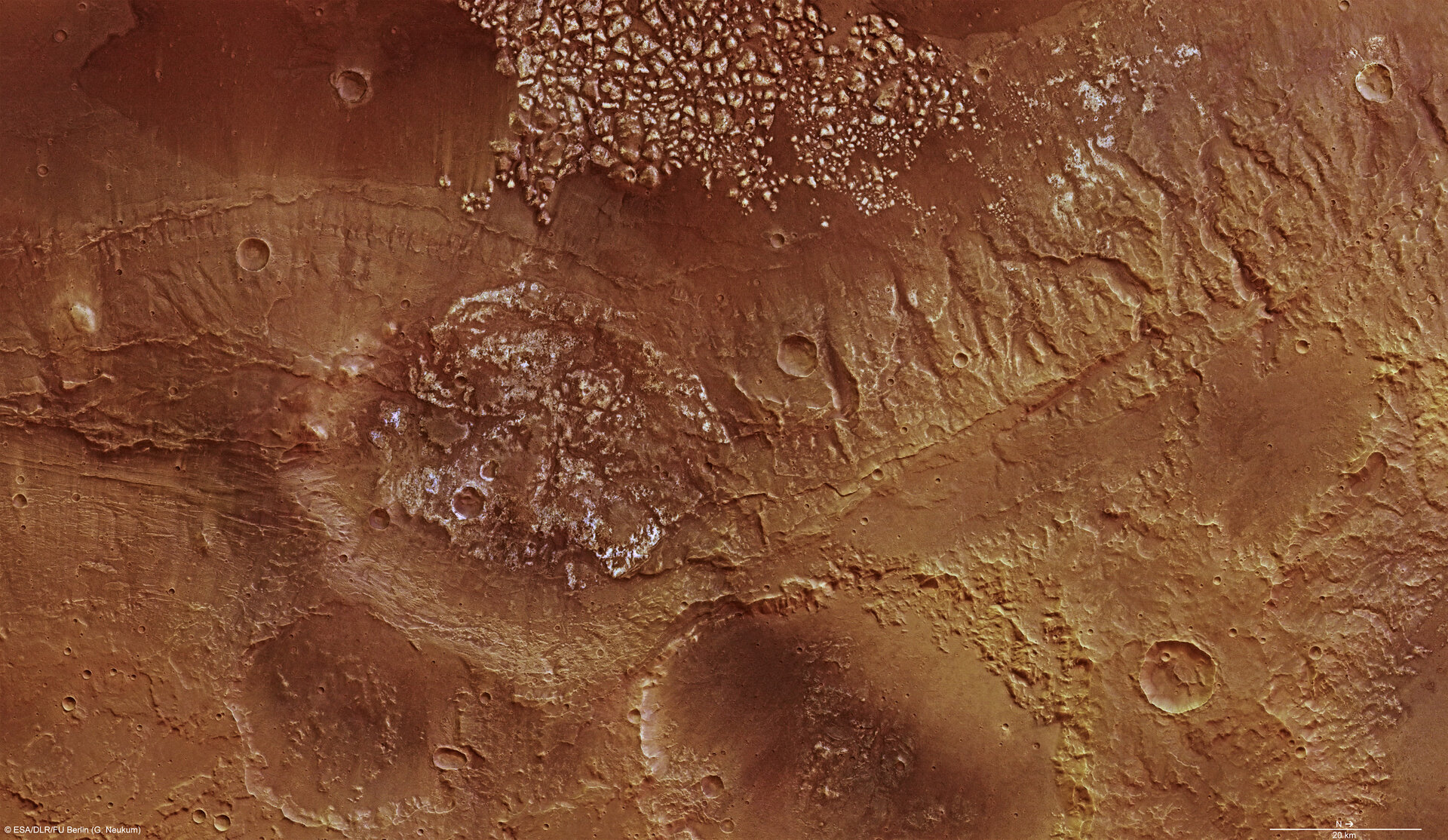 When Mars Express set sail for the crater named after Portuguese navigator Ferdinand Magellan, it found a windblown plateau and mysterious rocky mounds nearby.

Stretching across 190 x 112 km, this region of Mars covers an area of about 21 280 sq km, which is roughly the size of Slovenia. It is located to the southwest of the volcanic region Tharsis on the southern highlands of Mars, near the crater Magellan.

Named after the famous Portuguese navigator and explorer Ferdinand Magellan, the impact crater is about 100 km across. Only a small portion of the crater rim is visible in this image, sitting at the lower right, because the Mars Express High-Resolution Stereo Camera (HRSC) has zeroed in on some intriguing features nearby.

In the west of this region (at the upper edge of the main image) there are light-coloured, irregular protrusions. These features are up to 2 km tall and are probably large rock fragments or mounds of rock. However, their formation is still debated.

One possibility is that the top layer of rock was shattered by the shockwaves from an impact. Another possible explanation would be from a process called subrosion. On Mars, subrosion is widely observed when rising magma heats frozen ground water, which melts and removes subsurface material as it flows away. This leads to a honeycomb of cavities that eventually collapse due to the weight of the overlying rock layers, leaving the irregular mounds standing.

The northern part of the region (to the right of the main image) displays linear features with a preferential northwest–southeast orientation. These eventually lead to deep, well-defined valleys and are likely to be faults, formed during either an impact event or the upsurge of the Tharsis region that created enormous stresses in the planet’s crust. Examining the geometry of fault zones offers clues to the level and the direction of the stress exerted on the rock.

A rather smooth, barely fractured plateau is located almost in the centre of the main image. It is possible the plateau is made up of the same material as the highly fractured mounds in the west. Fine trails run from southwest to northeast across here. These could be an indication of erosion by fine dust particles carried on the wind, sandblasting the plateau smooth.

With a ground resolution of about 25 m per pixel, the data were acquired for the region of Magellan Crater at about 34°S/185°E, during Mars Express’s orbit 6547 on 6 February 2009.