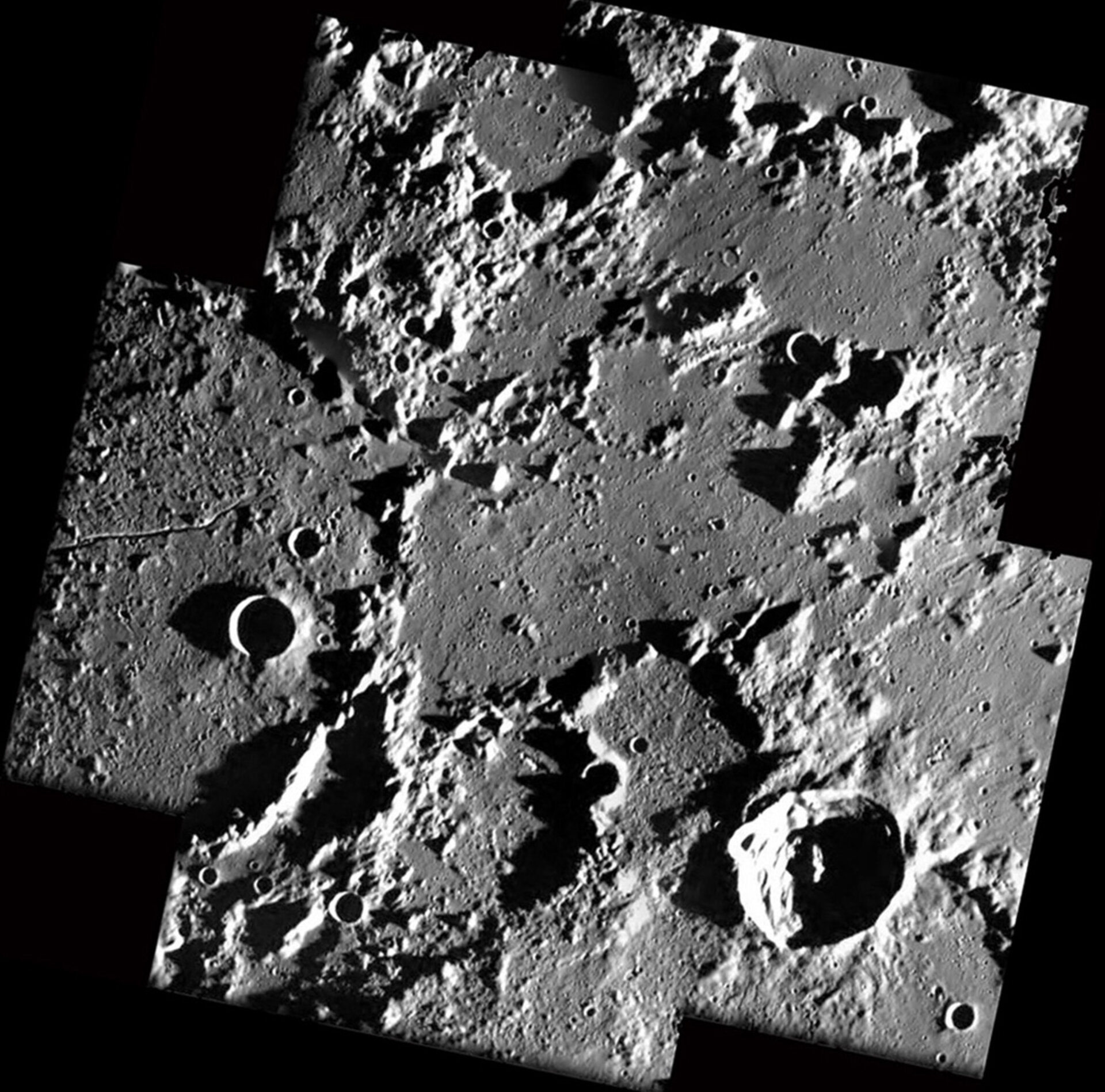 This composite image, obtained by the Advanced Moon Imaging Experiment (AMIE) on board ESA's SMART-1 spacecraft, shows craters reshaped by lava and debris.

In this scene near the Moon's terminator (the line separating lunar day and night), the low solar elevation on the landscape produces long shadows of several craters reshaped by lava, debris and erosion, and other geological features.

The AMIE camera obtained the snapshot images on 5 and 6 February 2006, from altitudes ranging between 2685 km (bottom of the composite) and 2709 km (top).

Each individual snapshot, taken with the AMIE clear filter, is a square of about 135 kilometres per side. The whole composite covers approximately 270 square kilometres.

On the lower right it is possible to see Crater Mayer, a complex impact crater 38 kilometres in diameter, located close to the northern edge of the Mare Frigoris (63.2° N, 17.3° E).

This crater was formed in relatively recent times. Ejected material is visible around the crater as a smooth hilly area. Terraces formed during the crater collapse can be seen in the inner walls of its sharp-edged rim - an almost polygon-shaped feature - and the crater’s interior is rough and irregular.

The illuminated central peak appears very clearly. The lava formation attached to the south-eastern rim of the crater is of particular interest.

On the left of the image is Crater Bond, today an irregular walled plain of about 156 kilometres in diameter (5.3° N, 4.5° E). The outer rim of the original Bond crater has been eroded and reshaped, and now it basically consists of an outline of hills and mounts.

The interior floor is relatively flat in comparison with the rim region, although there are sections of rough terrain near the northern rim.

In the centre of the walled plain is a narrow ditch that runs toward east. To the south-east of this formation is 'Bond B', a circular, simple bowl-shaped crater. It is interesting to see the contrast between the rough texture of Bond (left of the image) and the smooth surface of the plains at the centre of the image.

The floor of the large Crater Bond is littered with scattered blocks, likely originating from ejecta from the impact that created the Imbrium basin.

The original Bond crater must have been filled to a depth of about 2 km, and then cut by the ditch. This provides a rare example of a linear ditch that cuts the ejecta generated by an impact basin.