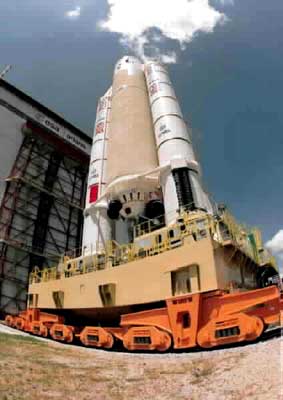 Europe's Spaceport near Kourou in French Guiana is one of the world’s most modern and efficient launch sites. Over the past 35 years, three launch pads and many other buildings have been built to support the European launch industry.

All of Europe’s Ariane rockets have been launched from French Guiana. The ELA-3 launch complex at the spaceport was built specially to serve the new Ariane-5 heavy-lift vehicle. It is designed to handle a launch rate of up to 10 Ariane-5 missions per year.

ELA-3 covers an area of 3 x 5 km – equal to more than 1500 football pitches. Apart from the launch pad, it includes buildings where rockets and satellites are prepared and a plant that makes fuel for the Ariane-5 solid rocket boosters.

Satellites stored in containers arrive by plane at Rochambeau Airport in Cayenne. Large rocket stages are brought from Europe in one of the special transport ships and unloaded at the Pariacabo dock. The satellites and rocket stages are taken by road to the nearby spaceport.

Ariane-5 assembly starts in the 58-metre-tall Launcher Integration Building. After 13-days, the rocket is rolled out on its mobile launch table and slowly moved along a railway track to the 90-metre-tall Final Assembly Building.