Rockets in war and peace 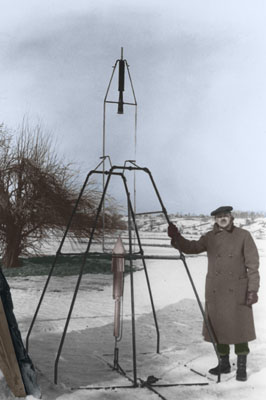 The first person to design a rocket that used liquid fuels instead of gunpowder was a Russian schoolteacher named Konstantin Tsiolkovsky. More than 20 years passed before the first flight of a liquid-fuelled rocket took place. On 16 March 1926, a small rocket built by American Robert Goddard rose to a height of 12.4 metres in a flight that lasted 2.5 seconds.

In the years that followed, Germany took the lead in rocket development. The result was the V-2, a missile that was used to attack cities such as London towards the end of the Second World War.

In 1945, many German rocket scientists went to work in America or the Soviet Union. They helped to build bigger and more powerful missiles that could also be used for space exploration.

Sputnik 1, the world’s first satellite, was launched by a Soviet rocket on 4 October 1957. Within 10 years, the United States, under the leadership of German scientist Wernher von Braun, had built the Saturn 5, which could carry three men to the Moon.

Since 1979, Europe has developed a series of Ariane launchers that are among the most powerful and reliable in the world.