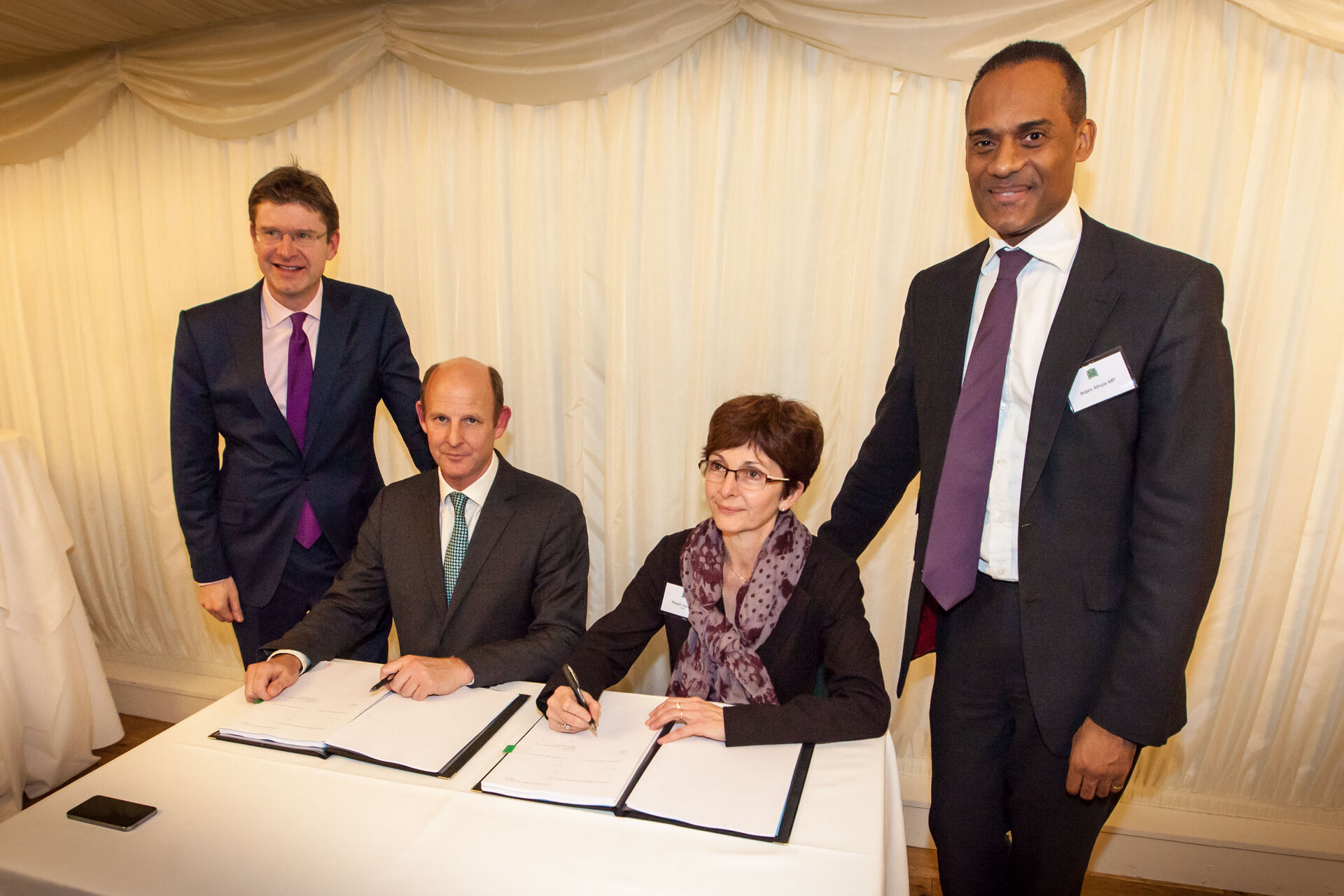 A partnership worth €15 million between ESA and UK satellite operator Inmarsat will ensure safer air traffic over Europe by 2018.

A contract was signed today in London in the presence of Rt Hon Greg Clark, UK Minister for Universities and Science.

ESA’s Iris is looking to satellites to make aviation safer through modern communications. Worldwide digital data links via satellite, offering much higher capacity, will become the norm for cockpit crews, with voice communication used only for specific operations.

Iris is part of a much broader push driven by the European Commission to modernise air traffic management in support of the Single European Sky.

Iris Precursor is a milestone in this direction, modernising air traffic management and ultimately making data links the primary means of communication, eventually replacing voice reports from pilots. This signature is a first step in a partnership that will provide long-term approaches to air traffic management.

It is based on SwiftBroadband Safety, a service currently offered by Inmarsat that provides aircraft with an ‘always-on’ data connection and is an extension of the company’s 20 years of experience as the leading provider of safety communications to 98% of airlines. Hawaiian Airlines recently began flight trials of SwiftBroadband Safety as part of achieving approvals for oceanic operations.

Thanks to the Iris Precursor upgrade, the service will reach the required level of safety for use in safety-critical applications over continental airspace and provide a satellite overlay to terrestrial networks.

While the initial focus will be on Europe, the capabilities developed will open opportunities for deployment in North America, Asia Pacific and other regions, where the growth of air traffic is placing a strain on ground-based networks.

Iris Precursor will provide the technologies that will be used for air–ground communications for initial ‘4D’ flight path control, pinpointing an aircraft in four dimensions: latitude, longitude, altitude and time.

This precise tracking of flights along their route and more efficient management of air traffic means that flight plans can be continually updated to maintain an optimal trajectory to destination.

The European Commission has set the following long-term goals:  a three-fold increase in capacity, which will also reduce delays on the ground and in the air; safety improvement by a factor of 10; a 10% reduction in the effects flights have on the environment; and the provision of air traffic management services to airspace users at a cost of at least 50% less.

Rupert Pearce, CEO of Inmarsat, said: “Today’s announcement cements our role in providing aviation safety services. We have been committed since the launch of Future Air Navigation Systems in the 1990s to support safety communications for the world’s airlines.

“Our aim, and the purpose of this partnership, is to continue to provide airlines across the globe with improved safety services, aircraft routing and environmental and cost efficiency benefits.”

The contract is the result of a major funding commitment approved at ESA’s 2012 Ministerial Council, with the UK as the main contributor followed by Denmark, Norway, the Netherlands, Ireland and Portugal.

The overall project will cost €15 million, with the UK contributing €7.4 million, and industry €4 million. Inmarsat has formed an Industrial team with 16 companies from eight ESA Member States.

“It is a first milestone in a fruitful collaboration for the long-term modernisation of air traffic management.”

“One in five telecommunication satellites are built in the UK and today’s €15 million contract between ESA and UK satellite operator Inmarsat is further proof that the UK is a global leader in the telecommunications field.  From mapping West Africa to combat Ebola to landing a satellite on a comet, British engineers are pushing through scientific boundaries on a daily basis.