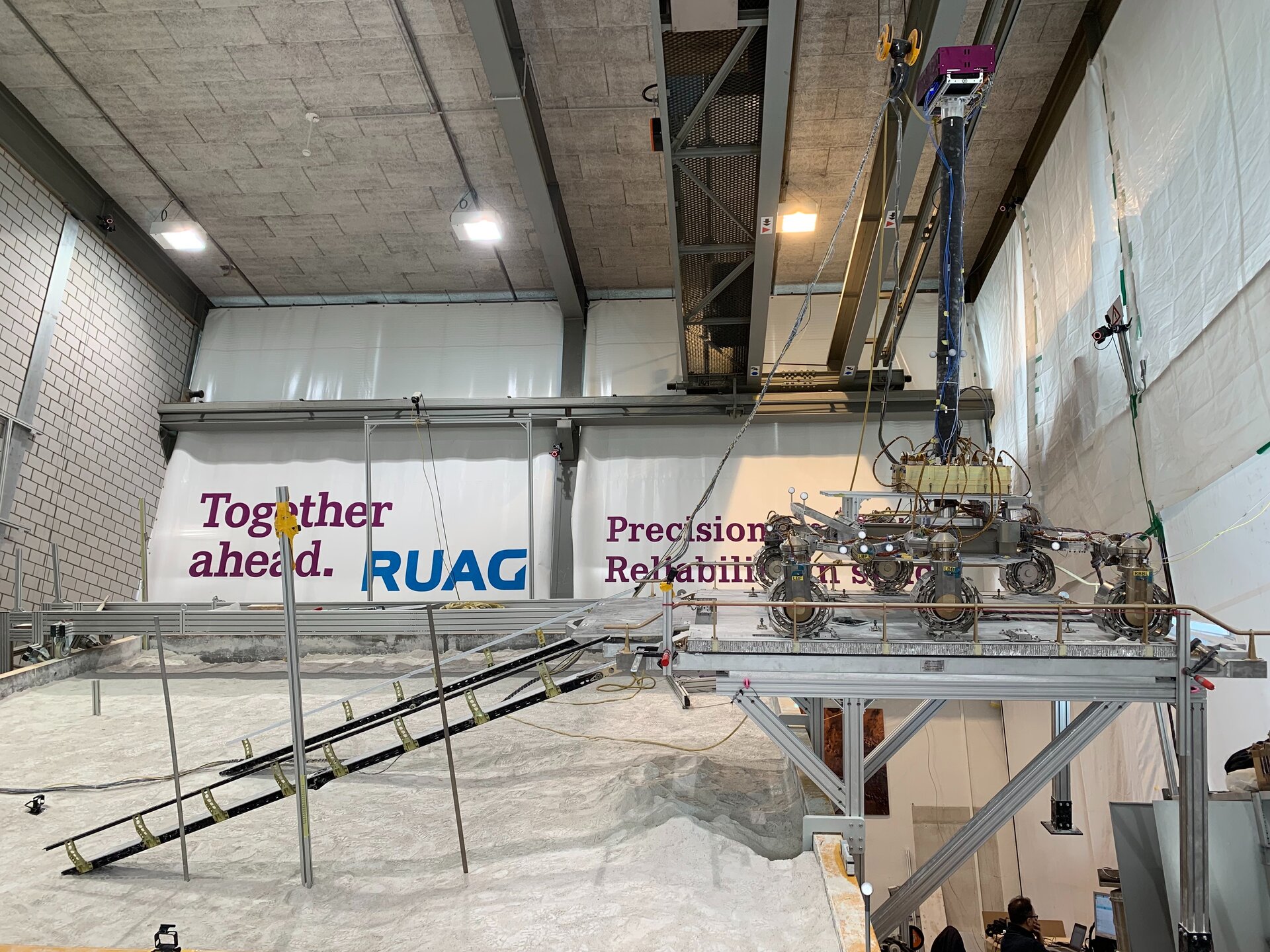 Before Rosalind Franklin the ExoMars rover can search for signs of life on Mars, it must learn how to manoeuvre the landscape. Scientists and engineers are putting the rover through a series of locomotion tests to fine tune how it will respond to a challenging martian terrain.

The ExoMars mission will see Rosalind the rover and its surface platform land on Mars in 2021. There, the rover will move across many types of terrain, from fine-grained soil to large boulders and slopes to collect samples with a 2-m-long drill, and analyse them with instruments in its onboard laboratory. Engineers must ensure Rosalind does not get stuck in sand or topple over and that it is able to climb steep slopes and overcome rocks.

The ExoMars teams are using a dedicated rover to run locomotion tests. In this image, the full-sized locomotion model is about to move from the surface platform. This rover has been designed to behave exactly like Rosalind would do under martian gravity – that is about a third of gravity found on Earth. For that purpose, the model has a different weight distribution and features a boom mounted on top to achieve the exact location of the centre of gravity of the rover.

A special facility at RUAG Space in Zurich, Switzerland, emulates all the terrain conditions that Rosalind the rover is expected to encounter on Mars: different types of soil, various obstacle shapes and sizes and all kind of terrain slopes. A large hydraulic platform filled with 20 tonnes of soil was put in place for the tests.

Over the past few weeks, ESA, Roscosmos, Thales, Airbus and RUAG engineers have been testing the capability of the rover to egress from its landing platform onto the martian soil. Should the platform and rover find themselves on a slope upon landing, as simulated in the image, Rosalind the rover must be able to negotiate steep inclinations to descend from the platform. The team looked closely at the performance of the rover over the ramps at different inclination angles, from 5 up to 35 degrees.

The steep slope was a challenge for the rover. The wheels found it difficult at times to gain traction, a valuable lesson of what can be expected on Mars.

The rover has six wheels. Each wheel pair is suspended on a pivoted bogie so each wheel can be steered and driven independently. Its flexible metallic wheels, equipped with springs, offer great traction capability, allowing the rover to achieve better grip during obstacle climbing and achieve smoother locomotion.

Thanks to a triple-bogie locomotion system, the rover is able to overcome obstacles as big as its wheels. The rover uses inclinometers and gyroscopes to enhance its motion control.

Two cameras at the top of the rover’s mast allow Rosalind Franklin to see in 3D, like humans do, and identify rocks and slopes in front of it. This also allows the navigation system to take account of, and correct for, any wheel slippage. Rovers on Mars have previously been caught in sand, and continued wheel turning might actually dig them deeper – just like a car stuck in mud or snow.

These tests took place at the same time as the ExoFit field tests. In the most recent campaign, the rover drove from its landing platform and targeted sites of interest to sample rocks in the Mars-like landscapes of the Chilean desert.