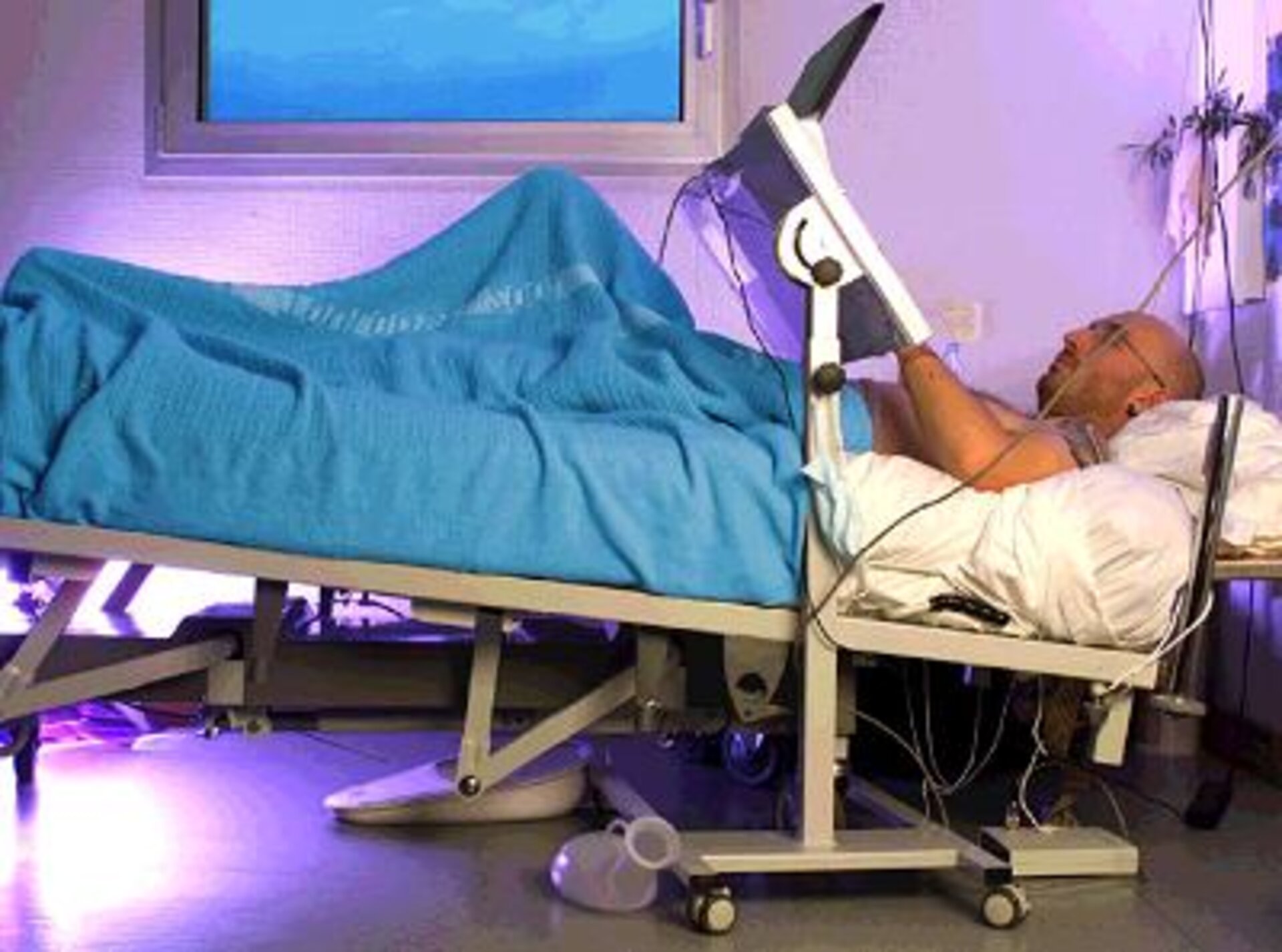 Now over the half-way mark on their long mission, the explorers are relaxed, confident of success and fully adjusted to their new environment. They are supplying 'mission control' with a steady stream of valuable data and all systems are nominal.

There's just one thing. These space explorers are not in space. They're in bed. Their spacecraft is the Clinique Spatiale at the French Space Agency's MEDES centre, located at Rangueil just outside Toulouse. The mission they are engaged upon is designed to investigate the changes that take place in human muscle and bone during long-duration spaceflight, as well as other physiological and psychological adapatations.

To spend three months lying in bed is a lot tougher than it sounds. For a start, the volunteers lie on a slope, with their heads angled downward at 6 degrees: it is the best way to simulate some of the effects of weightlessness here on the surface of the Earth. And 'lying in bed' means exactly that. The 14 volunteers eat their meals, visit the toilet, take showers and undergo countless medical tests without even sitting up - far less standing on their feet.

Even so, when CNES advertised for volunteers last year, thousands applied. Many, of course, were wildly unsuitable; but after the initial winnowing process, MEDES was still left with 600 serious candidates for the 14 places on the 'mission'.

Dr Jacques Bernard, one of the 10 European scientists involved in this study, explained.

"The final selection was made first on grounds of health risk: we didn't want anyone who was likely to have a coronary, for example. And of course we were looking for psychological stability.

"We are using men only in this experimental campaign for reasons of scientific consistency. But women have taken part in bedrest experiments in the past, and will be again."

So what motivates the 14 men who went through the selection process?

"Well, the money comes into it just a bit. More important though, the experience represents a break in their lives. Some of them are fed up with their careers. This gives them a change without losing their job: from their employers' point of view, the experiment counts as being 'on leave'. Some of the volunteers have a real interest in medical research; for others, it's space science. And of course, for everyone the whole thing is seen as a challenge."

The volunteers spend their three months two to a room, but they are not isolated from each other: there is much moving around the centre - and a good deal of banter - as people go for medical tests and although they are physically distanced from the outside world each is equipped with a mobile phone and an internet-linked computer. Unobtrusively, video cameras (operating by infrared at night) and movement detection radar confirm that the volunteers stick to their discipline, but right from the beginning they have been as determined as anyone to make the experiment a success.

Says Dr Barnard: "They are a group, now; it's a complex chemistry but they are a real group, with leaders and no one excluded. They phone each other all the time.

"The three sub-groups - exercise, medications and the control - had to be selected at random. The choice of roommates was made by a team of psychologists. Not so much to find pairs who were compatible as to avoid pairs that were incompatible."

What does the research team hope to gain from the campaign?

"We are learning more about muscle and bone adaptation to a new kind of life in space. It's not a deterioration: it's an adaptation, an important distinction. Of course, it's a 'disadaptation' for life back on the ground. So we are examining the process of adapation in a group of healthy men. As I said, we have divided them in three groups: one will receive certain medication for the stabilisation of the bone tissue, the second special exercise routines and a third control group only basic care. At the end of the campaign, we'll compare the results. And follow-up tests over the next two years will teach us much about the re-adaptation process, too.

"We have been asking the same questions for 20 years: there have been many bedrest experiments around the world. But we have never really demonstrated for certain that there actually is bone loss. We've always been sure that it occured, but we have never really proved it. Now, though, we have much more powerful tools available for analysis. Magnetic Resonance Imaging (MRI) for instance, and more accurate ways to measure bone density. Throughout the campaign, we have been making regular muscle biopsies and with today's equipment we can learn much more from biochemical analysis of the samples.

Certainly, the volunteers seem to be thriving. And as the experimental campaign moves into its second half, the atmosphere behind the doors of the MEDES centre is relaxed. It's a curious place: on the surface, it is very hospital-like, with white-coated specialists and support staff moving around with purposeful efficiency, discussing professional business or simply chatting amicably. In their beds, the 'patients' occupy a different world, with a different timescale and a different sense of duration.

But there the resemblance ends. There is a good deal of laughter, a sense of a shared mission and a shared achievement. The volunteers are not patients: they are pioneers, and they know it.

Are there any complaints?

"Oh, they complain about this and that. And they like to make a fuss over their food. We take a great deal of care with the food: we have a dietician and a cook, and in the end we usually satisfy the volunteers. Still, every day there are long discussions." Dr Bernard waves towards a window that overlooks the city of Toulouse. "But out there it's exactly the same. After all, this is still France."