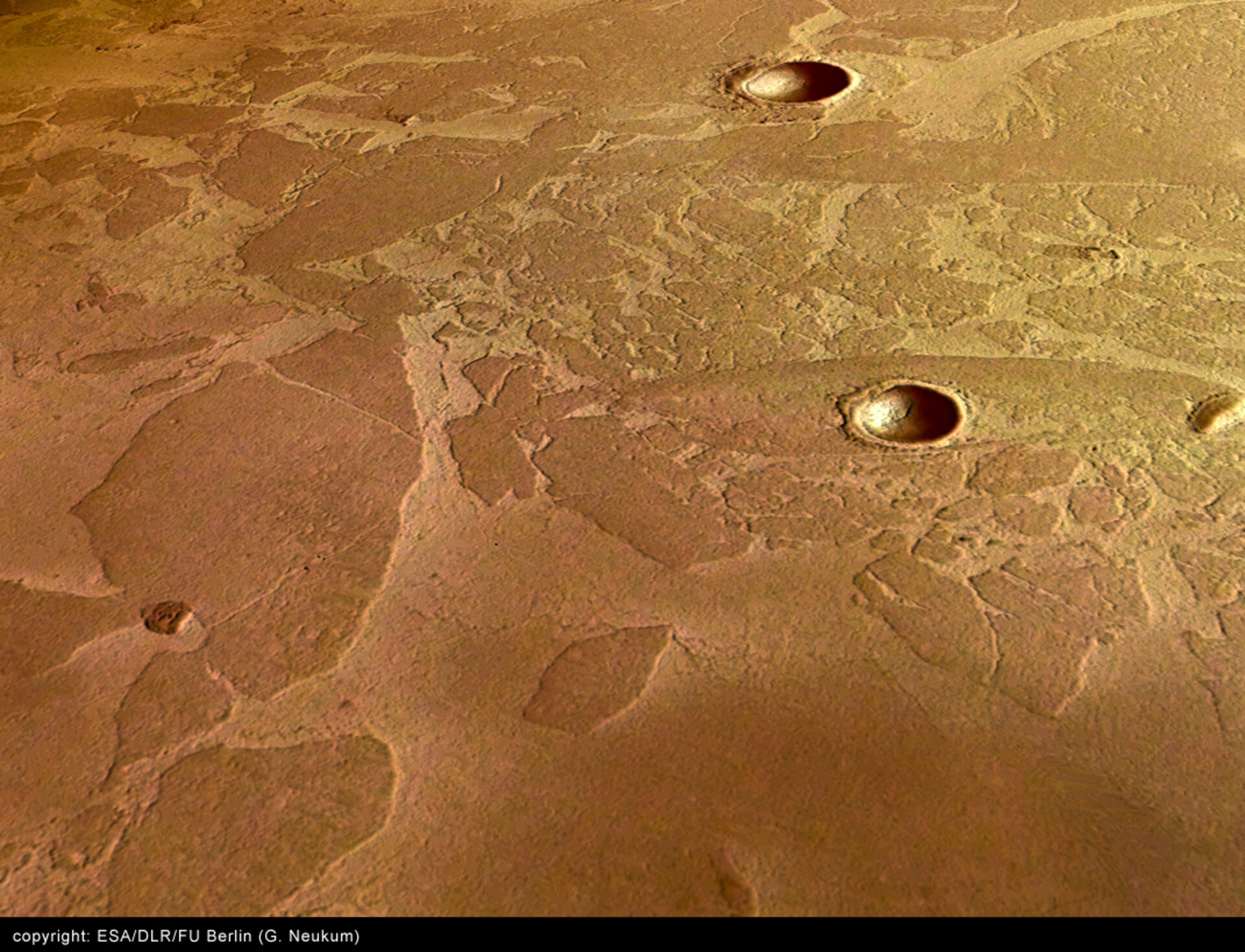 This image, taken by the High Resolution Stereo Camera (HRSC) on board ESA’s Mars Express spacecraft, shows what appears to be a dust-covered frozen sea near the Martian equator.

It shows a flat plain, part of the Elysium Planitia, that is covered with irregular blocky shapes. They look just like the rafts of fragmented sea ice that lie off the coast of Antarctica on Earth. This scene, taken during orbit 32, is a few tens of kilometres across, and is centred on latitude 5º North and longitude 150º East.

The water that formed the sea appears to have originated beneath the surface of Mars, and to have come out through a series of fractures known as the Cerberus Fossae, from where it flowed in a catastrophic flood.

It collected in a vast area about 800 kilometres long and 900 kilometres wide with a depth of about 45 metres. As the water started to freeze, floating pack ice broke up into rafts. These became later covered in ash and dust from volcanic eruptions in the region.

Ice is unstable at the surface of Mars because of the low atmospheric pressure, and sublimates away (changes straight from ice to vapour without passing through the liquid state) into the atmosphere, but some of the ice rafts appear to have been protected by layers of volcanic dust. While the entire sea froze solid, the unprotected ice between the rafts sublimated to leave 'ice plateaus' surrounded by bare rock.

The sparse cratering of this region shows that it cannot have formed more than about five million years ago, meaning this is a relatively young feature.

The question remains as to whether the frozen body of water is still there, or whether the visible floes are just the remains of the sublimation process. Two observations suggest that the ice is still there: first, the submerged craters are too shallow, indicating most of the ice is still in the craters; and second, the surface is too horizontal – if the ice had been lost, there would be a greater height variation.

These findings were presented on 21 February at ESA's Mars Express Science Conference at ESTEC in Noordwijk, the Netherlands, where about 250 scientists from all over the world are discussing the first year of scientific results from Mars Express. The complete scientific paper by Dr J. Murray et al. describing the frozen sea results will be published by the journal Nature in March 2005.