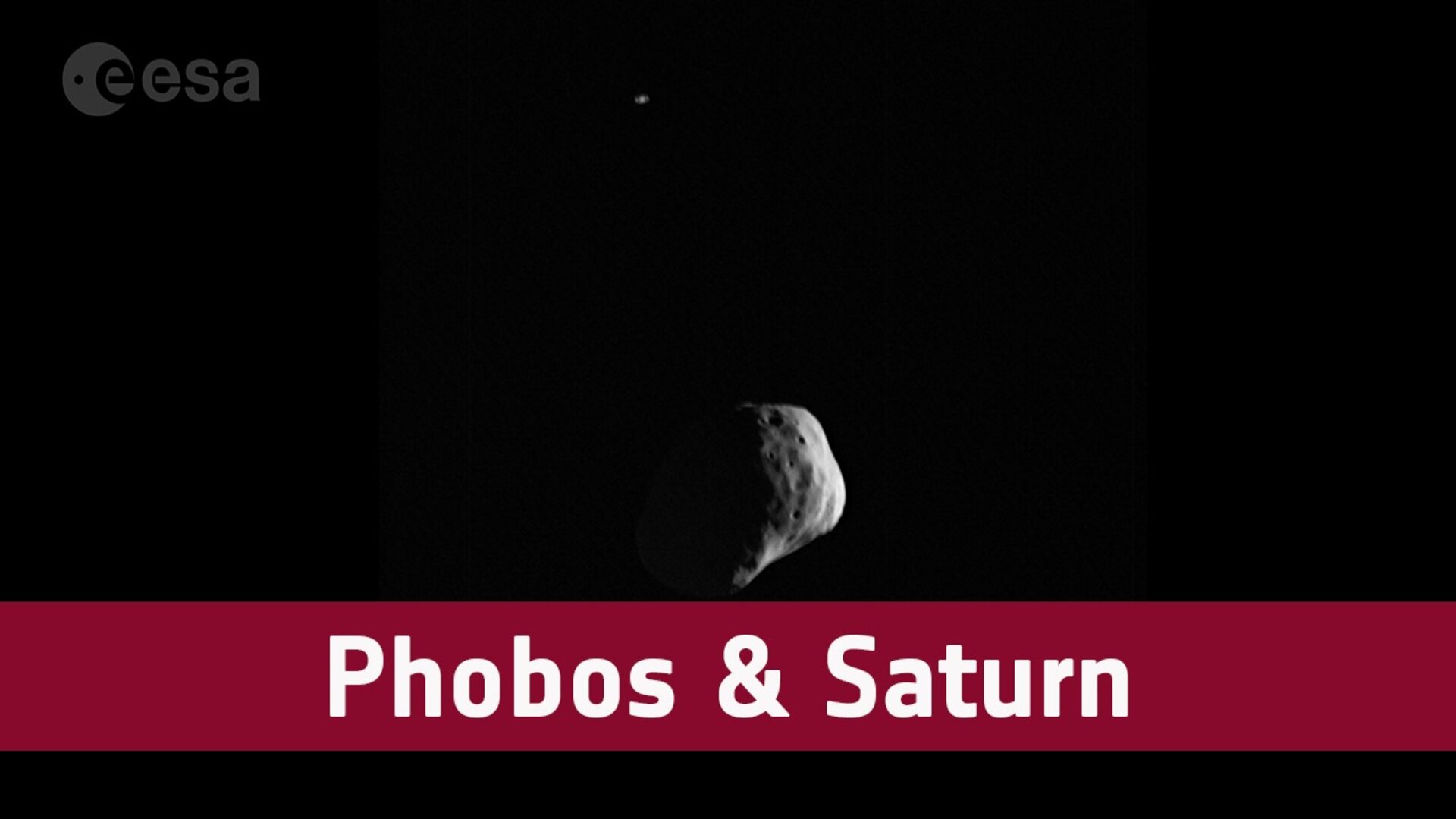 New images and video from ESA’s Mars Express show Phobos and Deimos drifting in front of Saturn and background stars, revealing more about the positioning and surfaces of the Red Planet’s mysterious moons.

Mars’ two small moons are intriguing objects. While we know something of their size, appearance and position thanks to spacecraft such as ESA’s Mars Express, much remains unknown. How and where did they form? What are they made of? What exactly is on their surfaces – and could we send a lander to find out?

Mars Express has been studying Mars and its moons for many years. The satellite recently observed both Phobos, Mars’ innermost and largest moon at up to 26 km in diameter, and Deimos, Phobos’ smaller sibling at 6.2 km in diameter, to produce this new video and series of images.

The video combines 30 images as individual frames and shows Phobos passing through the frame with the gas giant planet Saturn, which sits roughly a billion kilometres away, visible as a small ringed dot in the background.

Mars Express has been working for more than 14 years at the Red Planet. While several other spacecraft are currently at Mars, including ESA’s ExoMars Trace Gas Orbiter, Mars Express’ near-polar elliptical orbit gives it some advantages for certain observations.

In particular, its path takes it closer to Phobos than any other spacecraft, and allows it to periodically observe the moon close up from within 150 km – in the summer of 2017, it came as close as 115 km.

The images of Phobos and Saturn comprising the video were taken on 26 November 2016 by the High Resolution Stereo Camera. Mars Express was travelling at about 3 km/s when it obtained these views, highlighting the importance of knowing Phobos’ exact position: the spacecraft had just seconds to image the rocky body as it passed by.

Scientists repeatedly refine our knowledge of the moons’ positioning in the sky and ensure it is up-to-date by observing each moon against background reference stars and other Solar System bodies. These calculated positions are incredibly precise, and can be accurate to just a couple of kilometres.

These images are also key to understanding the surface and structure of the moons. Alongside the view of Phobos set against Saturn, Mars Express also obtained images of Phobos against a reference star on 8 January 2018 (star circled in red), close-up images of Phobos’ pockmarked surface on 12 September 2017, and images of Deimos with Saturn on 15 January 2018.

The frames of Phobos’ surface were taken during close flybys, and show the bumpy, irregular and dimpled surface in detail. Phobos has one of the largest impact craters relative to body size in the Solar System: Stickney crater’s 9 km diameter is around a third of the moon’s diameter. It is visible as the largest crater in these frames.

The same side of the moon always faces the planet, which means multiple flybys are needed to build up a full map of its surface.

Deimos is visible as an irregular and partially shadowed body in the foreground of one of the new Mars Express images, with the delicate rings of Saturn just about visible encircling the small dot in the background.

Deimos is significantly further away from Mars than its bigger sibling: while Phobos sits at just 6000 km from the surface, Deimos orbits at nearly 23 500 km. For comparison, our own satellite is around 16 times further from Earth than Deimos is from Mars.

There is much we still wish to know about the Mars system. The moons remain particularly mysterious, with open questions about their origins, formation and composition. As a result, combined with their proximity to the Red Planet, the little moons have generated a lot of interest as a target for future missions.

Phobos in particular has been considered for a possible landing and sample-return mission. Owing to its nearness to Mars and one side always facing its parent, the moon could also be a possible location for a more permanent observation post. This would enable long-term monitoring and study of the martian surface and atmosphere, and communications relay for other spacecraft.

Understanding more about the positioning, surface, composition and terrain of both Phobos and Deimos from Mars Express observations is important for preparing for future missions.