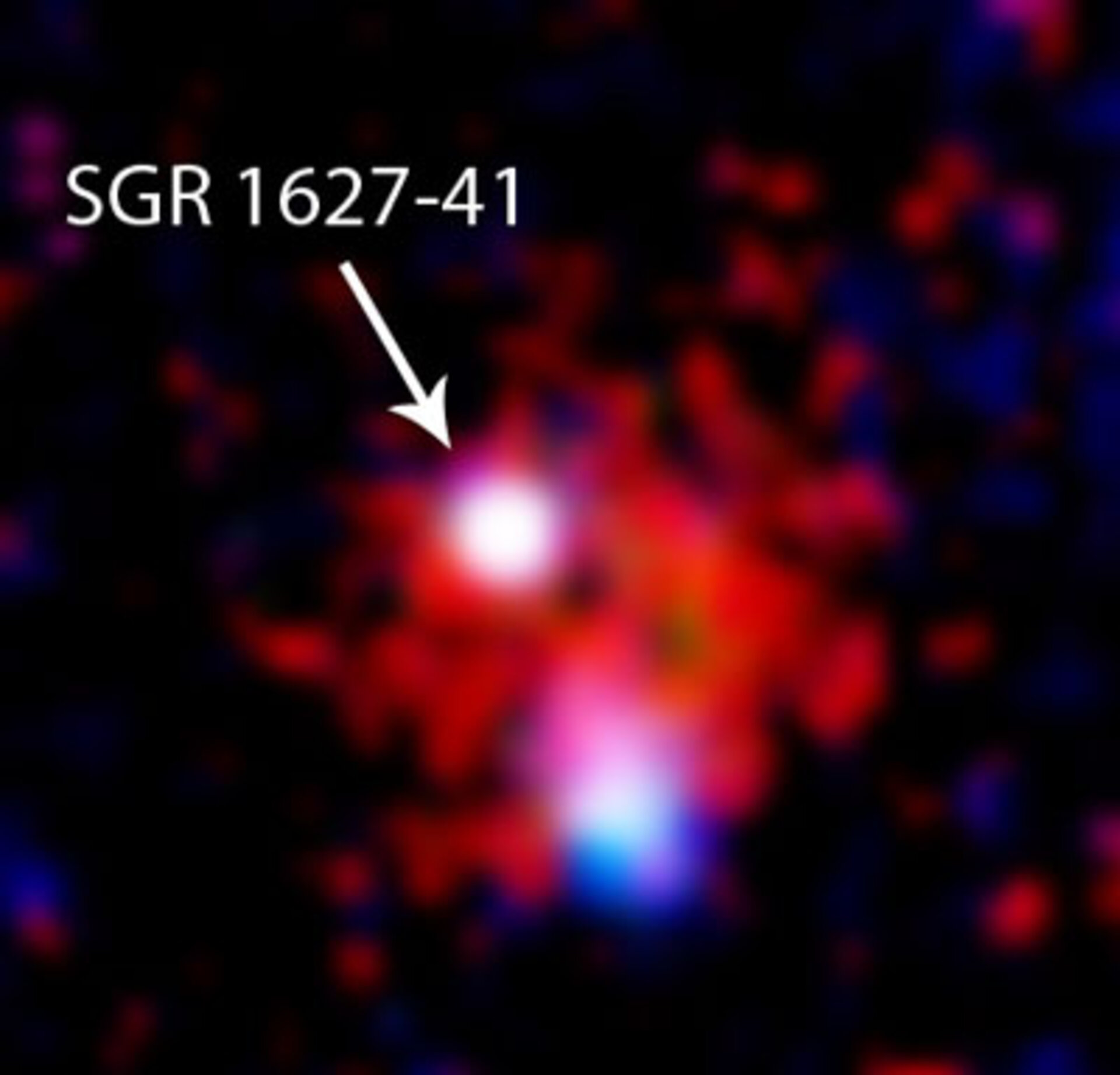 XMM-Newton has caught the fading glow of a tiny celestial object, revealing its rotation rate for the first time. The new information confirms this particular object as one of an extremely rare class of stellar zombie – each one the dead heart of a star that refuses to die.

There are just five so-called Soft Gamma-ray Repeaters (SGRs) known, four in the Milky Way and one in our satellite galaxy, the Large Magellanic Cloud. Each is between 10 and 30 km across, yet contains about twice the mass of the Sun. Each one is the collapsed core of a large star that has exploded, collectively called neutron stars.

What sets the Soft Gamma-ray Repeaters apart from other neutron stars is that they possess magnetic fields that are up to 1000 times stronger. This has led astronomers to call them magnetars.

SGR 1627-41 was discovered in 1998 by NASA’s Compton Gamma Ray Observatory when it burst into life emitting around a hundred short flares during a six-week period. It then faded before X-ray telescopes could measure its rotation rate. Thus, SGR 1627-41 was the only magnetar with an unknown period.

Last summer, SGR 1627-41 flared back into life. But it was located in a region of sky that ESA’s XMM-Newton was unable to point at for another four months. This was because XMM-Newton has to keep its solar panels turned towards the Sun for power. So astronomers waited until Earth moved along its orbit, carrying XMM-Newton with it and bringing the object into view. During that time, SGR 1627-41 began fading fast. When it came into view in September 2008, thanks to the superior sensitivity of the EPIC instrument on XMM-Newton, it was still detectable.

A team of astronomers took the necessary observations and revealed that it rotates once every 2.6 seconds. “This makes it the second fastest rotating magnetar known,” says Sandro Mereghetti, INAF/Istituto di Astrofisica Spaziale e Fisica Cosmica, Milan, one of the team.

Theorists are still puzzling over how these objects can have such strong magnetic fields. One idea is that they are born spinning very quickly, at 2-3 milliseconds. Ordinary neutron stars are born spinning at least ten times more slowly. The rapid rotation of a new-born magnetar, combined with convection patterns in its interior, gives it a highly efficient dynamo, which builds up such an enormous field.

With a rotation rate of 2.6 seconds, this magnetar must be old enough to have slowed down. Another clue to the magnetar’s age is that it is still surrounded by a supernova remnant. During the measurement of its rotation rate, XMM-Newton also detected X-rays coming from the debris of an exploded star, possibly the same one that created the magnetar. “These usually fade to invisibility after a few tens of thousand years. The fact that we still see this one means it is probably only a few thousand years old”, says Mereghetti.

If it flares again, the team plan to re-measure its rotation rate. Any difference will tell them how quickly the object is decelerating. There is also the chance that SGR 1627-41 will release a giant flare. Only three such events have been seen in the last 30 years, each from a different SGR, but not from SGR 1627-41.

These superflares can supply as much energy to Earth as solar flares, even though they are halfway across the Galaxy, whereas the Sun is at our celestial doorstep. “These are intriguing objects; we have much still to learn about them,” says Mereghetti.