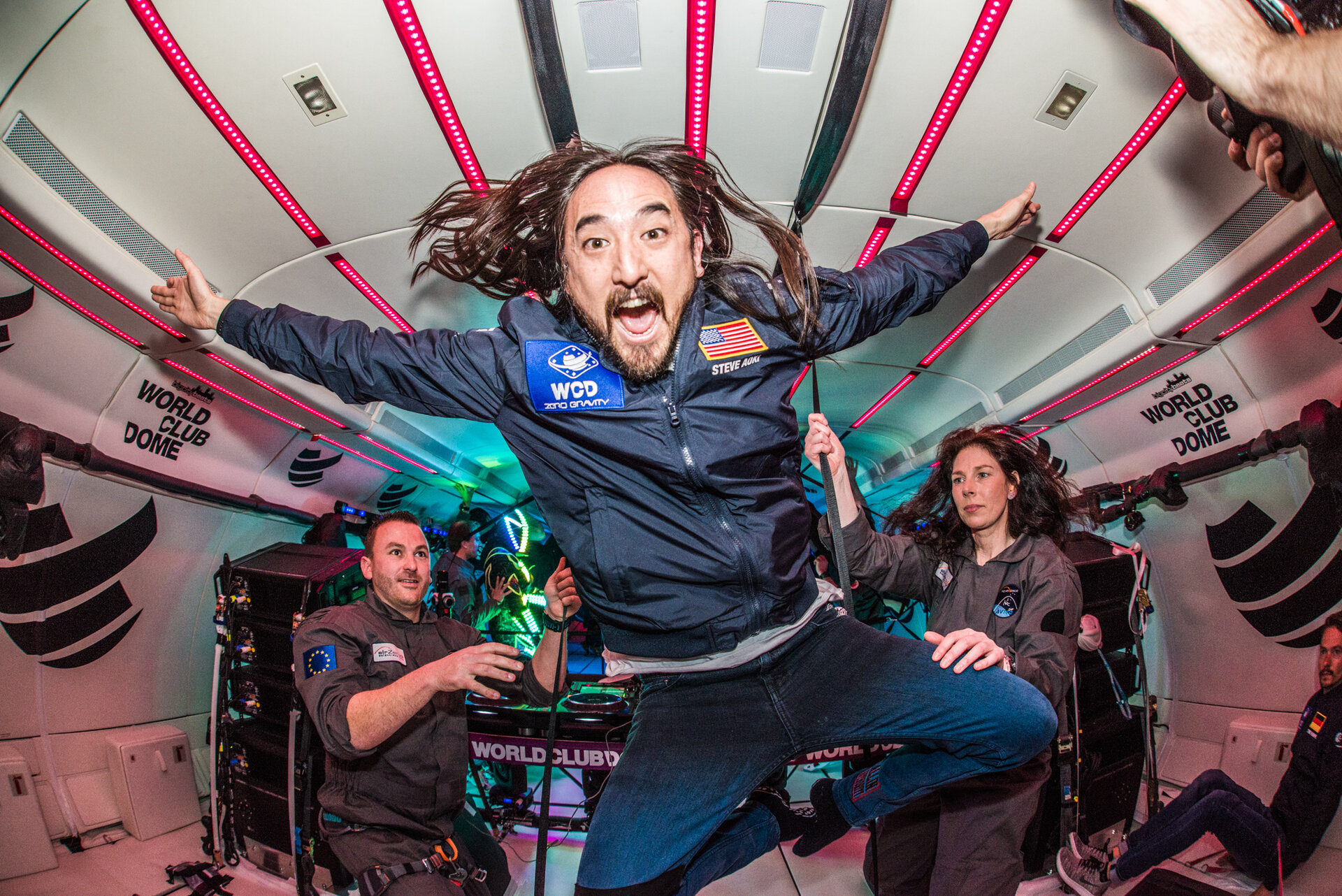 Last month, 10 years to the day that Europe’s Columbus space laboratory was launched to the International Space Station, 20 lucky clubbers got a taste of weightlessness – not to conduct gravity-free science but to party with superstar DJs Steve Aoki, W&W and Le Shuuk.

Organised by BigCityBeats, the World Club Dome’s project to hold a zero-G dance party took off on a specially modified aircraft from Frankfurt airport , to combine a fascination of science with the joy and fun of dance in this first-of-its-kind flight in Europe.

The aircraft flew in a series of ‘parabolic arcs’, meaning up and down several times angled at 45º so that, at the top of the curve, the passengers and experiments experienced around 20 seconds of microgravity. ESA astronauts Pedro Duque and Jean-Francois Clervoy joined the ‘weightless’ flight and provided background and safety tips to the DJs and party-goers.

On loan from its usual airport in Bordeaux, France, the aircraft is normally used for scientific research and testing equipment for spaceflight by French operator Novespace.

The idea for this flight came about when CEO Bernd Breiter was looking for ways create a teaser party for a bigger event on Earth in June. He’d seen a TV show about astronauts and, after daydreaming about putting on a dance party in space, thought of using a zero-gravity flight.

When BigCityBeats called Novespace, French astronaut Jean-Francois Clervoy said, “Our first reaction was, ‘What?’” Clervoy explained, “Then we realised it must be possible, as there are no rules of physics or civil aviation that say no, so we said let’s make it happen. This was a first for us, it was a big event.”

“In space we say we are exploring strange new worlds and boldly going where no man has gone before, and that’s what we did. I think the music was the perfect factor to unite people.”

More than 30 000 people entered a video competition to grab a place on the flight, with 14 winners from Australia, South Korea, United Kingdom and the United States eventually passing the stringent medical requirements for taking part.

While the zero-G dance party idea could be seen as frivolous, laid on by a promotion company to generate interest in its brand, Clervoy is quick to point out that there is a benefit to humankind. More than a third of Novespace's income from these commercially available flights goes towards funding new science flights, he says.