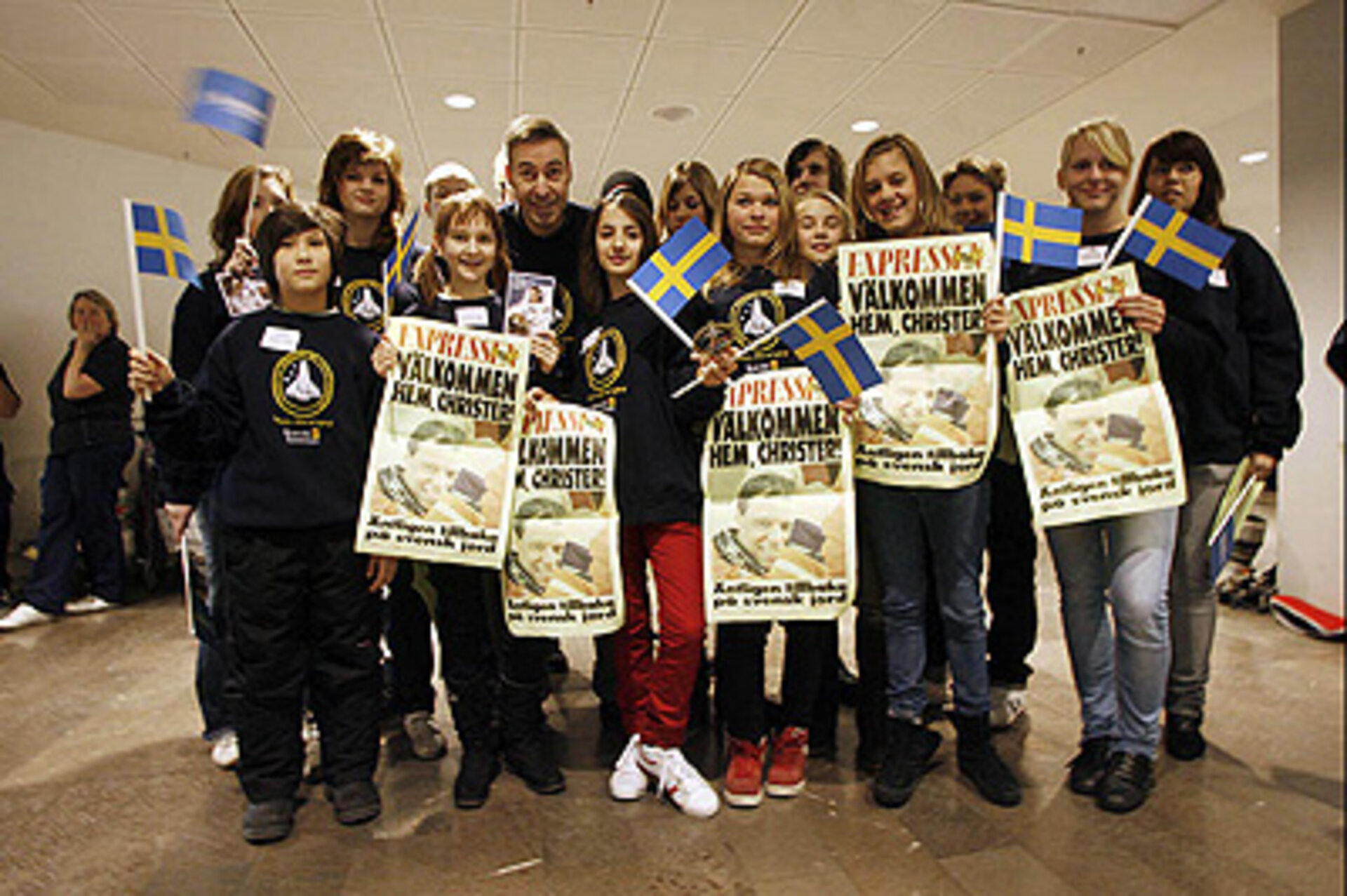 On January 25, Sweden's own space hero, Christer Fuglesang, returned to Sweden for his first visit after his successful mission to the International Space Station.

Christer Fuglesang arrived at Arlanda Airport at 07.30 and was welcomed by music from Arthur C. Clarke's and Stanley Kubrick's 2001 – A Space Odyssey, and Richard Strauss' Also Sprach Zarathustra. The press gathering that awaited him was immense.

In addition to a complete roll call of national media, several local media was present, as well as the Norwegian Aftenposten. Christer Fuglesang has ties to Norway, as his father was born there.

Not only was media present. There were also several representatives of Swedish space organisations who wanted to greet Christer, as well as a group of students from the Thunman school (Thunmansskolan) from the town of Knivsta. The school had the opportunity to talk to Christer via radio while he was onboard the ISS. This was an exclusive for the students of the Thunman school, due to an intrepid radio amateur and committed teachers.

In the arrival hall at Arlanda Airport, Christer was also greeted by a "Christer Fuglesang Fan Club" – all with "Space Shuttle Discovery" shirts with the STS-116 logo on them. The members of the club were retired civilian pilots, and they had also been in Florida to watch the launch. "We've waited three years for this now, so we wouldn't miss it for the world!"

Sweden's Space Minister, who is also Minister of Industry and deputy Prime minister, Maud Olofsson, was also present at the event.

Together with Christer Fuglesang, Maud Olofsson uncovered a portrait photograph of Christer that will be displayed in Arlanda's Hall of Fame.

"Here are a hundred famous Stockholmers, and now there is one more," said Maud Olofsson. "You have experienced amazing things, and I'm very jealous! I am also proud that you've made such good publicity for Sweden. You've also made us learn new words. I for one now know the meaning of a 'scrubbed launch'."

She didn't pass up the opportunity to point out the importance of science and technology, both related to Christer's mission and in general.

Christer was thankful for all the kind words, and recounted how inspiring the incredible interest his mission had generated in Sweden had been. "I'm a bit surprised – and deeply honoured! – by all the attention."

He confessed he hadn't quite realised the extent of the interest in him and his mission. "There is a Swedish proverb that says 'shared joy is double joy'. And if you share the joy with nine million, that's quite a lot of joy."

He also shared the hopes of Maud Olofsson that his mission can inspire more young Swedes to study science and technology. "If we continue with our commitment to space, and hopefully even increase it, maybe more Swedes can go up into space eventually."

He ended by thanking everyone, especially the Swedish National Space Board, who helped and supported him throughout the years.

Then Christer was off to the next item on his busy schedule, a government lunch in Rosenbad. "And the WHOLE of the government will be there waiting for you", Maud Olofsson said.

Last spacewalk was the climax

And so it was, as Christer Fuglesang reported when he later arrived at the Swedish National Space Board offices in Solna for yet another event. "I've been to lunch with the government. Everybody wanted autographs for their children," he said with a broad smile.

At the Swedish National Space Board Christer, backed by a movie, remembered the cheerful reception the crew got when Discovery docked with the ISS and the hatch between the two craft was opened.

"There was a lot of hugging. Especially Thomas (Reiter, the German astronaut that had made up one third of the ISS crew the preceding six months) was very happy to see us. His bus home had arrived," Christer laughed.

Christer also spoke of the mission's fourth spacewalk, his third. "There were many improvisations. We had suggestions from the ground crew on how to assemble the tools. We had to make them longer and isolate them, since the solar arrays carry 160 volts."

The work itself was also largely improvised, Christer Fuglesang said. "We had to work by trial and error. The team work was amazing, between the two of us on the outside, the ISS crew, and the hundreds in the ground crew. And in the end we made it. That, for me, was probably the best part of the whole mission."

Later in the day he related how happy the ground crew was after the successful EVA. "They went out and partied late in the evening. We couldn't do that." On the other hand, the ground crew didn't get to float 350 km above the Earth either ...

He also freely admitted he was a bit jealous of those who got to stay onboard the ISS. But Christer's chances of making it back are good. "The probable time frame in that case is 2009/2010."

To conclude his official itinerary in Sweden, Christer visited his old university, the Royal Institute of Technology (Kungliga tekniska högskolan, KTH). In addition to having studied there, he was also very active in the social aspects of the student union. It was there that he met his wife-to-be, presently a researcher and an affiliated professor.

Jointly hosting the activities with KTH was Dagens nyheter, the biggest Swedish daily. The 160 seats reserved by SMS-booking by its readers had been gone in three minutes. The rest of the seats in the huge auditorium were in the main reserved for upper secondary school students.

Dagens nyheter's editor-in-chief, Thorbjörn Larsson, praised Christer Fuglesang's accomplishments as the paper's first weightless reporter. He also said that Christer hadn't been satisfied with aiming for the treetops, but had aimed for the stars, and that he was a shining example of patience and perseverance. He also assumed that the honour of "Stockholmer of the Year" and "Swede of the Year" were earmarked for Christer Fuglesang.

"I'm also Christer's employer," the vice-chancellor of KTH, Anders Flodström, chimed in smiling. "I don't doubt that he'll be named person of the year here at KTH also, and that's probably an even greater distinction!"

Anders Flodström also talked about how he had been to Florida for the launch, and the enormous spectacle with all kinds of arrangements around the launch. The whole of the old Apollo hangar were fitted out as a party area, with McDonald's, Kentucky Fried Chicken, and other representatives of American culture in each and every nook and cranny.

After a talk on the possibilities of life in space and a movie demonstration of the inside and workings of the ISS guided by the Spanish ESA astronaut Pedro Duque during the Cervantes mission, Christer Fuglesang entered the stage to thunderous applause.

"This was where I had my first lecture", he remembered. "I think it was 1-dim analysis. But I suppose that's not what you've come to hear", he said, laughing. "But that was a good starting point for space."

Christer Fuglesang then recounted his experiences before, during and after his mission, to an even more fascinated audience.

During the closing question time he told of a initiation event for new students at KTH where one of the assignments for the new students was to guess the colour of the Minister of Finance's door mat.

Christer also said that he didn't think the choice of academic subject was all that critical for anyone wanting to be an astronaut. "It won't hurt to have a background in science or technology. But most of all it's important to excel at what you do. And you only excel at something you like, so I strongly recommend doing what you are really interested in."

A victorious Roman general returning to the eternal city could hardly have had a more triumphant reception than Christer Fuglesang had this January. It was enormously stimulating as well as hard work for the Swedish ESA astronaut. But since he's made of the right stuff, the first is what he'll remember. Three spacewalks down the line, he has some experience to lean on ...