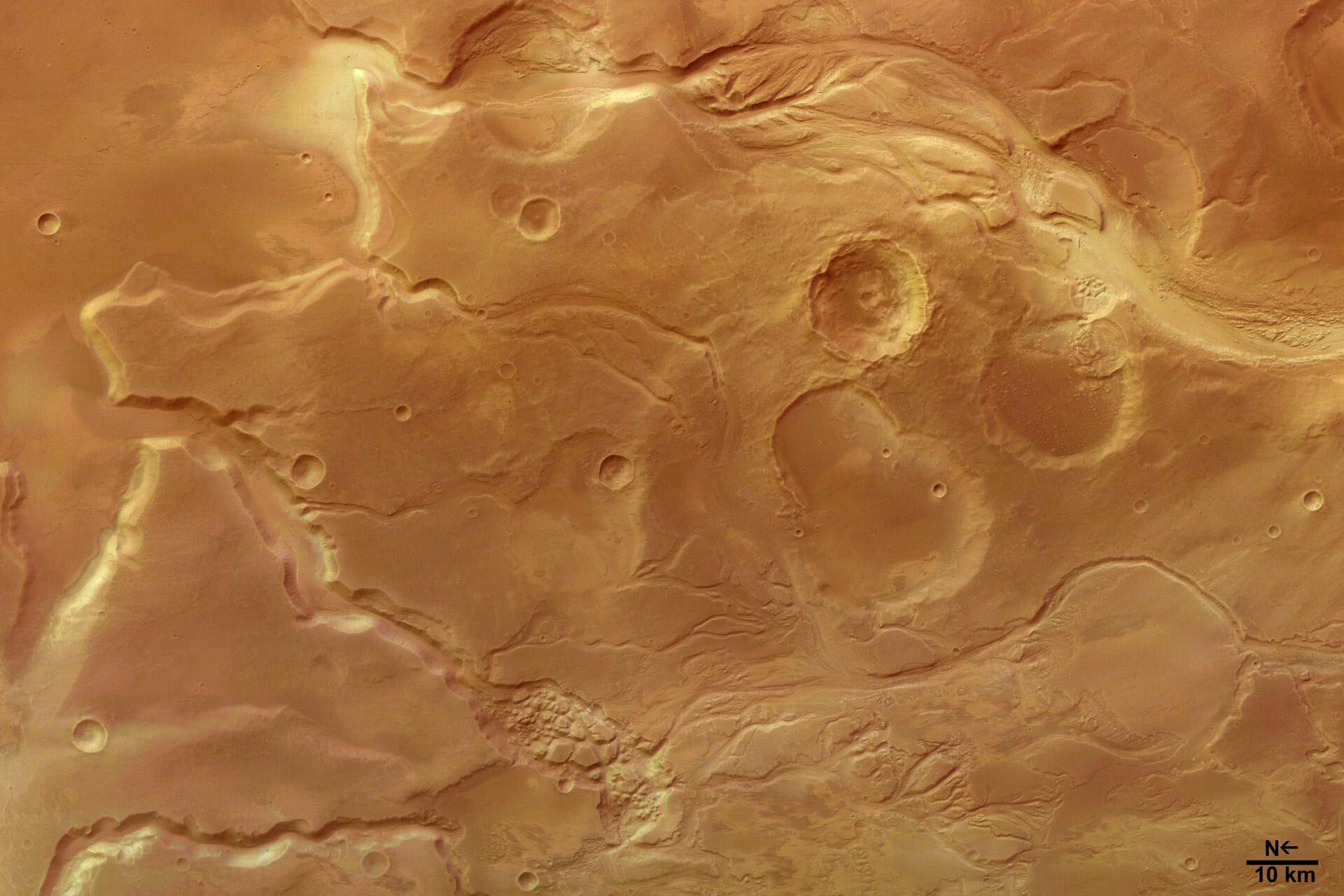 These images of fluvial surface features at Mangala Valles on Mars were obtained by the High Resolution Stereo Camera (HRSC) on board the ESA Mars Express spacecraft.

The HRSC has imaged structures several times which are related to fluvial events in the past on Mars.

The region seen here is situated on the south-western Tharsis bulge and shows the mouth of the Mangala Valles and Minio Vallis outflow channels.

The source of the outflow channel is related to the Mangala Fossa, a fissure running east-west for several hundred kilometres.

One theory about its formation is related to a process known on Earth as ‘dyke emplacement’.

This is when hot molten rock finds its way to the surface through a fissure, releasing large amounts of water by the melting of subsurface ice.

It is still unclear for how long and to what extent water, mud or even ice masses and wind have carved the channel here.

This theory on its formation has several analogues on Earth. Events like the one proposed for Mangala Valles occur on Earth, for example in Iceland, where volcanic activity causes episodic releases of water from subsurface reservoirs, causing catastrophic floods.

Along the channel troughs, areas with so-called ‘chaotic terrain’ features favour the idea of the existence of subsurface ice.

The small-scale chaotic terrain is characterised by isolated blocks of surface material which have been randomly arranged during the release of subsurface water and subsequent collapse of the surface.

Huge areas of chaotic terrain can be found near the source areas of the outflow channels around Chryse Planitia, such as Kasei, Maja and Ares Valles.

Beside the large outflow channels, a variety of smaller ‘dendritic’ valley networks with a number of tributary valleys can be seen near the main channels. This indicates possible precipitation.

The images were taken during orbit 299 with a resolution of 28 metres per pixel. The image centre is located at 209° E longitude and 5° S latitude. For practical use on the internet, the images have been reduced in resolution.

The red/cyan 3D anaglyph image was created using the stereo- and nadir channels of the HRSC. The perspective view was calculated from the digital terrain model derived from the stereo and colour information of the image data.

The 3D images require stereoscopic glasses to view. For more information on Mars Express HRSC images, you might like to read our updated 'Frequently Asked Questions'.