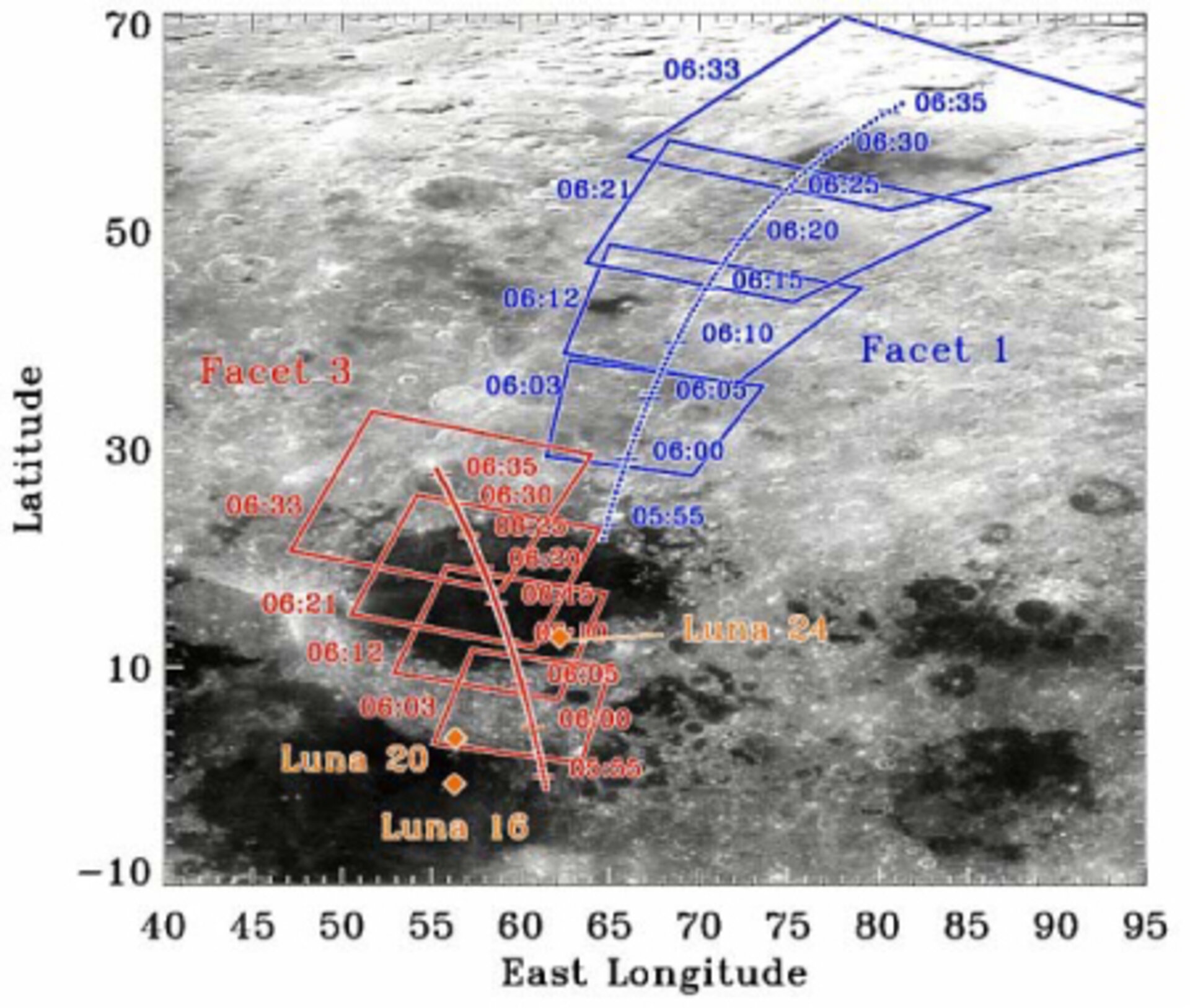 The D-CIXS instrument on ESA's Moon mission SMART-1 has produced the first detection from orbit of calcium on the lunar surface. By doing this, the instrument has taken a step towards answering the old question: did the Moon form from part of the Earth?

Scientists responsible for the D-CIXS instrument on SMART-1 are also announcing that they have detected aluminium, magnesium and silicon. "We have good maps of iron across the lunar surface. Now we can look forward to making maps of the other elements," says Manuel Grande of the University of Wales, Aberystwyth UK, and D-CIXS' Principal Investigator.

Knowing how to translate the D-CIXS orbital data into ‘ground truth’ has been helped by a cosmic coincidence. On 9 August 1976, the Russian spacecraft Luna 24 was launched. On 18 August it touched down in a region of the Moon known as Mare Crisium and returned a sample of the lunar soil to Earth.

In January 2005, SMART-1 was high above Mare Crisium when a giant explosion took place on the Sun. Scientists often dread these storms because they can damage spacecraft but, for the scientists responsible for D-CIXS, it was just what they needed.

The D-CIXS instrument depends on X-ray emission from the Sun to excite elements on the lunar surface, which then emit X-rays at characteristic wavelengths. D-CIXS collects these X-ray fingerprints and translates them into the abundance of each chemical element found on the surface of the Moon. Grande and his colleagues could relate the D-CIXS Mare Crisium results to the laboratory analysis of the Russian lunar samples.

They found that the calcium detected from orbit was in agreement with that found by Luna 24 on the surface of Mare Crisium. As SMART-1 flew on, it swept D-CIXS over the nearby highland regions. Calcium showed up here too, which was a surprise until the scientists looked at the data from another Russian moon mission, Luna 20. That lander had also found calcium back in the 1970s. This boosted the scientists’ confidence in the D-CIXS results.

Ever since American astronauts brought back samples of moonrock during the Apollo Moon landings of the late 1960s/early 1970s, planetary scientists have been struck by the broad similarity of the moonrocks and the rocks found deep in the Earth, in a region known as the mantle. This boosted the theory that the Moon formed from debris left over after the Earth was struck a glancing blow by a Mars-sized planet.

However, the more scientists looked at the details of the moonrock, the more discrepancies they found between them and the earthrocks. Most importantly, the isotopes found in the moonrocks did not agree with those found on Earth.

"The get-out clause is that the rocks returned by the Apollo missions represent only highly specific areas on the lunar surface and so may not be representative of the lunar surface in its entirety," says Grande; hence the need for D-CIXS and its data.

By measuring the abundance of several elements across the lunar surface, scientists can better constrain the contribution of material from the young Earth and its possible impactor to condense and form the Moon. Current models suggest that more came from the impactor than from Earth. Models of the Moon’s evolution and interior structure are necessary to translate the surface measurements into the Moon’s bulk composition.

D-CIXS was a small experimental device, only about the size of a toaster. ESA is now collaborating with India to fly an upgraded version on the Indian lunar probe Chandrayaan, due for launch in 2007–2008. It will map the chemistry of the lunar surface, including the other landing sites from where samples have been brought back to Earth. In this way it will show whether the Apollo and Russian landing sites were typical or special.

"From SMART-1 observations of previous landing sites we can compare orbital observations to the ground truth and expand from the local to global views of the Moon," says Bernard Foing, Project Scientist for SMART-1.

Then, perhaps planetary scientists can decide whether the Moon was indeed once part of the Earth.

The findings will appear in the Planetary and Space Science journal, in an article titled: "The D-CIXS X-ray spectrometer on the SMART-1 mission to the Moon – First Results", by M.Grande et al.