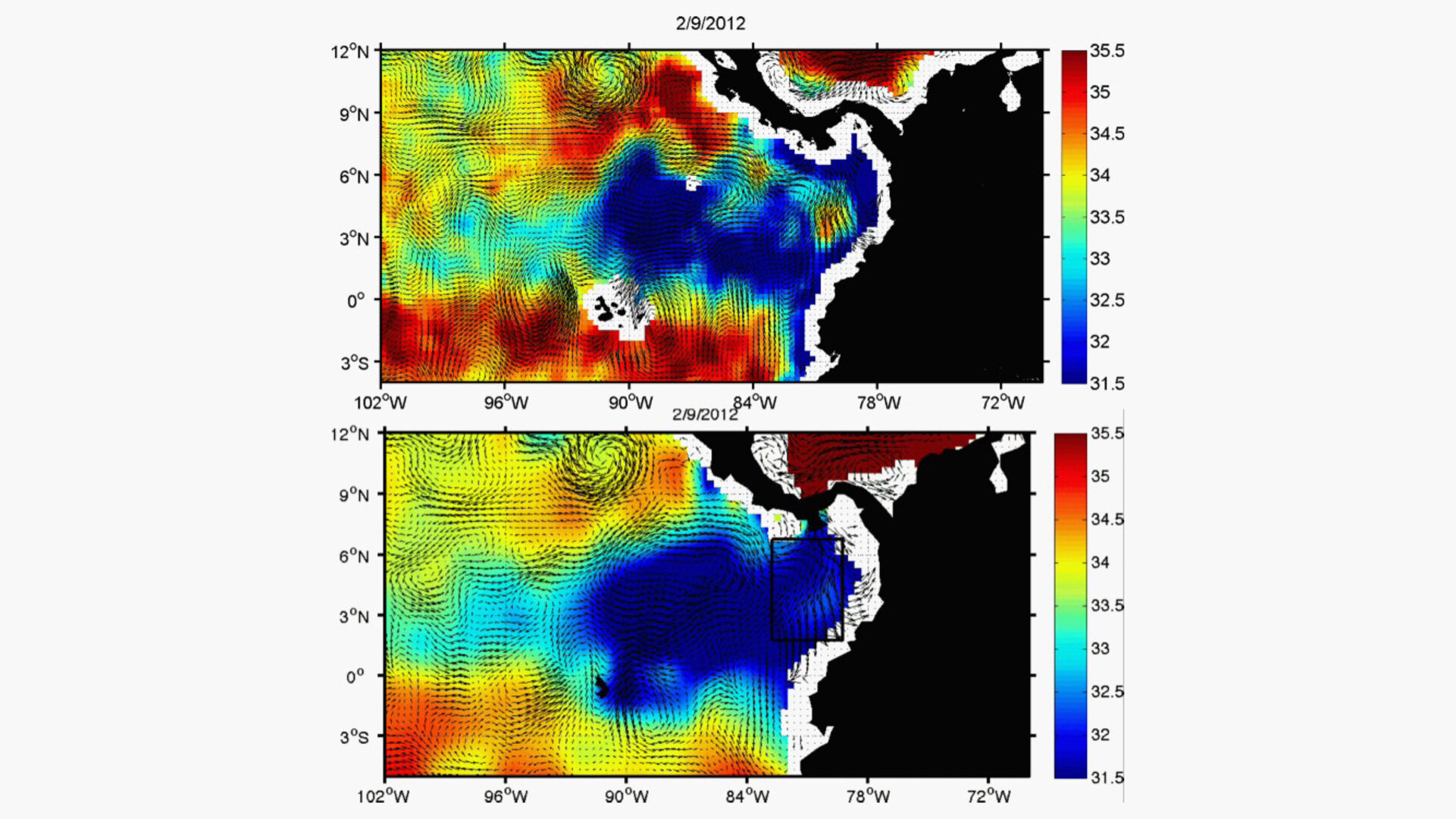 The saltiness of the oceans is being closely monitored from space by both ESA’s SMOS and NASA’s Aquarius missions, but in slightly different ways. By joining forces, researchers are exploiting these complementary missions to benefit climate science even further.

Everyone knows that seawater is salty, but it isn’t that obvious that the concentration of salt – the salinity – of the surface waters of the world’s oceans varies considerably with location and season.

Salinity is controlled largely by the balance between evaporation and precipitation, so it is an important component of Earth’s water cycle and closely coupled to weather and climate. It is also an important driver in ocean circulation, which in turn, is crucial in moderating the climate.

In fact, ocean salinity is an 'essential climate variable' – a key parameter of climate change.

Until the launch of SMOS in 2009 and Aquarius in 2011, global data on this important variable were simply not available. Scientists need this information to feed into the mathematical models they use to understand the complexities of the exchange processes between Earth’s surfaces and the atmosphere.

Thanks to both missions, these much-needed data are leading to a better understanding of the water cycle, how the ocean works and how salinity is linked to weather and climate.

While it has been shown clearly that their datasets agree and provide similar information, the differences in the data can be exploited to yield even more detail about variations in the salinity of our oceans.

For instance, the animation above shows the freshwater plume in the Pacific Ocean west of Panama as seen from both missions. This fresh pool is a consequence of heavy summer rains over Central America. Wind is also an important factor in the salinity of the water in this region.

To discuss the benefits and complementarity of both missions, scientists from around the world recently gathered in Brest, France.

Nicolas Reul from the French Research Institute for the Exploitation of the Sea, said,“This is the first time that scientists involved in these two satellite missions have met at an international workshop to compare ocean salinity data.

“SMOS and Aquarius are complementary by way of their spatial and temporal coverage and their viewing angles. By combining their data, maps of ocean salinity will be even more accurate and robust.”

Gary Lagerloef, the Principal Investigator of the Aquarius mission, added, “It is a great example of cooperation between Europe and the USA – a mutually beneficial exchange of information about scientific issues related to both projects.

"Our long-standing collaboration began during the development of both missions and is now deriving great benefit.”

SMOS has also been providing vital information about soil moisture, another important component of Earth’s water cycle. It is expected that the similar dataset from Aquarius will be available soon and will also complement that of SMOS.

In 2014, or soon after, NASA plans to launch its Soil Moisture Active Passive, SMAP, mission that will continue these observations.

ESA’s and NASA’s collaborative efforts therefore have future relevance for the exploitation of this next satellite.