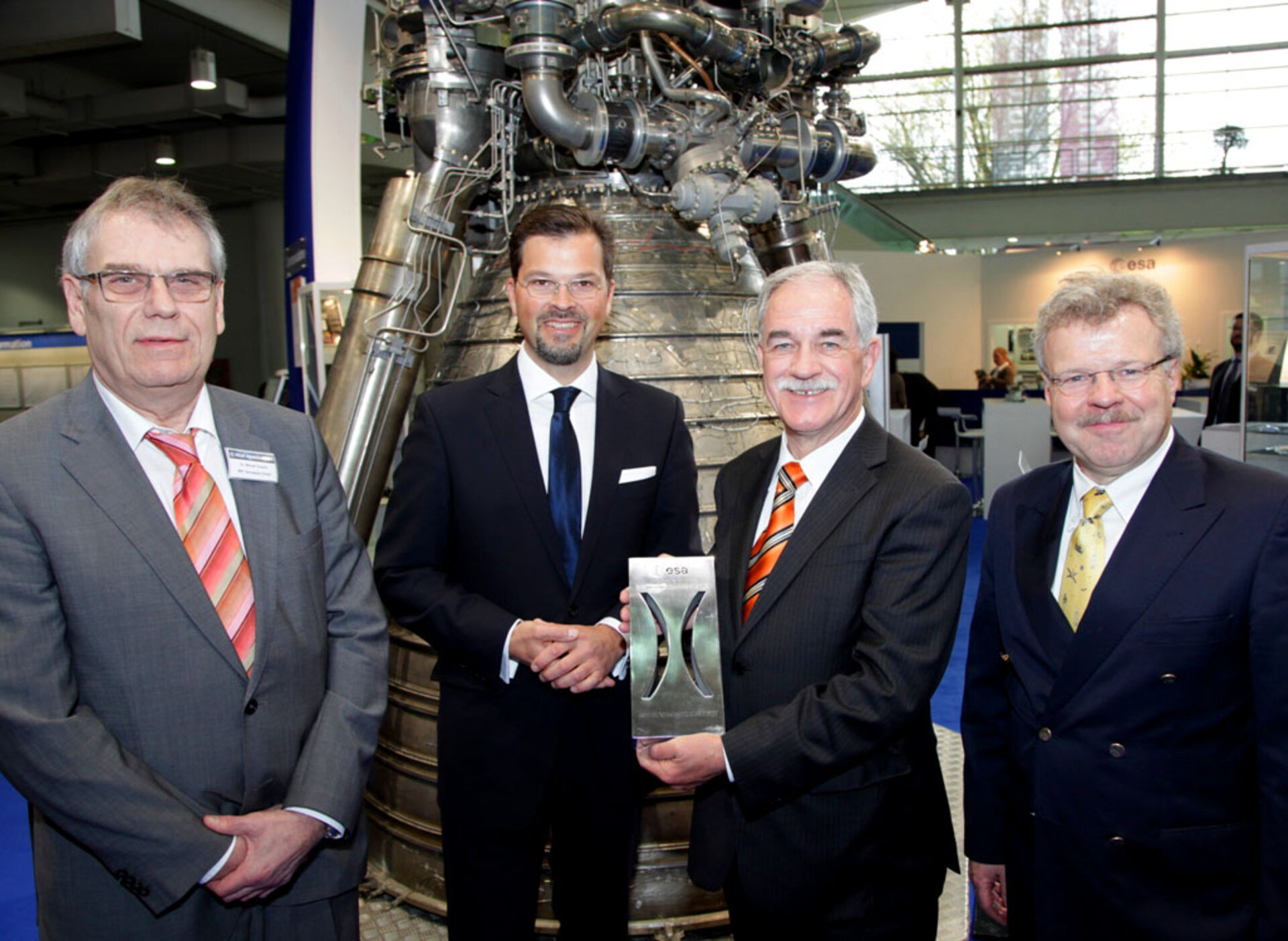 The 2012 ESA Space Spin-off Award has been made to German Astro- und Feinwerktechnik Adlershof for their terrestrial use of space technology expertise acquired from working on programmes such as the Cassini–Huygens mission to Saturn.

Applying it to tunnel drilling machines, engineers can now ‘see’ hazards some 40 m ahead in solid rock.

Among other projects, they worked on ESA’s Cosmic Dust Analyser for the Cassini spacecraft to explore Saturn along with Huygens, ESA’s Titan lander.

The company received the ESA prize for the success in spinning off their experience from space programmes to non-space applications, in particular for developing a system to look ahead into the ground in front of huge tunnelling machines while drilling. Here, sound wave transmitters and microphones are attached to the cutting wheels of the drill.

The sound bouncing back reveals boundaries between geological layers or pockets of water, which are displayed on a screen.

“Our transmitter ‘roars’ into the mountain,” says Mr Scheiding. “The waves can penetrate the rock up to 40 m in front of the cutting wheel. The reflected signals are received by microphones and visualised.”

It all started some 10 years back when one of the world’s leading tunnel drilling companies, German Herrenkneckt AG, had the idea of fitting transmitters and microphones on the blades of tunnelling machines.

Sound waves could locate discontinuities in the rock mass, which could reduce downtime and costs by preventing damage to the expensive blades.

“We were looking for a competent partner in acoustic design and vibration analyses,” said Andreas Kassel, a geophysicist with Herrenknecht AG, responsible for developing the prediction methods.

“We contacted MST Aerospace as we hoped they had already tackled similar vibration problems for launcher and space missions.

“We know that, for space, extremely reliable technical solutions are needed and that was what we were looking for.”

The company developed a transmitter prototype and tested it on a 9.8 m-diameter boring machine excavating the 1600 m-long Pannerdensch Kanaal twin tunnel near Arnhem, part of the Netherlands’ new 160 km Betuweroute freight railway line.

Astro- und Feinwerktechnik Adlershof GmbH was established in 1993 with staff primarily from the Berlin-Adlershof centre of the DLR German Aerospace Center, succeeding the Institute for Space Research at the former German Academy of Sciences.

The main mission of ESA’s Technology Transfer Programme is to facilitate the use of space technology and systems for non-space applications to take advantage of Europe’s investments in space research and developments to strengthen the competitiveness of European industry, and at the same time demonstrating the benefit of the European space programmes to Europe’s citizens.

The office is responsible for defining the overall approach and strategy for the transfer of space technologies and systems, including the incubation of start-up companies at ESA business incubation centres and related funding.

Together with its Technology Transfer Broker Network, the office has transferred over 260 technologies since the programme began and is supporting around 100 new start-ups a year.

It has also initiated as a limited partner the Open Sky Technology Fund, a €100 million venture fund which invests in start-ups using space technology.