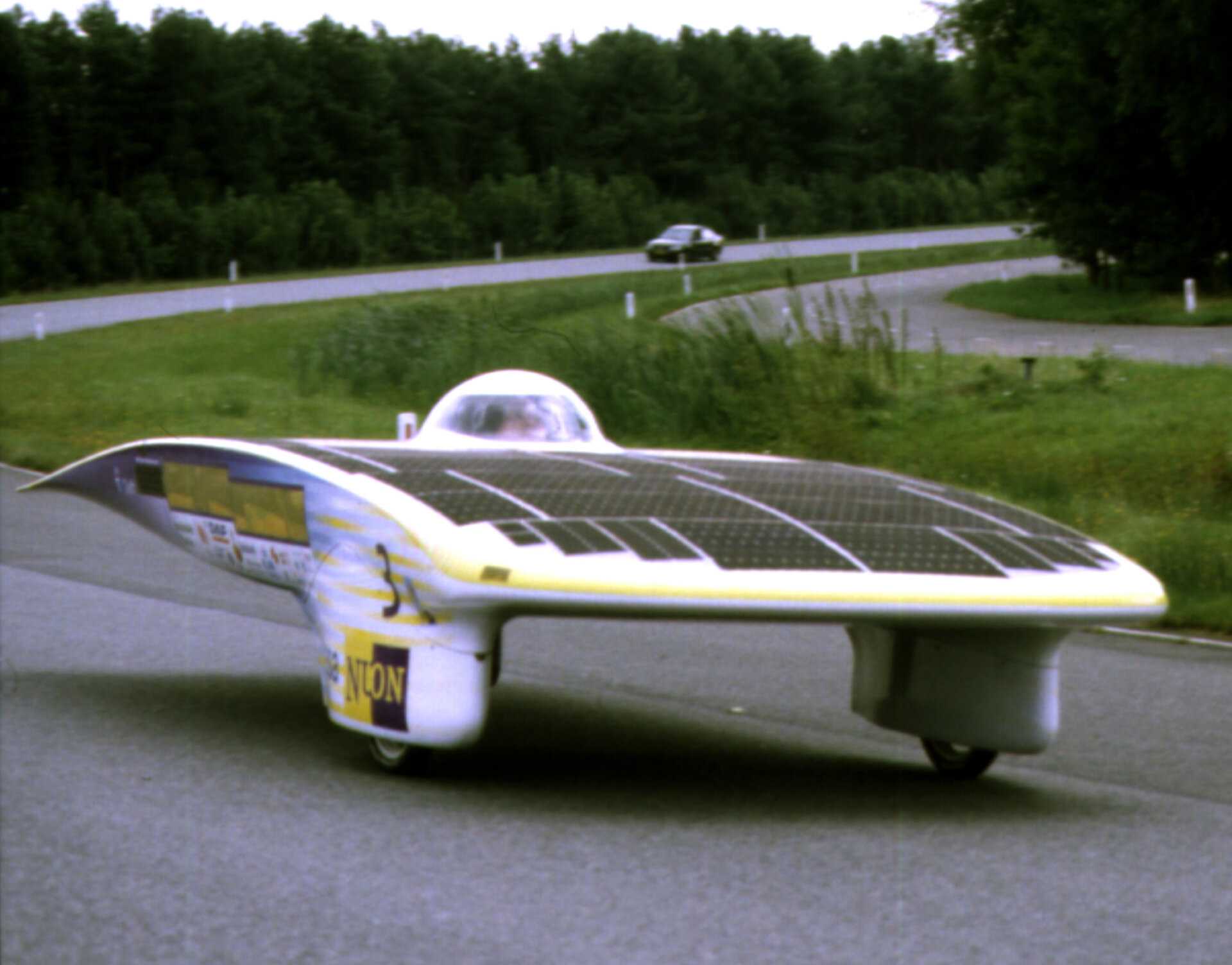 The Dutch Nuna vehicle, which will participate in the 3010 km World Solar Challenge ‘Solar Odyssey 2001’ rally through Australia this November, is on its way to Australia. Nuna is a solar powered racing car that uses the most recent European space technology and expertise.

Nuna will first be flown to Kuala Lumpur in Malaysia by KLM cargo. From there MASkargo of Malaysia Airlines will transport the car on to Australia. This Friday the Alpha Centauri racing team will also leave for Australia. Once they get there, the team of Dutch students, who designed and built the car, will be busy testing the car until the start of the race on 18 November. The test drives will also give the team members a chance to acclimatise.

Solar Odyssey 2001 is going to be a tough race. Driving from Darwin to Adelaide at the end of November involves crossing 3010 km of Australian desert during the hottest season. It will be a four-day battle against the elements. And yet 40 teams are keen to enter the competition.

Place your bets on Nuna as the winner - it is much more than an ordinary solar powered racing car. Nuna is partly fitted with solar cells which have actually been in outer space, as part of the Hubble Space Telescope. The Alpha Centauri Team, which built Nuna, is supported by Dutch astronaut and Delft University of Technology (TUD) Professor Wubbo Ockels.

If Nuna does win, it will be due in part to the use of space technology. The solar cells used all over the top of the car have never before been used in the race, and they have a very high efficiency. They are dual junction and triple junction gallium arsenide cells, with two or three layers. The sunlight that passes through the top layer, which would normally be wasted, is now used by the second or even third layer. The solar cells are such a recent development that the European Space Agency (ESA) has yet to use them in space. Their first space application will be at the end of next year when the SMART-1 lunar mission is launched. One of the jobs of SMART-1 is to test a solar powered ion engine. “No team has ever used such efficient solar cells on their car” says Ramon Martinez, a mechanical engineering student at TUD and leader of the Alpha Centauri Team, which also includes another five TUD students and two students from Amsterdam University.

“Nuna is fitted with 36 solar panels” explained Martinez, “their output is optimised by Maximum Power Point Trackers.” Maximum Power Point Trackers (MPPT) have been used in satellites for years. They optimise the output of the solar panels when they are in the shade, for example when the attitude of the satellite changes relative to the sun. ESA's Rosetta mission to comet Wirtanen, to be launched in January 2003, will also be equipped with MPPTs.

Martinez continued “Nuna will also occasionally be in the shade, which reduces the efficiency of solar cells. But the MPPTs will ensure that the solar cells supply a lot of power and will also stabilise the power. A chip measures the voltage supplied by a solar panel, compares it with the fixed battery voltage, and then determines the best voltage to charge the battery. In this way we can get an efficiency of no less than 97%. Of course, we also need a high-performance battery to operate effectively in poor weather conditions. Depending on the speed, we will be able to travel 250 to 500 km on a full battery.”

The batteries are also based on space technology. The 48 large Li-ion cells are connected in series and can supply the solar racing car with 5 kWh of electrical energy. They are specially developed for use in satellites, where high reliability is essential. Nuna's space technology has been made available to the team through ESA's Technology Transfer Programme.

“I think the whole car could easily be launched into space.” jokes Koen Boorsma, who studies aerospace engineering at TUD. He was responsible for the construction of the aluminium frame around the driver, as well as Nuna’s bodywork. “The whole car has to be light and strong. That’s why we built the bodywork in carbon fibre, reinforced on the outside with Kevlar. The Kevlar layer will protect Nuna against the impact of gravel during the race.” Kevlar is extremely strong and is used not only in bullet-proof vests but also in spacesuits, for protection against micrometeorites. Some walls of the International Space Station (ISS) are also reinforced with Kevlar to protect the astronauts.

The Alpha Centauri Team even considered the use of real space suits. Air cooling would adversely affect the aerodynamics of the racing car. As the temperature in the cockpit can be as high as 70°C, a space suit might help. However, in the small cockpit it would be too restrictive. Instead, the pilot will wear a cooling vest with ice cubes.

Another key factor in the race is good communications. From a support vehicle the team will collect data about the temperature and electrical current generated by the solar panels. This information will help the pilot to determine the strategy. “Should you try to drive away quickly from under cloud cover? Or should you try to save energy in that situation? Selecting the best racing strategy should help us to gain an advantage over the other teams.” said Martinez.

To power the GPS navigation system and telecommunications equipment of Nuna, two strips of solar cells measuring 32.5 x 9.1 cm are fitted on each side of the cockpit. These solar cells are the most exotic component of the vehicle as they have actually been in space. They were part of the solar panels of the Hubble Space Telescope. In 1993, after performing maintenance on Hubble, ESA astronaut Claude Nicollier brought them back to Earth. These solar cells are of such high quality that they can now be used to make Nuna a real solar powered racing car from outer space.

“Will we win? With this car we stand a pretty good chance.” concluded Martinez. “In theory, we should be able to reach a speed of 190 km/h. In practice it will probably be around 160 km/h, which would still be a record for a solar powered racing car. However, we will only reach that speed on a special test circuit, before the race. During the race itself on public roads the normal Australian speed limits will apply. Greatest competition is expected from the Australian Aurora 101 that won the 1999 World Solar Challenge and the car of the Japanese Honda team that has won twice before. We also have to beat the University of Michigan’s solar car that won the solar car race down Route 66 in July.”

Last year the average speed of the winner was slightly more than 90 km/h. The Alpha Centauri Team hopes to cross the 100 km/h boundary. If it meets this target, it would then also complete the race within a magical four days instead of five.