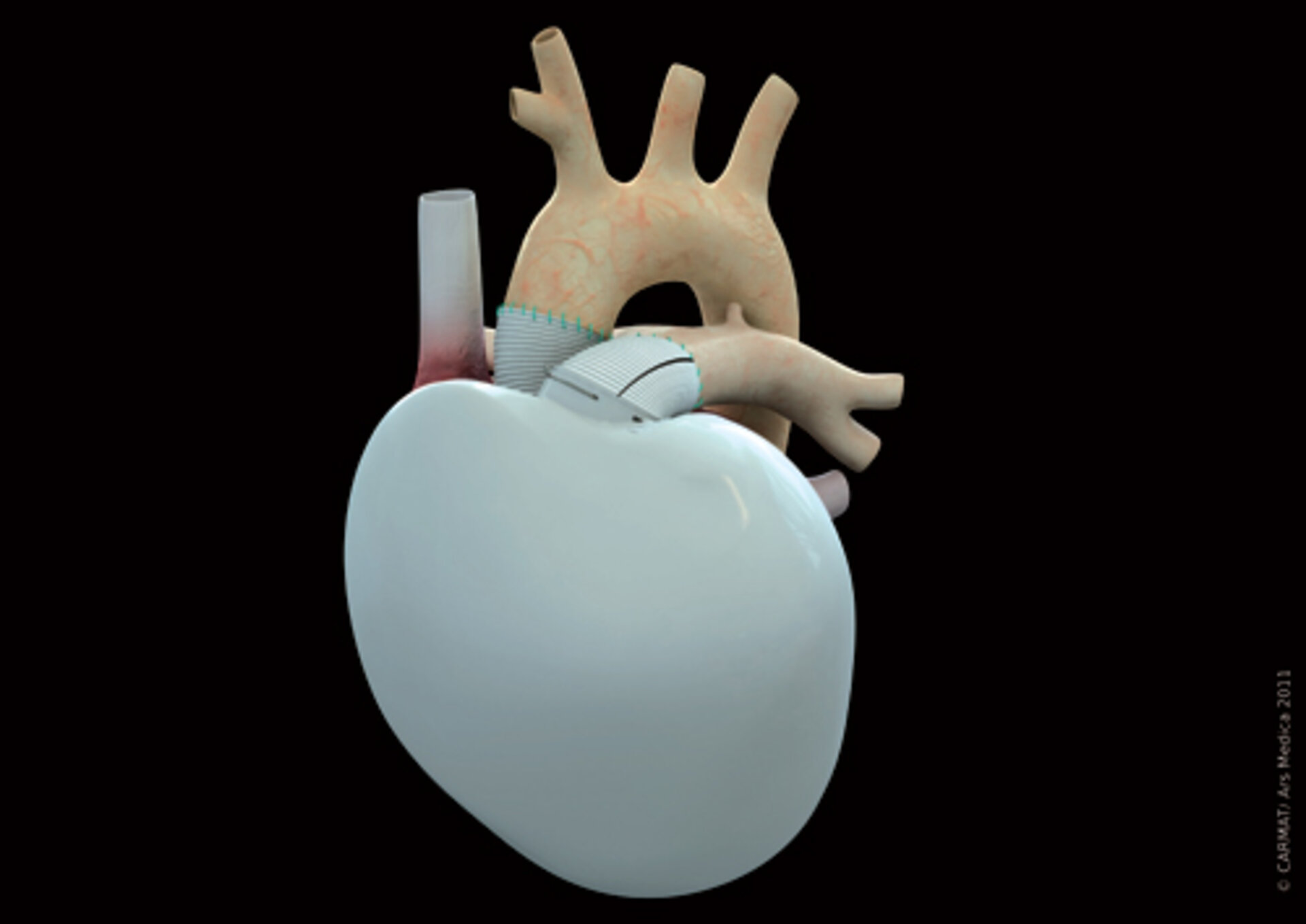 An artificial heart containing miniaturised space technology will soon beat inside a person, having now been approved for human trials in France.

With heart disease killing over 100 million people in developed countries alone and the demand for transplants far exceeding donations, creating a totally artificial heart has been the holy grail of cardiovascular medicine for half a century.

Brainchild of the visionary cardiac surgeon, Professor Alain Carpentier, the prosthetic is the result of 15 years of collaboration with aerospace giant Astrium, the space subsidiary of EADS. In 2008, with support from the French Government and investors, Prof. Carpentier founded the EADS spin-off company, Carmat, to complete the work.

It turned out that space had the ingredients that Carmat needed. Working closely with satellite engineers, the company applied Astrium’s expertise in building spacecraft to guarantee the necessary precision and durability for an artificial human organ like a heart.

Fashioned in part from biological tissue and in part from miniature satellite equipment, the device combines the latest advances in medicine, biology, electronics and materials science to imitate a real heart.

The team had to build a device that could withstand the tough conditions of the body’s circulatory system and pump 35 million times per year for at least five years without fail. They needed the ultimate in reliability, and the answer came from design methodologies, testing strategies and know-how for the electronics on satellites.

“Space and the inside of your body have a lot in common,” says Matthieu Dollon, Head of Business Development in Astrium’s French Elancourt Equipment team, who are working closely with Carmat on the heart.

“They both present harsh and inaccessible environments.”

Telecom satellites are built to last 15 years on their own in space, 36 000 km above Earth. The heart might be closer than a satellite but it is just as inaccessible.

“Failure in space is not an option.Nor is onsite maintenance. If a part breaks down, we cannot simply go and fix it. It’s the same inside the body.”

Equally, space engineers tolerate no interruptions or bugs in their electronics. Team member Dung Vo-Quoc, who designed some of the vital electronics for the heart, points out: “If your satellite stops working during the final penalty of the football world cup it’s disappointing. But if a heart stops beating for five seconds, it’s fatal.

“We try hard to make sure that every single part will function as planned for the duration of the device.”

It’s this need for long-term dependability that makes the quality threshold for space electronics higher than any other field. Every component has to be tested meticulously to make sure it will stand the test of time, even in the harshest conditions.Nothing is left to chance.

Every one of the 900 tiny components in the Carmat heart must function perfectly.Just as they would for satellites, the team used advanced modelling and digital simulation technologies and developed latest-generation test benches to perform thorough analysis.

For Carmat’s Technical Director, Marc Grimmé, it was a revelation, “I hadn’t realised quite how demanding the testing is for spacecraft. I knew the military had high standards, but in space the bar is even higher.”

That rigour has paid off. The French Health Authority has deemed the prosthetic reliable enough to authorise the first human implants in three approved hospitals in Paris. Doctors can now start selecting the first four patients to trial it inside their bodies.

“The countdown has started to the next phase,” says Marc Grimmé. “It’s a bit like arriving at base camp on Mount Everest and getting the authorisation to head out to the next level. It’s very exciting and very emotional.”

One of the challenges was to create a heart that would beat like the real thing and speed up or slow down depending on its owner’s exertion levels. Space had the answer here, too.

Based on technologies developed for European space projects, the tiny electronics in the prosthetic heart are the equivalent of those on the bus of a telecommunications satellite.

“Like the heart, a satellite needs to respond on its own to what’s happening around it,” explains Matthieu Dollon.

“It has a brain, the onboard computer, which gleans information from sensors about where it is in space and its environment, such as its position or temperature. It then commands the satellite to perform functions like pointing an antenna to Earth or rotating its solar wings towards the Sun.”

The heart contains the same technology, only 100 times smaller. High-tech sensors detect a patient’s exertion levels and transmit the information to a miniature computer. This commands the die-sized brushless motors to pump the heart faster or slower, allowing it to feed more or less oxygen to the body and control blood pressure depending on the person’s level of activity.

Another hurdle was to build a heart that the body might better accept. Previous artificial hearts have presented complications, with synthetic materials triggering blood clots that can travel to the brain and cause strokes. The Carmat prosthetic overcomes this by using animal pericardium, the membrane surrounding the heart, which has been chemically treated to reduce the host’s immune response.

The device has two chambers separated by a membrane with the biological tissue on the side in contact with the patient’s blood and polyurethane on the other. The miniaturised pumping system of motors and hydraulic fluids changes the membrane’s shape. It also uses biological material for the artificial valves created by Prof.Carpentier.

“The fusion of space technology with medical and biological sciences to create a potentially lifesaving organ is not only a feat of human engineering,” says Tech2Market’s Claude-Emmanuel Serre.

“It’s also a great example of how advanced space technology and expertise can benefit our lives here on Earth in a concrete way.”

As the first clinical trials on the Carmat heart begin, Mr Dollon adds, “It’s a bit like watching your first ever satellite launch into space on a rocket but even more emotional.”

Whereas satellites are commercial items, the heart is all about giving life: “If this heart made of biological material merged with space technology can help people live better, then we can all feel very proud of that achievement.”