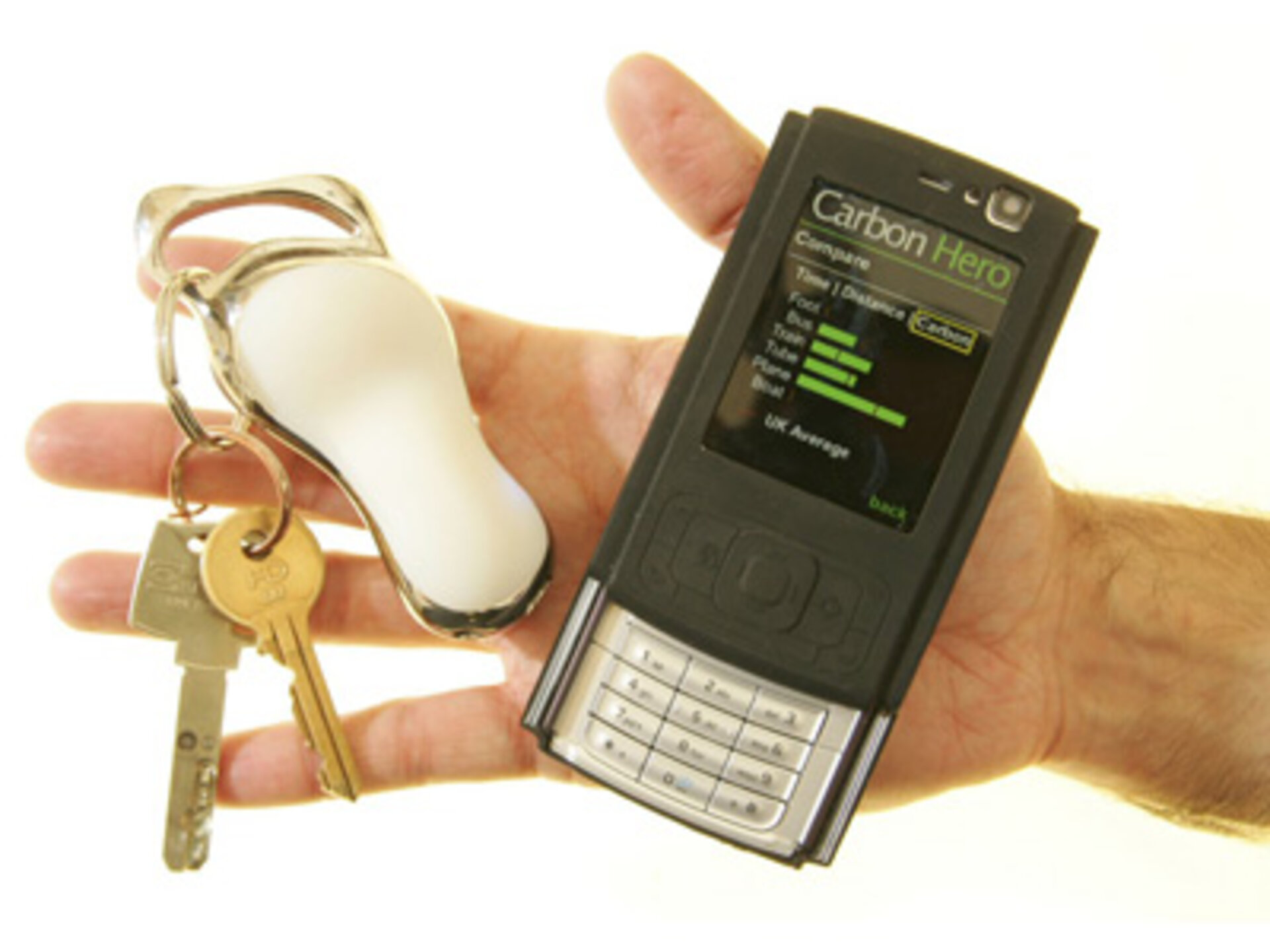 Concerned about global warming, many people are now looking for ways to reduce their generation of carbon dioxide (CO2). One option is to use public transport and limit journeys by car and plane; however, although this can significantly reduce each person’s carbon footprint, until now the benefits have been difficult to measure.

“With Carbon Hero calculating your carbon footprint is easy,” explains Andreas Zachariah, a graduate student from the Royal College of Art in London and inventor of Carbon Hero. “This easy-to-use mobile system uses satellite navigation data to calculate the environmental impact of travel. With its specialist database and algorithm, it can determine the mode of transport and its environmental impact with almost no user input.”

It was back in 2006, that Andreas Zachariah came up with the idea of a small and practical device to track personal CO2 emissions during travel. It determines the carbon footprint of travellers using different modes of transport by using satellite navigation data to measure the distance, identify the type of transportation and calculate the amount of CO2 released into the atmosphere through travel.

In April 2007, Oxford graduate student Nick Burch joined Zachariah in his effort to bring Carbon Hero to life. Burch has produced a number of open source, mobile and navigation location-based applications and with this expertise the team developed the device.

"We have now tested our application using GPS and it has proved to be very efficient. Once Galileo, the European global navigation satellite system, becomes fully operational its increased accuracy will aid Carbon Hero to measure journeys and then determine their carbon footprint," says Zachariah.

Galileo, a joint initiative of the European Commission and ESA, will provide a highly accurate, guaranteed global positioning service under civilian control. The system will deliver real-time positioning accuracy down to better than one metre, a range unprecedented for a publicly available system, and by using dual frequencies Galileo will guarantee worldwide high-integrity (Safety-of-Live Service) for safety-critical applications, such as maritime, aviation and rail, where guaranteed accuracy and availability is essential.

With Carbon Hero, to see the effect a journey is having on the environment you just need to look at your mobile phone. “The feedback loop is almost immediate,” says Zachariah.

It is also educational in that by giving an idea of the environmental impact of different types of transport - whether by train, plane, bike or by foot - it allows users to easily compare one kind of travel with another and calculate the environmental benefits daily, weekly and monthly.

“If you go on a diet you want to see if all that effort has made a difference so you weigh yourself. The beauty of our system is that it’s easy; you have a ’weighing scale’ on you all the time giving you your carbon footprint. When you make the effort to walk instead of taking the car you can immediately see the result, so it feels more worthwhile doing it and you are more likely to stick with it,” says Zachariah.

To be tested in industry

Zachariah and Burch have filed a patent for their invention and they plan to have Carbon Hero ready for beta-testing in a company by the beginning of the next UK financial year in April 2008. It will then be used to track a team, a department or the whole company throughout the financial year.

“We are now in a closed beta-testing phase verifying that all works well, fixing problems and improving the application. It is a live and kicking application working on mobile cellular phones; it has already been tested on the Nokia platform now we are moving to Blackberry,” says Burch, Carbon Hero co-inventor.

Sustainability is an important issue for governments, consumers, businesses and employees. Companies now want to show the efforts they are taking to reduce their carbon footprint.

“Green credentials don't just attract customers; they also attract employees who may have gone elsewhere," says Zachariah. “Companies that use Carbon Hero could present the results in their annual report, together with other ways in which they are helping the environment. It is easy to document carbon emissions from heating and electricity; now with Carbon Hero, companies can also document CO2 emissions from business travel. I'm also immensely proud that the EU has shown leadership with its '20% by 2020' carbon reduction goal”.

In addition to winning a regional prize in the 2007 European Satellite Navigation Competition, Carbon Hero was awarded the British Standards Institute (BSI) prize for Sustainability Design in July last year. It was a finalist in the 2007 Oxygen Awards and Deutsche Bank Pyramid Awards, and also invited to enter the Saatchi & Saatchi World-Changing Ideas Awards. It is now in the closing rounds of the 2008 St. Andrews Environmental Prize.

The main mission of the ESA TTPO is to facilitate the use of space technology and space systems for non-space applications and to further demonstrate the benefit of the European space programme to European citizens. The TTPO is responsible for defining the overall approach and strategy for the transfer of space technologies including the incubation of start up companies. For more information, please contact: