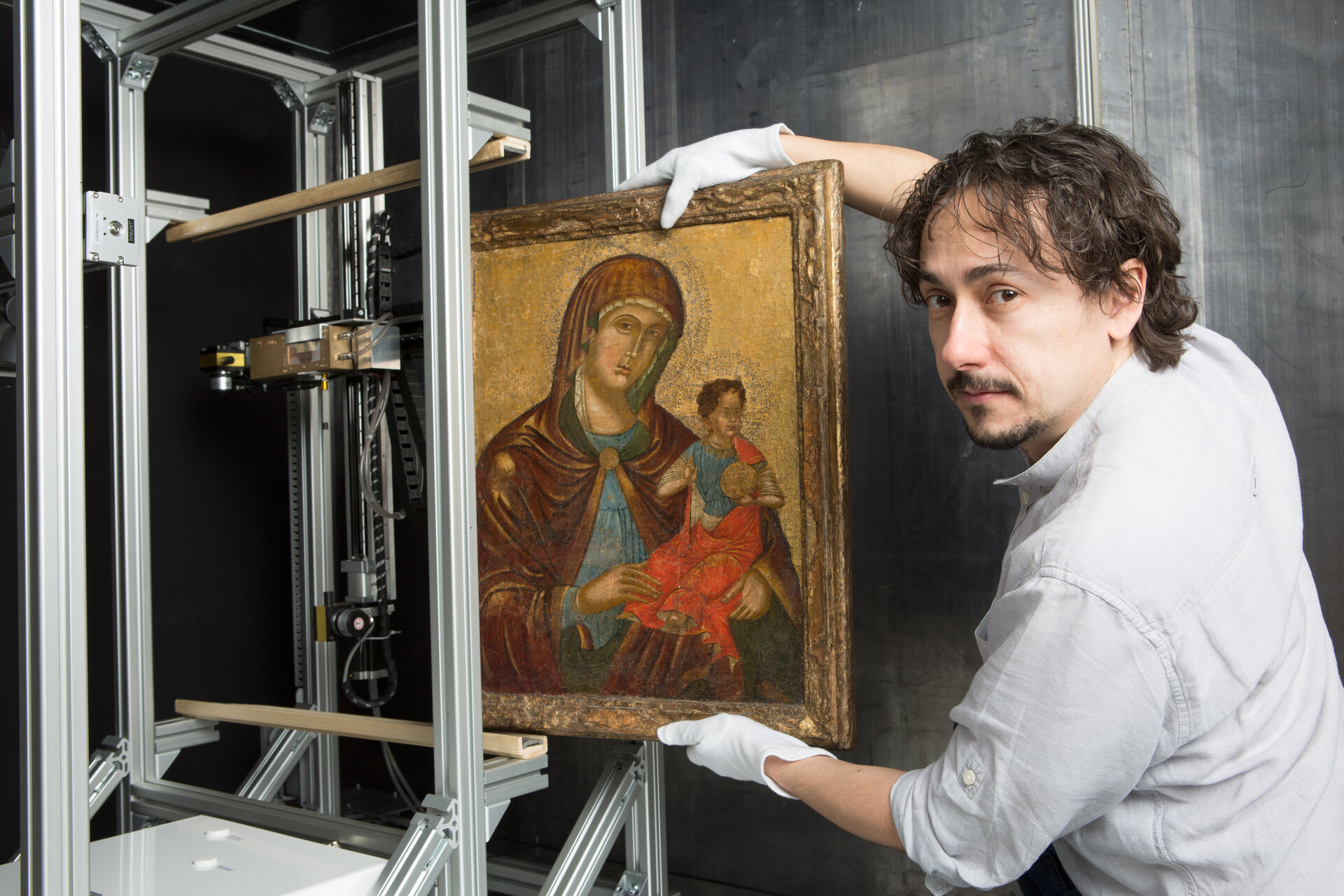 Authenticating artworks and uncovering forgeries has become much simpler thanks to a startup in ESA’s Czech Business Incubation Centre, using a sensor based on a radiation monitor currently flying on ESA’s Proba-V satellite.

“The art market is a jungle – some say that around 50% of art pieces and paintings are either fakes or are incorrectly attributed,” explains Josef Uher, CTO of Czech company InsightART, a start-up from the ESA Business Incubation Centre Czech Republic.

”This has huge consequences for the value of such artworks.”

The device unlocking these opportunities is the Timepix chip. Originally developed through CERN’s Medipix collaboration and used in the Large Hadron Collider, it was later incorporated into a satellite sensing instrument by the Institute of Experimental and Applied Physics of the Czech Technical University (IEAP CTU).

The key to Timepix is the way each pixel on the chip processes radiation and send signals independently of all the other pixels. Its design means it can capture very high levels of detail, and also measure the wavelengths and direction of incoming photons.

Tools using the same technology are also being developed for non-destructive testing of objects such as sculptures and aeroplane wings, and for medical imaging that could one day support better cancer treatment.

InsightART is using this combination of sensing properties to investigate artworks in a way that was previously only possible using huge synchrotrons, which are rare and hard to access.

“What we can do with this technology is reveal hidden structures in paintings, such as changes to the picture or where an original artwork has been painted over.”

A standard X-ray of a painting can show some of the detail hidden by the top layer of paint. However, with its Timepix-based sensing device, InsightART can ‘expose’ every different pigment separately. Each pigment can be assigned a colour to help with visual analysis, and by applying filtering they can show only the brush strokes made with a single pigment, such as lead paint, for example.

An art expert can then analyse the output to ascertain whether underlying images and/or materials are consistent with both the artist’s style and the date ascribed to the painting.

Setting a new standard in space radiation monitoring
In space, Timepix is producing equally impressive results. Originally flown on board ESA`s demonstrator satellite Proba-V in the SATRAM radiation detector, it has been shown to be both a successful imager and resistant to the effects of extreme radiation, such as that associated with the South Atlantic Anomaly, a weak point in Earth's magnetic field.

As a result, it will form the core of ESA’s Miniaturised Radiation Monitor (MIRAM) for future telecommunications satellites. Timepix radiation detectors have also been used on the International Space Station since 2012.

“It’s proven to be a fantastic development, even though it is very complicated and was only sent into space for the first time on Proba-V. It’s also very small compared with other radiation monitors, which is ideal for space.

“In future it could have many applications, such as being a neutron detector to help us identify the presence of water on other bodies in space [without an atmosphere].”

“This is how technology transfer should go, from fundamental research to applied research and then transferred to industrial partners,” explains Stanislav Pospíšil of IEAP CTU.

“The support from ESA was very important for that, not just in terms of financial support but also encouraging us to move from a prototype to a fully operational instrument that has been successfully operating on Proba-V for 5 years.

“I’m very proud of both that and all the terrestrial opportunities that are emerging from the original development.”

“This investment by ESA has given rise to a tool that has so many uses and can grow still further to be very successful,” says Pavel Habarta of TC CAS.

“Thanks to this new generation of detectors coming from the original research, and all the effort put towards developments for space applications, we are able to do all these amazing things,” says InsightART’s Uher.

“In future we want to combine our X-ray imaging with virtual reality to make it easier and more natural to use when scanning 3D objects. Ultimately this could even be used for medical applications – it will take time, but it holds so much potential.”

The network of 20 ESA Business Incubation Centres (ESA BICs) are forming the largest ecosystem in the world for space-related entrepreneurship and has fostered over 700 start-ups throughout Europe.

Spread over more than 60 cities in 17 countries, the centres provide together with national partners all the needed technical expertise and business-development support to their hosted start-ups, with currently more than 300 under the two-years business incubation development booster programme.

ESA's Business Applications and Space Solutions programme
The ESA BICs are part of ESA’s Business Applications and Space Solutions programme that co-funds projects and start-ups while offering technical and business support to companies that seek to deliver rapid innovation and raise private investment. Overall ESA spends €400 million a year on strengthening the competitiveness of European and Canadian companies in the global markets not only for satellite communications but also for downstream applications.

The IEAP (Institute of Experimental and Applied Physics) is a scientific-academic unit of the Czech Technical University (CTU) in Prague, one of the biggest and oldest technical universities in Europe. The institute was founded in 2002 as the experimental unit of CTU for research namely on particle and nuclear physics.

IEAP has been a central driver in development of other applications using the Timepix detector technology. Besides for ESA space oriented projects, IEAP has contributed to advancing the technology for non-destructive X-ray imaging and neutron radiography and tomography.

With the support from the Ministry of Culture of the Czech Republic the first mobile device for “Imaging and analysis of layered painting and polychromy of old arts” was developed in IEAP. In order to turn this new space related technology into a commercial business, also in other sectors, it was transferred to the spin-off partner Advacam. Another spinout from IEAP CTU that uses the same technology is Radalytica. This company develop applications using Timepix-based devices on robotic arms to enable non-destructive testing and investigation of tissues in small animals as a first step towards improving cancer treatment.