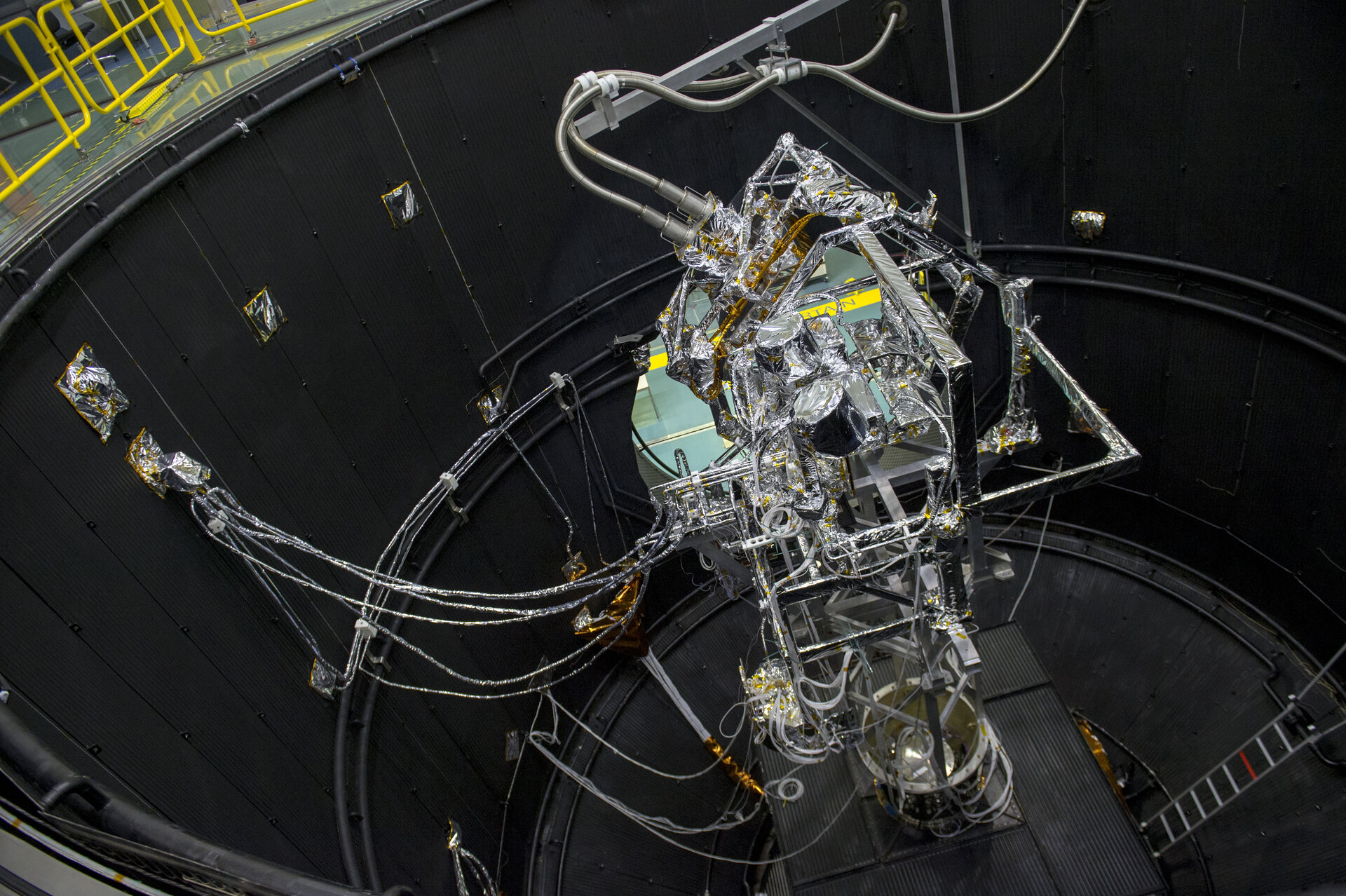 A perfect satellite test set-up inside ESA’s vast Large Space Simulator chamber – the only thing missing is a satellite.

“Next spring will see thermal vacuum testing of the payload module of Europe’s MetOp-C weather satellite,” explains Eric Bonnet of European Test Services, the company that operates the test centre in the Netherlands for ESA.

“In preparation, we have we have taken the all the test equipment out of storage and set it up in advance, to check it is still operating reliably.”

Next year’s test involves verifying the operation of MetOp’s instruments in space-like vacuum conditions. In order to do so, cryogenically cooled ‘blackbodies’ need to be fitted in front of the instrument openings or radiators.

Eleven blackbodies are required in all, their temperatures controlled to within 100–30ºC of absolute zero.

Accordingly, a complex structure has been designed to position these blackbodies as close as possible to the instruments, with piping variously supplying liquid nitrogen and helium gas, all covered with multilayer insulation to minimise any thermal effect on the satellite.

The payload module was represented by a simple metal structure with the same interface points as the satellite to come.

The team worked over weeks to prepare Europe’s single largest vacuum chamber. “Normally we would have performed this activity closer to the actual MetOp-C test campaign,” adds Eric. “But between now and then the chamber will be used for the thermal vacuum testing of the Mercury Transfer Module of the BepiColombo mission.

“This will also be challenging, using the chamber’s Sun simulator, which has been reconfigured to attain the high solar flux prevailing in the vicinity of the innermost planet, up to 11 000 W/m2, as well as simulating the release of xenon gas from its electrical propulsion system.”

The Large Space Simulator is part of ESA’s Test Centre in Noordwijk, the largest facility of its kind in Europe, with a full set of satellite testing facilities under a single roof.

MetOp is a set of three polar-orbiting satellites whose temperature and humidity observations have helped to improve weather forecasting. MetOp-A was launched in 2006 and MetOp-B in 2012, with MetOp-C planned to follow them.