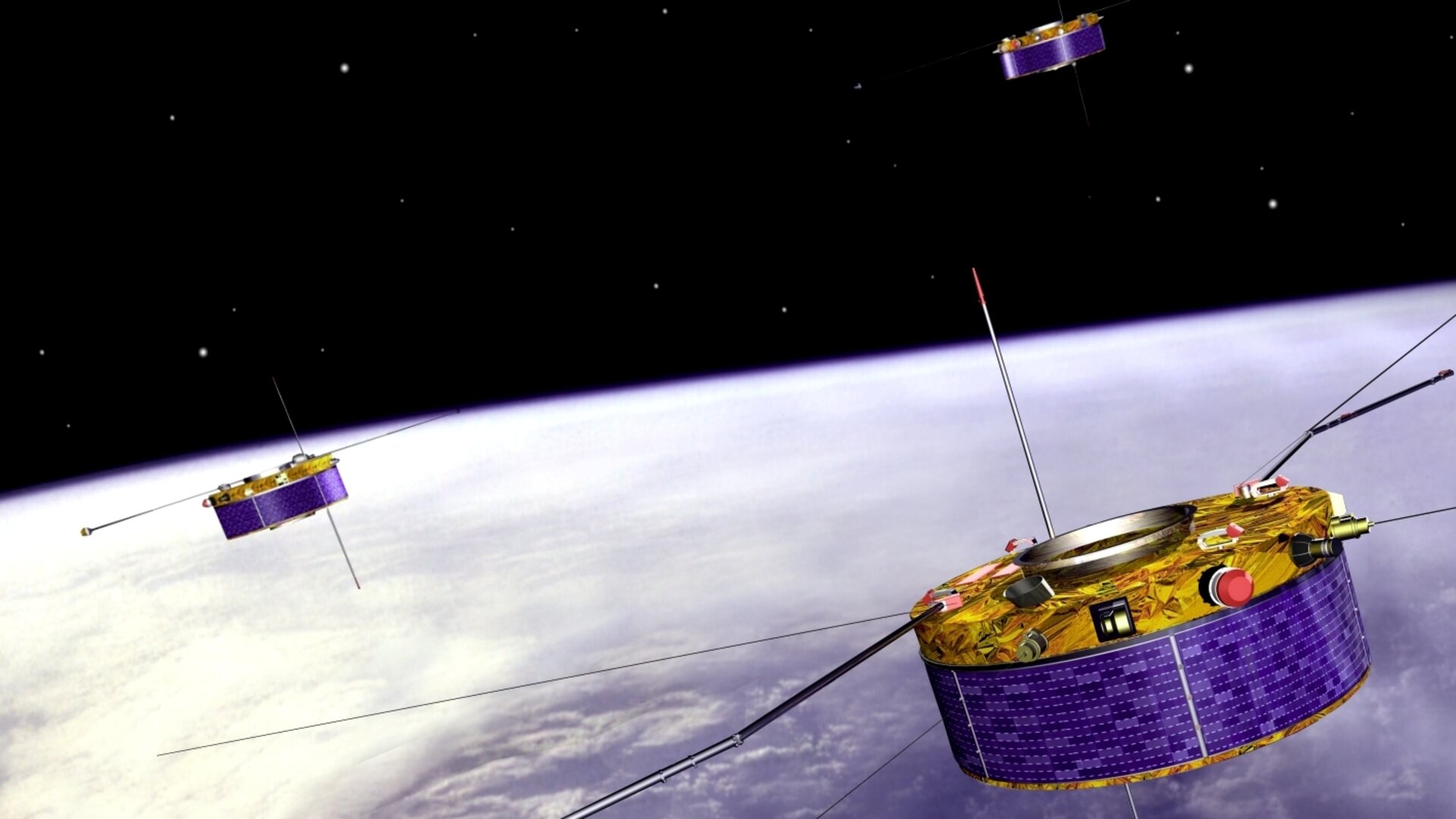 Aiming to study Earth’s ‘bow shock’ in the solar wind, the constellation of Cluster satellites is being rejigged to bring two of the four to within almost touching distance.

ESA’s Cluster quartet, in orbit since 2000, is studying the detailed structures of Earth’s magnetosphere – our protective magnetic bubble – and its environment in 3D.

The four identical satellites fly in highly elliptical orbits between 600 km and 20 000 km apart, depending on the regions that each satellite’s set of 11 identical instruments is studying.

This month, satellites 3 and 4 will be manoeuvred to within about 6 km of each other, adjusting the formation to observe activity at Earth's bow shock – the region where the solar wind decelerates from super- to subsonic speeds before being deflected around our planet.

“The scientific aim is to have a pair of satellites orbiting a few kilometres apart in the free solar wind just ahead of the bow shock, to collect data at very small scales,” says Detlef Sieg, a flight dynamics specialist working on Cluster at ESA’s Space Operations Centre in Darmstadt, Germany.

This requires careful calculations of orbits and thruster burns, lining up Cluster 3 and 4 in almost the same orbit while ensuring they can’t collide during this close-formation period.

Since there is no communication between the satellites and we know their positions only to within a few hundred metres, they must be flown carefully from the ground to prevent any collision risk.

“During each orbit, they cross almost the same two points just three seconds apart. Between, they are side by side and one overtakes the other.”

The ultra-close alignment was achieved on 7 January, and they will stay like this until mid-March.

During this two-month alignment, the other two satellites will maintain more or less steady positions with respect to the first two, about 5000 km away.

“Adjusting the formation requires plenty of teamwork and coordination, not only among teams in Darmstadt but also with the Joint Science Operations Centre in the UK and the Payload teams,” notes Cluster operations manager Bruno Sousa.

“We also work to optimise fuel usage and eliminate any risk of potential collision, though this only becomes really significant if we go down to 1–2 km separation.”

The two satellites will be so close that, as seen from a ground tracking station, both will be in the same slice of sky. This allows a single station to communicate with them simultaneously on different frequencies.

However, this time-saving technique requires validation so, for now, only one will be tracked at a time (more about Estrack).

Getting up close to Earth’s bow wave

This is not the closest separation achieved between two Cluster satellites – that was just 4 km in 2013 – but it is the first time that two have come so close at the bow shock, which typically occurs some 90 000 km above Earth.

“This enables us to study physical processes such as plasma heating and acceleration at the bow shock,” says Philippe Escoubet, the mission’s project scientist.

“Previous studies of the bow shock have shown electron heating over distances as small as 16 km, but we want to see what is happening using two satellites at smaller scales.”

These observations are one of the main aims for the 2015–16 mission extension, which was agreed by ESA’s Science Programme Committee in November 2014.