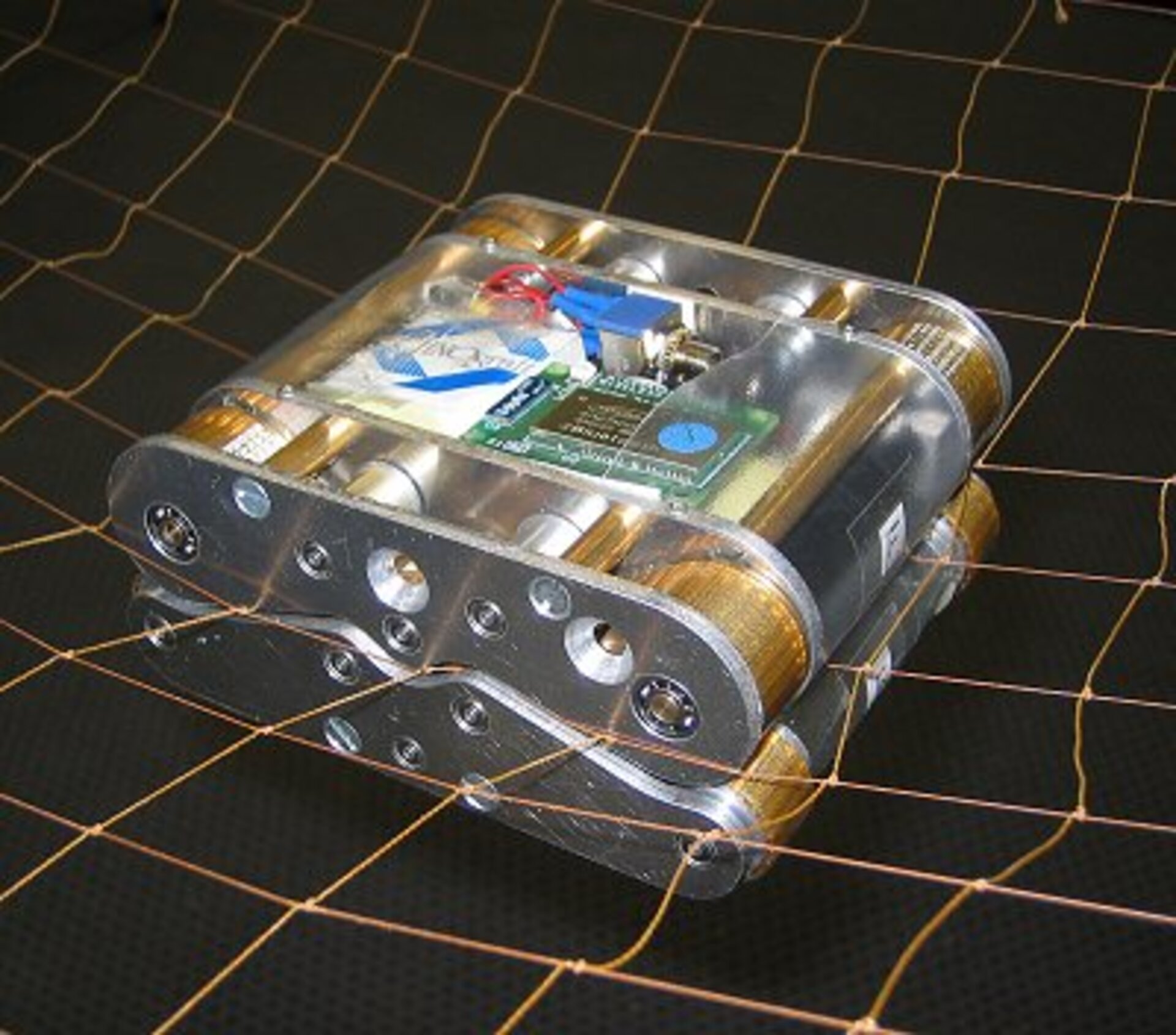 Robotic 'spiders' could be the key to building large-scale structures in space, according to ESA's Advanced Concepts Team. The tiny mechanical spiders would inch their way across large nets of fabric in space performing small tasks or lining up to create an antenna or some other structure.

The concept is known as a Furoshiki satellite after the Japanese word for a cloth used to wrap up possessions. It could revolutionise satellite-based applications such as telecommunications, navigation and Earth observation using radars, by providing cost effective large antennas in space that can be launched on relatively small rockets.

The Japanese Aerospace Exploration Agency (JAXA) is planning to test a Furoshiki spacecraft in January 2006. Assisted by ESA's Advanced Concepts Team, it has chosen the robotics institute of the Vienna University of Technology to develop the small robots. The Vienna team is led by Prof. Kopacek, who is known for his world championship victories in robot soccer!

The experiment will be launched in a compact configuration aboard a Japanese sounding rocket. Once in space, the mother satellite will deploy three 'daughters'. These will pull out a woven net into a triangle, leaving the mother satellite at the centre. Once the net is deployed, two palm-sized robots will 'crawl' along the net into prearranged positions.

Because the test is only taking place on a sounding rocket, the satellites will not actually go into orbit around the Earth. Instead they will be placed on a suborbital trajectory that will loop up into space before falling back and burning up in Earth's atmosphere. The experiment will experience around 10 minutes of weightlessness. During that time, the 40-metre-long triangular net will take between 3–5 minutes to deploy and then the robots will take a further 3–5 minutes to crawl out from the mother satellite to prearranged positions.

Tiny cameras on the mother and daughter satellites will send images of the deployment and crawling test back to Earth for analysis. "I hope that we can demonstrate for the first time that it is possible to move along a very thin, free floating net in a controlled fashion," says Leopold Summerer from ESA's Advanced Concepts Team.

To do this, the team have created a cunning system of wheels for the robots that can grip both sides of the fabric in order to not loose the net when there is no gravity.

Another aspect of the test is for the four satellites to line themselves up in space and transmit a synchronized signal to the ground. So each satellite must know the locations of the others and then adjust its radio output accordingly. To do this, the satellites exchange radio signals and use tiny jets to line themselves up. They will then listen for a pilot signal from the ground. Once they receive this, they will begin transmitting their response. The technology required to do this was developed at Kobe University of Japan.

This is the first small step towards satellites that collect solar energy using large arrays of solar panels and then beam the energy down to Earth. Such satellites could revolutionise the Earth’s energy supply systems by providing large amounts of clean solar energy. "A solar power satellite would need very large structures for its solar panels and antenna. Small experiments like this can help us mature the technology needed to build them," says Summerer.