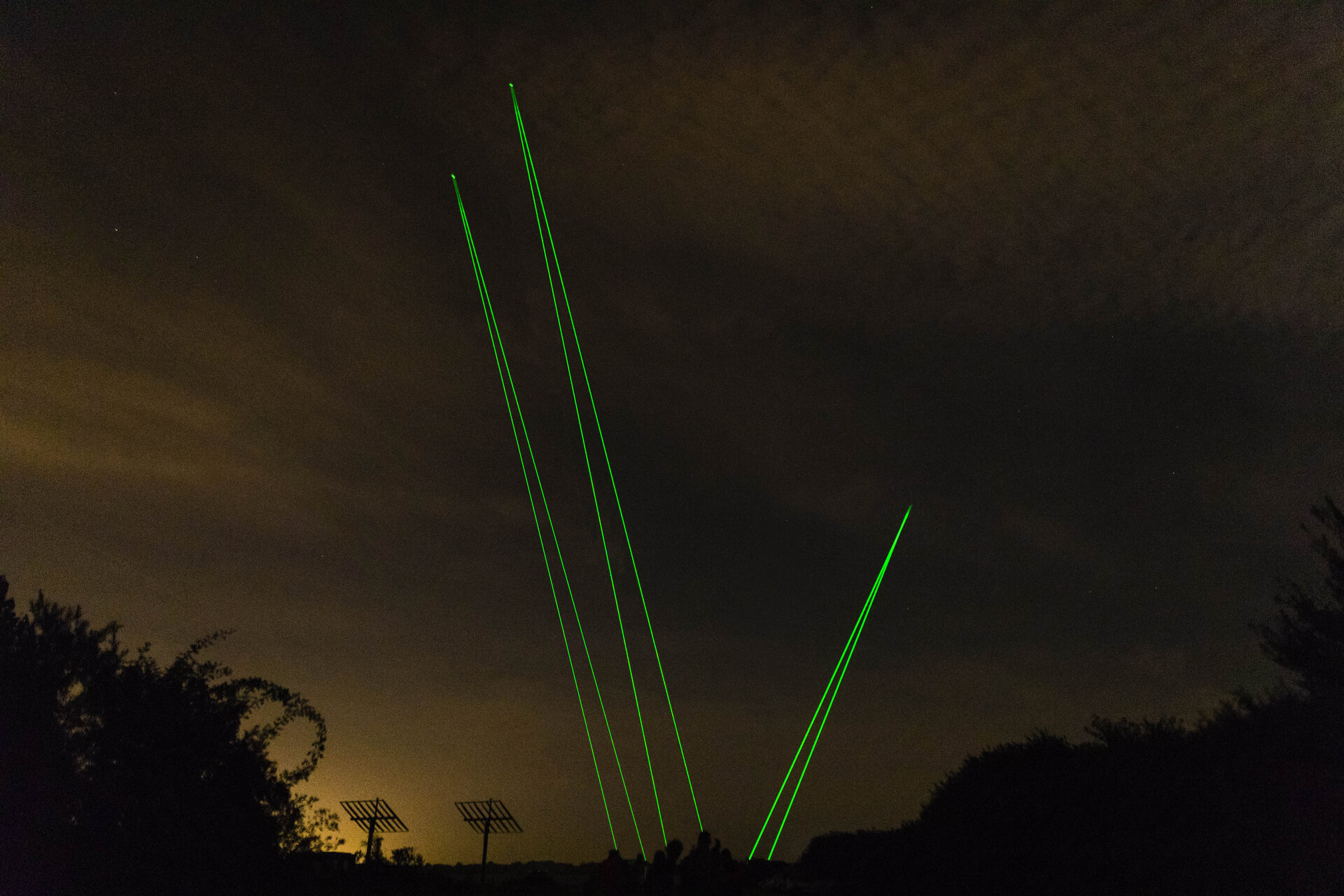 There is a lot of space debris floating around our planet. Down on Earth, we hardly notice. To raise awareness, Dutch artist Daan Roosegaarde has created his Space Waste Lab, including a spectacular laser light installation, on display at KAF in Almere from this Friday, 5 October.

When you look up at the sky, the chances are negligible you’d spot any space debris. But in December 2017, it was possible on the Maasvlakte in the Dutch city of Rotterdam.

There, on a remote sandy beach, Dutch artist Daan Roosegaarde tested his new art project: Space Waste Lab. By pointing powerful light columns to the heavens, Roosegaarde creates an arrow of light that points directly at a piece of space debris.

“It was a very special sight to behold,” says ESA engineer Michel van Pelt, who advised on the project. His involvement had begun two years earlier during ESA's Open Day at its ESTEC test centre in Noordwijk.

“A member of Studio Roosegaarde visited our Clean Space stand. At that time, the studio was working on the Smog Free Project, targeting reducing air pollution. Daan views space debris as 'the smog of the Universe'.”

ESA's Clean Space team includes leading experts in the field of space debris. One of the projects the team is working on, e.Deorbit, is a mission to catch and dispose of a derelict ESA-owned European satellite.

There are around 29 000 items of debris more than ten centimeters in diameter now in orbit around earth, posing a danger to working satellites and the International Space Station. “Very large and solid objects, like rocket parts, can also hit the ground after re-entering the atmosphere,” Van Pelt adds.

On any given moment, ten large pieces of space debris the size of a satellite or a rocket stage are floating right above your head, explains Van Pelt. Artist Daan Roosegaarde wants to give these objects a face with his Space Waste Lab.

Over four weekends, the Esplanade square in Almere will host a live performance, where light columns will point towards objects that are flying overhead. “What makes the live performance unique is that the objects are really flying overhead at the moment that they are shown”, says Van Pelt. “The system uses data provided by tracking services that keep an eye on space debris.”

Aside from the live performances – which will be held on 5-6 October, 9-10 November, 7-8 December and 18-19 January 2019 – the Kunstlinie Almere Flevoland (KAF) will also host an indoor exhibition. One video projection will use actual debris data to show the debris flying over Almere, while another will show Earth’s overall debris halo from space.

The impact of space debris

The indoor exhibition will also display ESA-provided artefacts, including test plates simulating a 7 km/second debris strike and part of a solar panel from the Hubble Space Telescope that was actually flown and left with debris craters after eight years in orbit.

“We are also showing the titanium fuel tank of the top stage of a Vega rocket,” adds Van Pelt.

“When tanks like these reenter our atmosphere after launch, they don't always burn up entirely and can crash on Earth. To reduce risks for people living on Earth, launch organisation Arianespace brings Vega upper stages back down in a controlled manner, to crash in a designated area in the ocean, where they cannot harm anyone.”

The goal of Space Waste Lab is to create a 'living laboratory', where the public not only gets to learn about space debris but also gets to act as a potential source of creativity. Dutch ESA astronaut André Kuipers also advised Daan Roosegaarde, along with NASA sources.

“I’m a strong believer in cooperation between technologists and artists,” says Franco Ongaro, ESA Director of Technology, Engineering and Quality. “We believe in what we do as a service to society, but we are often unable to communicate its worth effectively enough. Artists not only communicate vision and feelings to the public, but help us discover aspects of our work which we are often unable to perceive.”

“This cooperation is all the more important when dealing with issues like space debris, which may one day impact our future, and our ability to draw maximum benefits from space. We need to speak in different ways, to convey not just the dry technological aspects aspect of technology, but the emotions involved in the struggle to preserve this environment for future generations.”