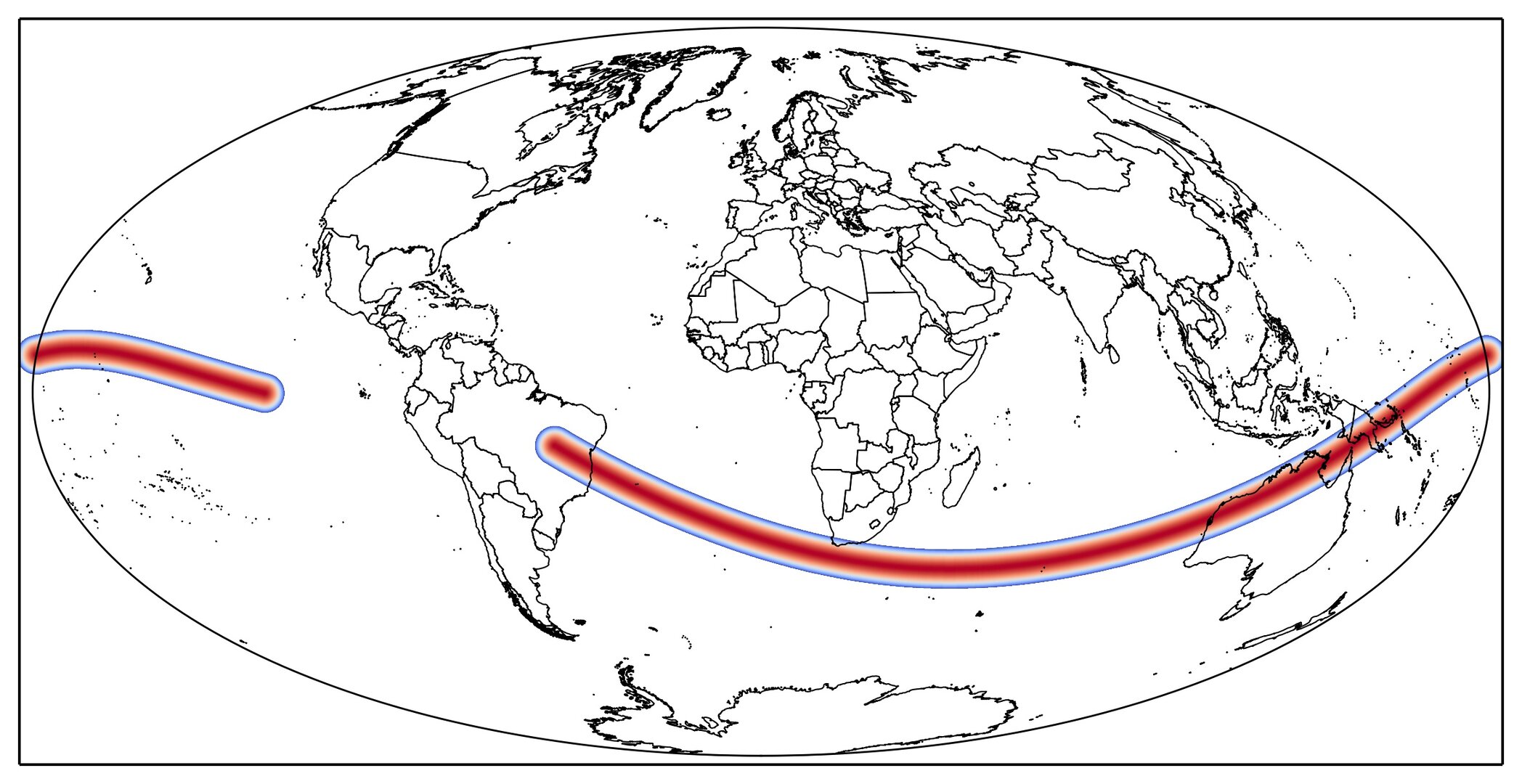 A thick red line snakes across Earth’s surface – a ‘risk corridor’ for the possible impact of an asteroid, based on its observed trajectory through space.

Researcher Clemens Rumpf has been working on a software system called ARMOR, Asteroid Risk Mitigation and Optimization Research tool, to model potential asteroid impact sites and their consequences for humanity. Today, Asteroid Day 2016, finds him in the midst of a three-month visiting researcher assignment to ESA’s Advanced Concepts Team thinktank, which is well acquainted with asteroid deflection research.

“I’ve been working on ARMOR as part of my PhD research at the University of Southampton,” explains Clemens. “Asteroid risk assessment currently relies on the Torino and Palermo scales, but these are abstract numbers that don’t communicate practical consequences of an impact.

“ARMOR attempts to express the results of an asteroid impact in a way that is directly comparable to other natural disasters, using the same methodology that governments already employ. In the case of flooding, for instance, once past a certain risk threshold, the decision is made to deploy responders and build up sandbags.

“For asteroids, the appropriate response might be to allocate extra telescope time to narrow down our uncertainty about the asteroid orbit, or actually despatch a space probe to observe it locally to rule out any threat, or, ultimately, plan out a deflection operation of the kind ESA’s proposed Asteroid Impact Mission will participate in.”

The fundamental risk equation – as adopted by government policy-makers – equals ‘probability’ (how likely is the event to happen?) multiplied by ‘exposure’ (how much of a populated area would be exposed to the event?) and then ‘vulnerability’ (how violent would the event actually be?). ARMOR can produce results to this equation for observed Near-Earth Objects, expressed in terms of expected casualties, for potential impacts up to a century into the future.

“Our collective exposure and vulnerability to an asteroid strike can be very high, with severe consequences during a large impact event, but there is a generally low impact probability, with a low frequency of large-scale asteroid impacts across history. Thus, risk of large impacts is relatively low on an everyday basis.

“But, of course, smaller-scale asteroids are hitting Earth all the time – you only need to look up to the night sky to see shooting stars caused by dust-sized specks. And a global network of infrasound stations originally set up to detect illicit nuclear explosions have revealed Hiroshima-scale airbursts occurring in the atmosphere about once or twice a year as larger bolides explode. The large airburst over Chelyabinsk in 2013 demonstrated palpably that we shouldn’t be complacent.”

ARMOR sources its asteroid data from the International Asteroid Warning Network, an initiative by global space agencies and professional and amateur astronomers to detect and monitor NEOs, based initially on visual observation with radar imaging possible for nearby bodies.

“It comes down to seeing a point in the sky, we can’t be sure how far away it is, so there are a multitude of different orbit geometries possible,” adds Clemens. “Hence the initial risk corridor across Earth can be quite wide and long. Follow-up observations allow us to discard a lot of these orbits, constraining the risk corridor down towards a point.”

On the terrestrial side, ARMOR benefits from a multitude of Cold War era research on the effects of nuclear weapons, in the same energy regime as asteroid impacts. Thermal radiation, pressure waves and tornado-like winds could extend far from the impact zone.

Key variables include the incoming body’s speed – asteroids from further away in the Solar System possess much higher relative speeds – as well as its mass and density, and impact point: rocky or sedimentary ground, or else the ocean. Impact-generated tsunamis threaten to be especially devastating. A Purdue University website lets users generate their own impact scenarios: https://www.purdue.edu/impactearth/

“The consensus is we’ve only identified 1% of total NEOs,” says Clemens. “The good news is that 90% of all NEOs bigger than 1 km across, classed as civilisation killers, have been found. Smaller asteroids are a greater challenge to detect because they reflect less light. The Chelyabinsk airburst in 2013 was down to a 17 m asteroid, for instance.

“So it will take more observation time on new telescopes to find them, and ARMOR can help to determine the asteroid size regime that these telescopes should focus on to efficiently drive down the risk of smaller impactors.”

ARMOR was demonstrated to the asteroid community at the 2015 Planetary Defense Conference, and has also been shown to the UN Space Mission Advisory and Planning Group, considering international responses to asteroid impact threats.

“Validating the system is a challenge due to the historical scarcity of well documented larger impact events” concludes Clemens. “But we have run Chelyabinsk and Tunguska through ARMOR and the results agreed well with what we see. The prospective results from AIM and the international AIDA mission will be crucial to the planetary defence community in general and to constraining our models of asteroid structure and impact behaviour specifically – by deflecting an asteroid’s orbit for real.”

Clemens is a member of the EU’s Stardust network, supporting research on the topics of asteroid and space debris.