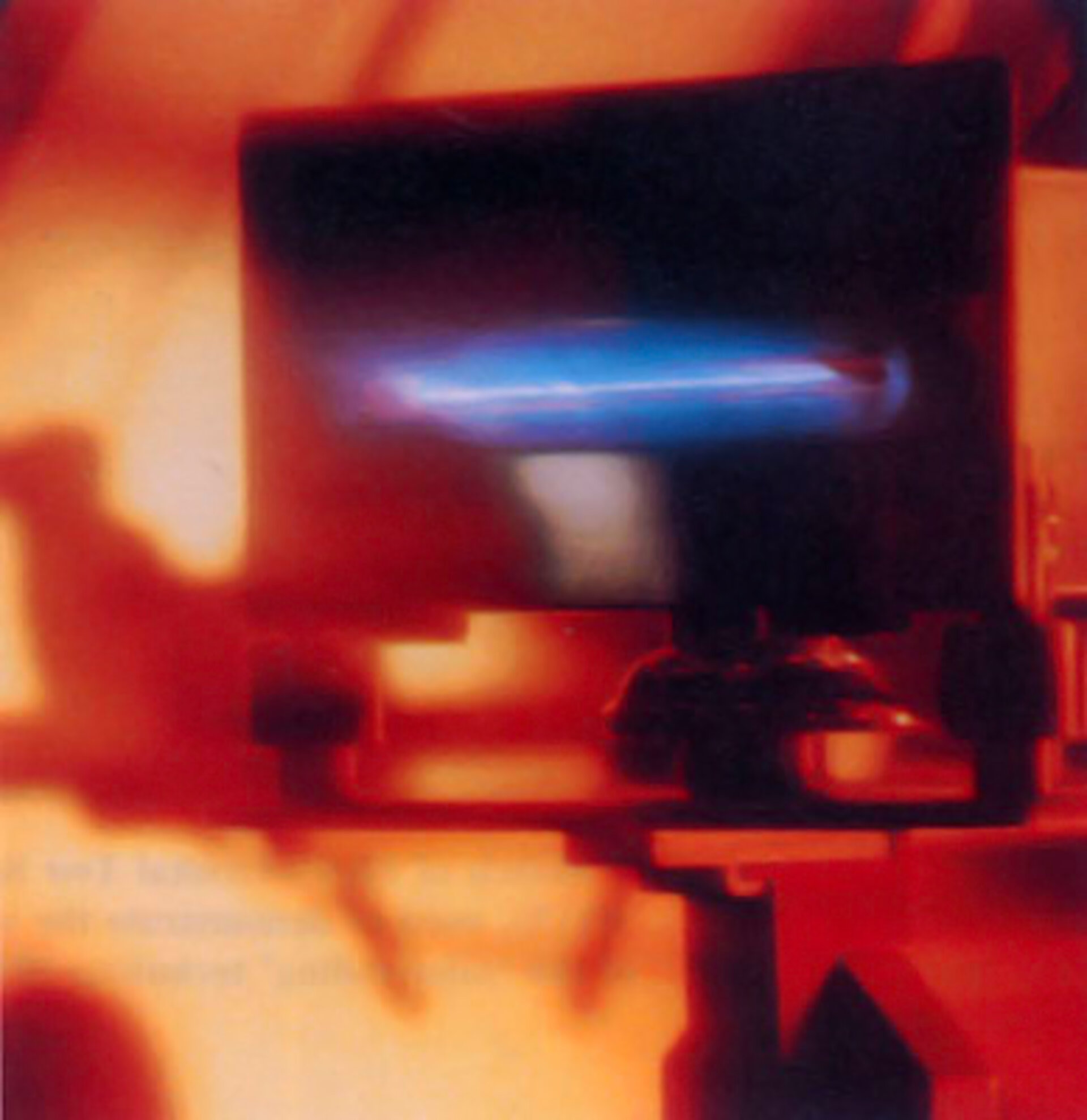 This month an ESA team is preparing to test the performance of the smallest yet most precisely controllable engine ever built for space, sensitive enough to counteract the force of incoming sunshine.

Measuring only ten centimetres across and emitting a faint blue glow as it runs, the Field Emission Electric Propulsion (FEEP) engine produces an average thrust equivalent to the force of a single falling hair. But despite its low power, FEEP's thrust range and controllability are far superior to more forceful thrusters, holding the key to future success of an ambitious ESA science mission.

"Most propulsion systems are employed to get a vehicle from A to B," explains Davide Nicolini of ESA's Scientific Projects Department, in charge of the FEEP project. "But with FEEP the aim is to maintain a spacecraft in a fixed position, compensating for even the tiniest forces perturbing it to an accuracy that no other engine design can match."

Observing how objects behave when separated from all outside influences is a long-time ambition of physicists, but it is impossible to achieve within Earth's gravity field. So a next-decade mission called LISA Pathfinder will fly 1.5 million km to an area in space called Lagrange Point 1 (L1), where the Sun and Earth's gravities cancel each other out, so that the behaviour of a pair of free-floating test masses can be precisely monitored. However, to detach the experiment fully from the rest of the Universe there will still be some remaining perturbations to overcome, most notably the slight but continuous pressure of sunlight itself.

Which is where FEEP comes in. It operates on the same basic principle as other ion engines flown aboard ESA's SMART-1 Moon mission and other spacecraft: the application of an electric field serves to accelerate electrically-charged atoms (known as ions), producing thrust.

But while the thrust of other ion engines is measured in millinewtons, FEEP's performance is assessed in terms of micronewtons – a unit one thousand times smaller. The engine has a thrust range of 0.1 - 150 micronewtons, with a resolution capability better than 0.1 micronewtons in a time response of 190 milliseconds or better.

For propellant, FEEP employs the liquid metal caesium. Through capillary action the metal flows between a pair of metal surfaces that end in a razor-sharp slit. It has a gap measuring just one micron across – a hundred times narrower than the thickness of a human hair. Surface tension holds the caesium in place at the mouth of the slit, until an electric field is generated. This causes tiny cones to form in the liquid metal which have positive ions shooting from their tips to create thrust.

A total of three sets of four FEEP thrusters clustered together will be mounted on the hull of LISA (Laser Interferometer Space Antenna) Pathfinder. Operating together with a separate NASA-designed propulsion system, the FEEP thrusters should yield directional control at least two orders of magnitude more accurate than any spacecraft before it, down to a millionth of a millimetre. This month's ESTEC tests are intended to qualify the FEEP development model before the construction of the final flight hardware begins.

We are overseeing the work here because we have previous knowledge of FEEP technology...

"We are overseeing the work here because we have previous knowledge of FEEP technology," says Pierre-Etienne Frigot of ESA's Propulsion Laboratory. "The subsystem needs to be completely electrically isolated from the rest of the ESTEC vacuum facility and Earth itself, which is not an unusual requirement in electric propulsion testing, but much more challenging because the subsystem operates on a very small micro-ampere electric current."

The trial is taking place within a vacuum chamber with the propulsion system running on batteries, helping to ensure this total electrical decoupling, with the hardware placed above ceramic isolators to prevent any electrical interference from the ground – working in a similar manner to the ceramic supports used to isolate live rails on subway lines.

"We will be seeing how three different micro-propulsion system components work together, the slit FEEP thruster but also its power control unit and thermionic neutraliser. The FEEP firing builds up a strong electrical charging, in the order of thousands of volts, which require charge balancing with equal amounts of electrons to reduce the spacecraft potential to some tens of volts. If the neutraliser does not operate properly in balance with the FEEP that would be dangerous for the spacecraft," adds Frigot.

If LISA Pathfinder were to accumulate a strong electrical potential, that would threaten an electro-static discharge – a kind of lightning in space that could fry crucial onboard systems – so the test rig's resulting 'floating potential' will be carefully measured.

Nicolini says that ESA testing of the FEEP cluster assembly subsystem – developed over the last seven years under ESA contract by Italian companies Alta and Galileo Avionica and Astrium-Toulouse in France and Oerlikon in Switzerland – represents a kind of coming home for the technology: "FEEP was invented at ESTEC but the technology was put aside for a time due to its low power output, until interest in it revived for space applications that require very stable positioning. FEEP remains the sole space propulsion system entirely conceived and developed in Europe."

FEEP in the future

FEEP will operate aboard LISA Pathfinder in conjunction with an almost-as-accurate NASA 'colloidal' thruster system. The intention is to qualify both systems as well as numerous critical technologies required for the joint NASA-ESA LISA, currently scheduled for the end of the next decade.

LISA involves a trio of satellites up to five million km apart and linked by lasers, orbiting the Sun at a distance of 50 million km from the Earth. They will form the single largest structure ever placed in space. The intention is to detect ripples in space-time known as gravitational waves, predicted by Einstein's theory of general relativity but so far undetected from Earth.

FEEP has also been developed to be compatible with the requirements of a French space mission called Microscope, aimed at studying the equivalence principle – best known by Galileo's famous experiment when he dropped a feather and a cannonball from the Leaning Tower of Pisa - to a precision 100 times more accurate than ever before.

Once it has been proven, the FEEP technology has been earmarked for a broad range of other missions, including precision formation flying for astronomy, Earth observation and drag-free satellites for mapping variations in Earth's gravity.