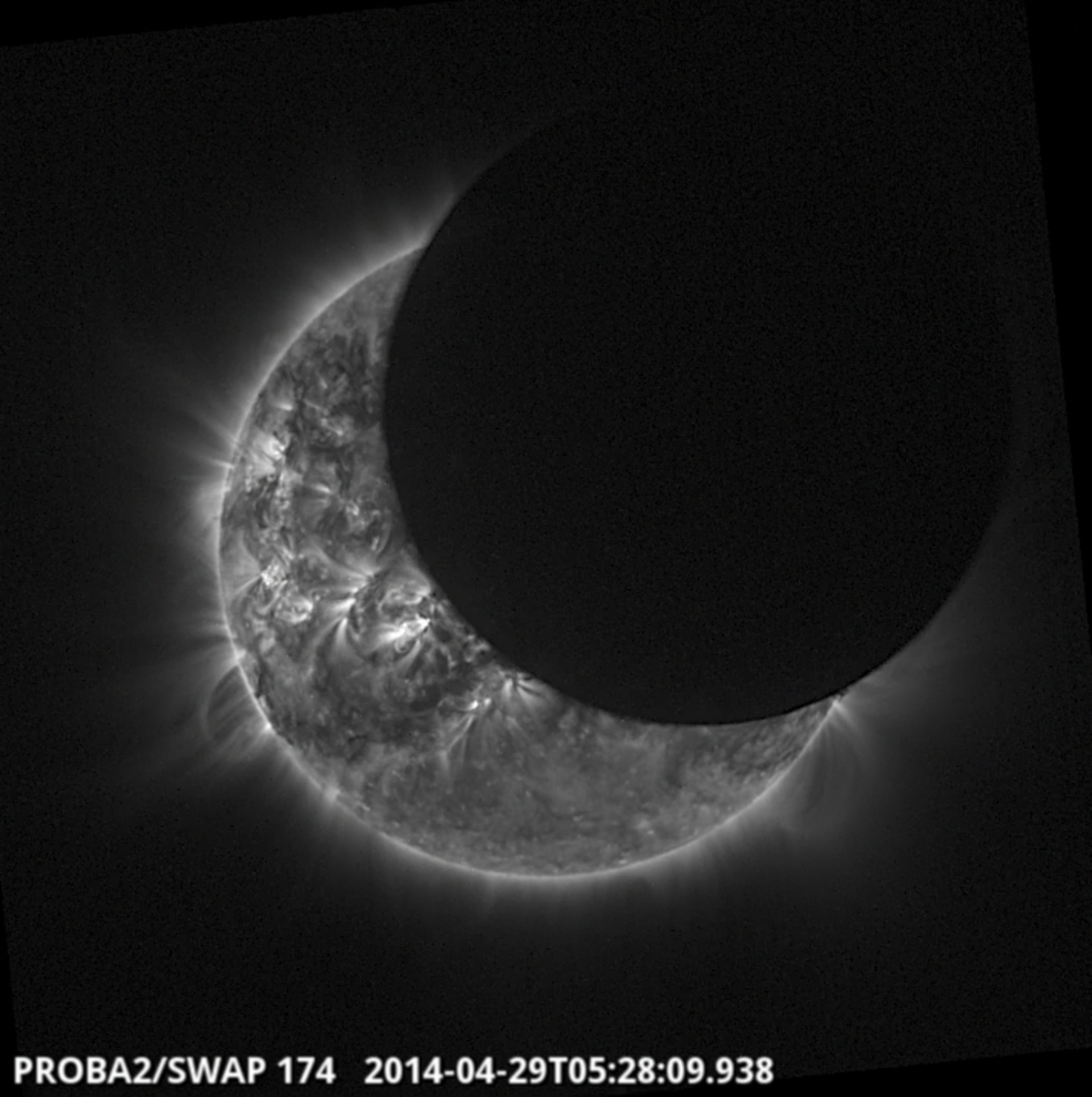 Meanwhile, other members of ESA’s Proba minisatellite family – each smaller than a cubic metre – will be looking downwards, attempting to capture views of the Moon’s shadow as it crosses Earth.

The media and general public are invited to ESA’s technical heart in the Netherlands on the day to experience this spectacular event from both Earth and space. An event is being organised by ESA’s centre and its Space Expo visitor centre in Noordwijk to observe the eclipse safely with telescopes and share views of the Sun, Moon and Earth from orbit.

As observed from Space Expo, the partial solar eclipse will begin at 0930 CET on Friday 20 March, when the edge of the Moon first intrudes into the solar disc, with the maximum four-fifths of the Sun being covered by 10:37 CET and the eclipse concluding at 11:48 CET.

During a solar eclipse the Moon moves in front of the Sun as seen from Earth. As their apparent size is similar, the Moon temporarily blocks a significant part of the Sun’s light.

The whole of Europe will experience a partial solar eclipse this time: 100% of the Sun’s disc will be obscured over Norway’s Svalbard islands, 97% from the north of Scotland, 84% over London, 81% over The Hague, 75% over Paris, 65% over Madrid and 56% over Rome.

The path of ‘totality’ next Friday – where the Sun is completely blocked – will trace a small band across the North Atlantic, including the Faroe Islands and Svalbard, the latter home to an ESA ground station from where eclipse images will be broadcast.

During totality the Sun appears to have a wispy white halo, offering ground observers a rare direct view of its atmosphere or ‘corona’, normally kept out of sight by the intense brightness of the solar disc.

Please take care if you are fortunate enough to be watching this event: observing the Sun with the naked eye is extremely dangerous and can lead to permanent blindness. Please use certified equipment such as solar eclipse glasses, or a solar telescope under expert guidance.

To register to attend the Space Expo event, contact Hans.van.der.Lande@space-expo.nl

ESA’s Proba missions are among the smallest satellites ever flown by ESA, technology demonstrators with important science goals.

Proba-2, launched in 2009, monitors the Sun and space weather. One instrument images the high-temperature surface of the Sun and its surrounding corona at extreme ultraviolet wavelengths, while another tracks overall solar radiation levels.

Proba-2 imagery of the eclipse will be compared with views from other space missions, such as NASA’s Solar Dynamics Observatory, as well as ground observations.

At the same time, Proba-1, launched in 2001, will use its high-resolution multispectral imager to capture the shadow of the Moon beneath its orbital path.

Proba-V, launched in 2013, will do the same with its wide-swath Vegetation camera, trying to capture the zone of totality within its field of view.

Next Friday’s Space Expo event will include a briefing on ESA’s coming Proba-3. Due for launch in late 2018, Proba-3 will create an artificial total solar eclipse in space, allowing sustained study of inner sections of the Sun’s corona.

A pair of satellites will be flown in formation to millimetre-scale precision, in order for one satellite to cast a shadow across the other, blocking out the Sun.