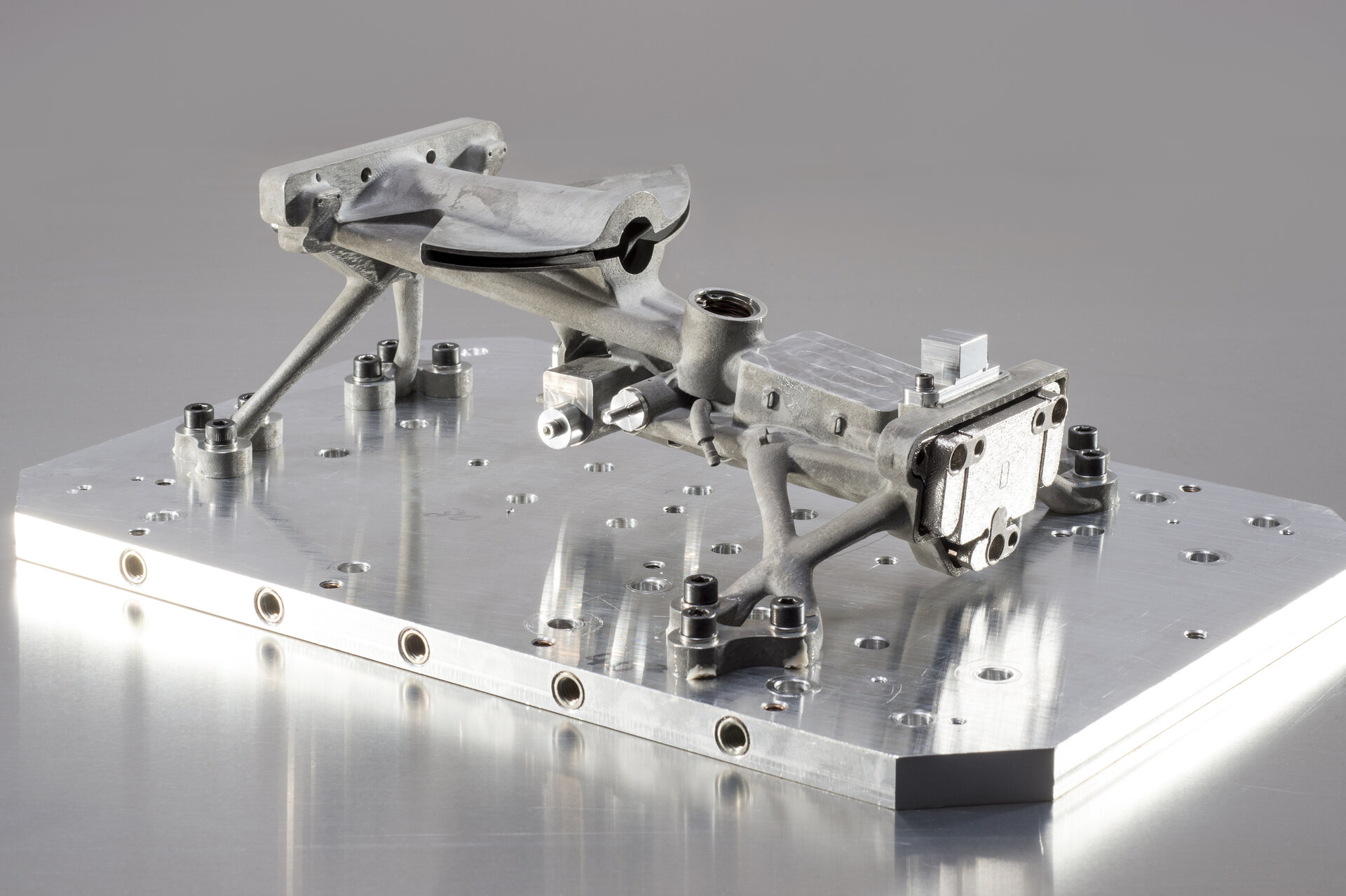 This weirdly organic item is the answer to an engineering question: how to take the maximum benefit from 3D printing to produce a highly demanding item for a space mission? An ESA-led team began with a Dutch-designed space telescope which identifies ozone and other trace gases in Earth’s atmosphere, then comprehensively redesigned it for manufacture in this innovative way.

The result is made out of three main parts, with nine parts altogether including the telescope’s two mirrors, printed in flight-grade aluminium alloy. Compared to the 2.8 kg original version, the telescope of the Ozone Monitoring Instrument, OMI, flown aboard NASA’s EOS-Aura mission, this version is 0.76 kg, some 73% lighter, with no reduction in measurement quality.

“This is a high performing instrument – the predecessor of the Tropomi instrument aboard Sentinel-5P – that needs to be extremely precisely aligned optically in order to do its work, identifying spectral fingerprints of trace gases in the atmosphere,” explains ESA materials engineer Laurent Pambaguian. Such optomechanical structures ask a lot of the material, the production process and the design team.

“One of the advantages of 3D printing, otherwise known as additive manufacturing, is that this version of the instrument performs its tasks using very few parts,” says Floris van Kempen of Dutch research institute TNO, which built the original OMI instrument (as well as Tropomi).

“This was made possible, because those parts can be built with an unprecedented complex geometry, allowing us to unite functionality within them. This saves precious mass, and effort for the design, assembly and testing of the system. At the same time it enables all the necessary tasks of a robust top-quality optical instrument.”

The printing process also meant that the telescope’s intricate internal structure could be made at once, including the multiple baffles used to reduce unwanted internal ‘stray light’ and everything securing the two mirrors in place.

“The overall purpose of this activity has been to focus on the procurement chain needed to produce a complex functional item such as this telescope using additive manufacturing,’ says Laurent.

“We wanted to understand how all the partners would need to be involved, information transferred between them, and the kinds of additional service providers needed to be bought in, on an end-to-end basis.”

The telescope’s organic look comes from an computational design approach called topology optimisation that places material just where the loads are, akin to the way a tree grows branches. Laurent adds: “This led to some surprises, for instance while the original design had six legs for six attachment points, we ended up with six legs for just four attachment points, which turned out to work very well.”

“Although this was our first attempt to use additive manufacturing technology for a complex opto-mechanical use case, the team could clearly demonstrate the benefits of the technology by developing and manufacturing a demanding, high-precision telescope assembly,” states OHB’s project manager Markus Thiel.

“Even after a complete environmental test program including thermal vacuum, sine and random vibration and shock testing, the Additive Manufactured Demonstrator Telescope was fully compliant with the relevant optical performance requirements.

“Our main lesson learned as a Large System Integrator is that a reliable and fully traceable end-to-end process chain from design and development via manufacturing, post-processing, assembly and integration to verification and final inspection is the key to introduce complex additive manufacturing-made parts into future optical payloads.”

Sebastian Klein of IABG says: “The exciting aspect of the project for us was that our competences and test facilities have supported the entire development cycle, starting with analyzing the material properties of the chosen print material.

“We progressed to breadboard vibration testing, our results feeding back to refine the final design model. We then to subjecting the final item to vibration and pyroshocks – to ensure it met the demanding requirements involved.”

Structural parts such as launcher or satellite struts are already routinely 3D printed for space missions, but the idea of this project was to manufacture a much more demanding item.

Laurent adds: “This takes us much nearer to where additive manufacturing could be used for challenging flight hardware in future. The cost is low enough that potentially project managers could develop a part in parallel with a traditional item, then reach a decision point about which version to embark.”

3D printing R&D undertaken as part of ESA’s Advanced Manufacturing initiative aims to enable the technique for more widely use across the space sector.

ESA is currently finishing the European Cooperation on Space Standardization standard for 3D printing for space – essentially a guide to best practice for all European space activity. Following a public review process, the standard is scheduled for release next year.