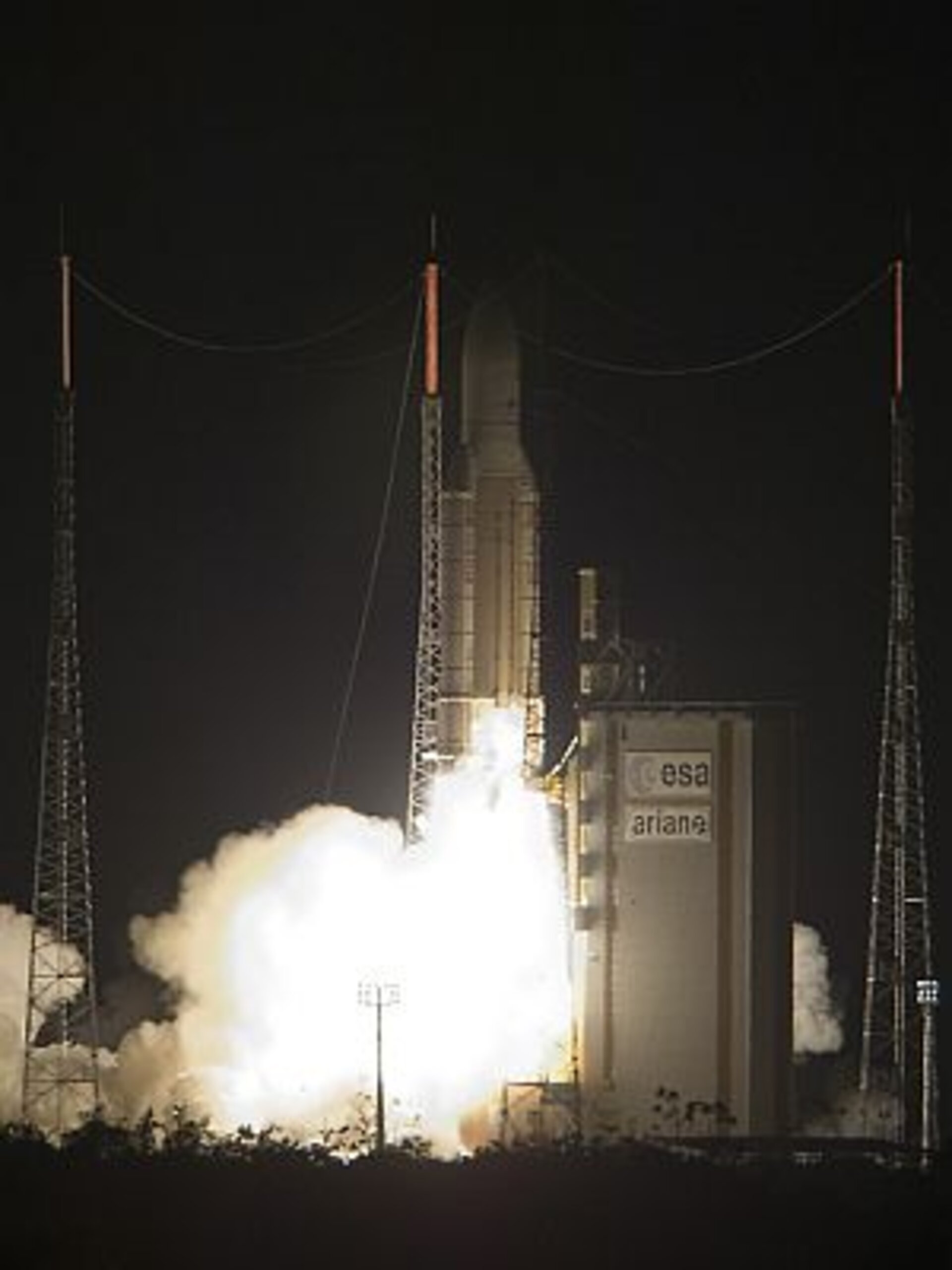 A successful re-ignition of the Ariane 5 upper stage engine performed during the most recent mission has consolidated Ariane 5's readiness for the launch of the Jules Verne Automated Transfer Vehicle.

The launch of ESA's Automated Transfer Vehicle (ATV), which carries supplies to the International Space Station, will require multiple firings of the Ariane 5 ES upper stage engine. In this context, hundreds of re-ignition tests under various thermal conditions have been undertaken at the DLR Test Centre in Lampoldshausen to qualify the Aestus engine for several re-ignitions.

In order to consolidate this on ground qualification a re-ignition experiment was performed during the last Ariane-5 launch - on the evening of 5 October - when an Ariane 5 GS launcher lifted off from Europe's Spaceport in French Guiana carrying two commercial telecommunications satellites into geostationary transfer orbit.

Once the commercial payloads were safely on their way, a successful experimental re-ignition of the Aestus engine took place - 54 minutes after the release of the second payload. The experiment was done to validate operational conditions (mainly temperatures and pressures) and procedures (propellant settling in tanks) of the launcher upper stage, which will be applied during the ATV orbital injection mission. It also verified the behaviour of the composite during the re-ignition phase.

Analysis of the many temperature and pressure parameters is ongoing and confirms a nominal behaviour very close to expectations. “We are extremely satisfied with the results of the Aestus re-ignition experiment, which confirms the on ground qualification of the re-ignition capability and adds to our confidence of mission success for the launch of ATV Jules Verne in the early part of next year” said ESA's Ariane Programme Manager, Toni Tolker-Nielsen.

Launching the ATV will be more complex because the target orbit is circular, rather than elliptical.

After main stage separation over the Atlantic Ocean, the Aestus engine of the upper stage will perform a first boost lasting 8 minutes to reach an elliptical orbit (136 km x 260 km). Then, after a coasting phase to the apogee of the elliptical orbit lasting 48 minutes, a second boost with a duration of 30 seconds serves to reach the ATV circular injection orbit at an altitude of 260 km.

This second firing of the Aestus engine will take place over southeast Australia, just over an hour into the flight. Four minutes later, the ATV will separate over the Pacific, ready to fly to the International Space Station using its own navigation and propulsion systems.

One orbit later, now over Western Australia, the Aestus engine will re-ignite briefly, for a third time, causing the launcher's upper stage to de-orbit safely and burn up during a precise destructive re-entry over of the South Pacific Ocean.