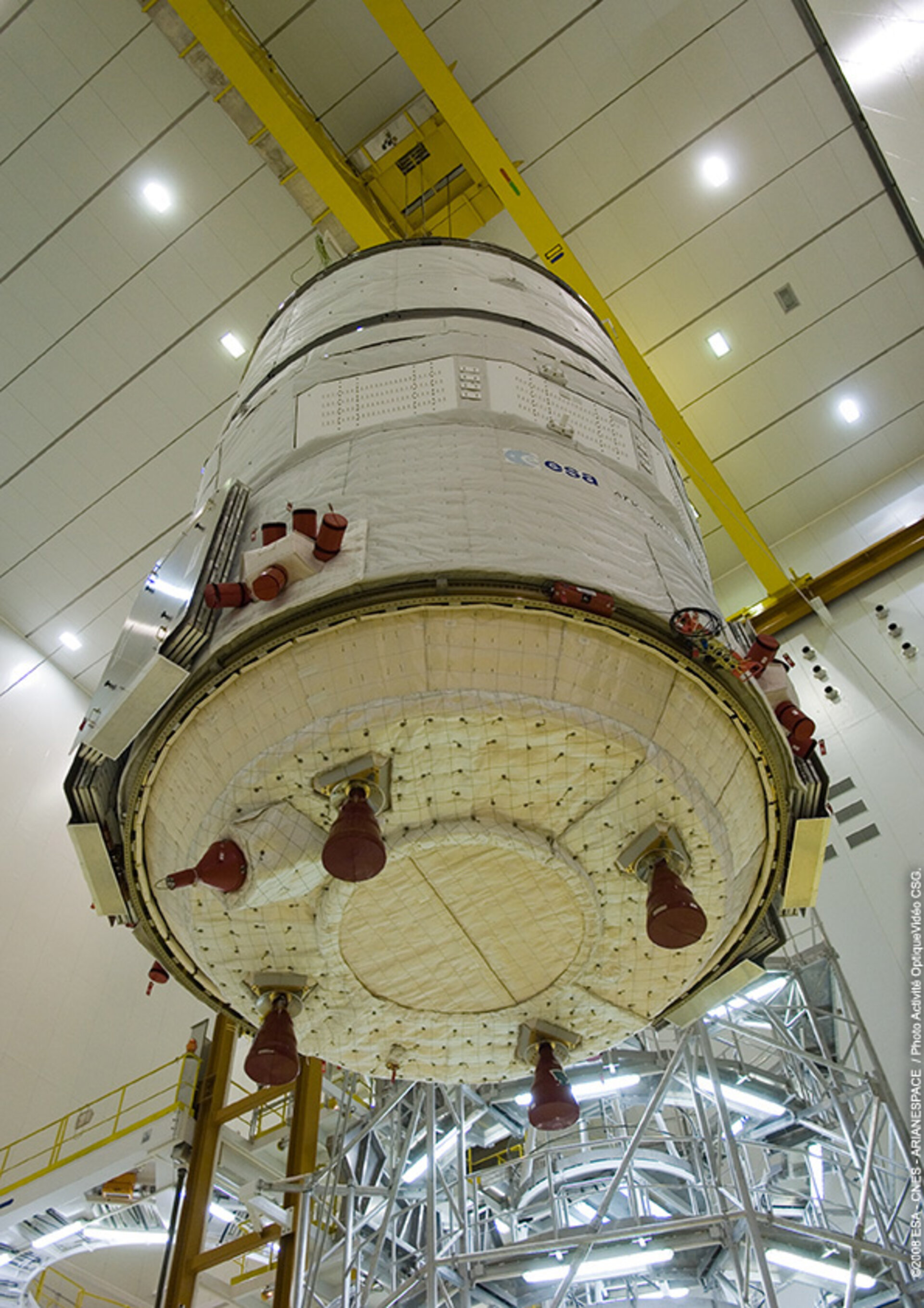 The ATV Service Module, which was not pressurised, included the spacecraft's propulsion systems, electrical power, computers, communications and most of the avionics. The avionics bay, a cylindrical ring 1.36 m high, was located in the upper part of the Service Module.

ATV's propulsion system provided the spaceship with the orbit transfer capability and reboost support for the International Space Station.

For launch, the ATV Service Module was mounted on the Ariane 5 launcher using a cylindrical adapter which had a locking and separation system that was jettisoned 70 minutes after liftoff.

The silicon-based solar cells – spread on four carbon-fibre reinforced plastic sandwich panels per array with a total surface of 33.6 m² (4 x 8.4 m²) — were able to produce an average of 4800 Watts.

Mounted on the ATV Service Module, the four Sun-tracking arrays were totally independent and could get the best orientation to the Sun thanks to rotating mechanisms.

The ATV Service Module also accommodated several rechargeable and non-rechargeable batteries and some redundant items like a Sun sensor and a Russian-made KURS antenna.

The avionics bay was the brain of the ATV and accommodated critical items such as computers, gyroscopes, navigation and control systems and communications equipment. All these items were mounted on ten equipment carrier trays which were protected from temperature variations by state-of-the-art variable conductance heat pipes.

The ATV Service Module took advantage of a very sophisticated architecture for its hardware and software that comprised the overall avionics set up. For example, lots of hardware chains and avionics lanes were built independently, in order to keep ATV functioning in case of hardware failure or main malfunction.

All the propellant tanks for spaceship propulsion were located in the ATV Service Module, between the main engines and the avionics bay. There were eight titanium propellant tanks and two high-pressure helium tanks. The tanks held up to seven tonnes of liquid propellants (MMH – Monomethylhydrazine, and N2O4 - nitrogen tetroxide), part of this was used for the Station attitude and orbit control. The propellants were pressurised by helium stored in two carbon-fibre tanks.

After docking, ATV could perform Space Station attitude control, debris avoidance manoeuvres and raise the orbit of the more than 200-tonne Station to overcome the effects of atmospheric drag. In order to perform this reboost ATVs used up to 4 tonnes of their own propellant at intervals of 10 to 45 days. In raising the Station's orbital altitude, ATV resembles a tugboat, pushing the whole orbital outpost.

With its own flight control and propulsion systems, ATV had a high level of autonomy allowing it to stay in free-flight for long periods of time, as well as to dock even if the Station was totally dormant and uninhabited.

Once its resupply mission was finished, ATV was filled with waste and undocked automatically. The Service Module thrusters used their remaining fuel to deorbit the spacecraft, sending the craft on a steep flight path to perform a controlled destructive reentry high above the Pacific Ocean.