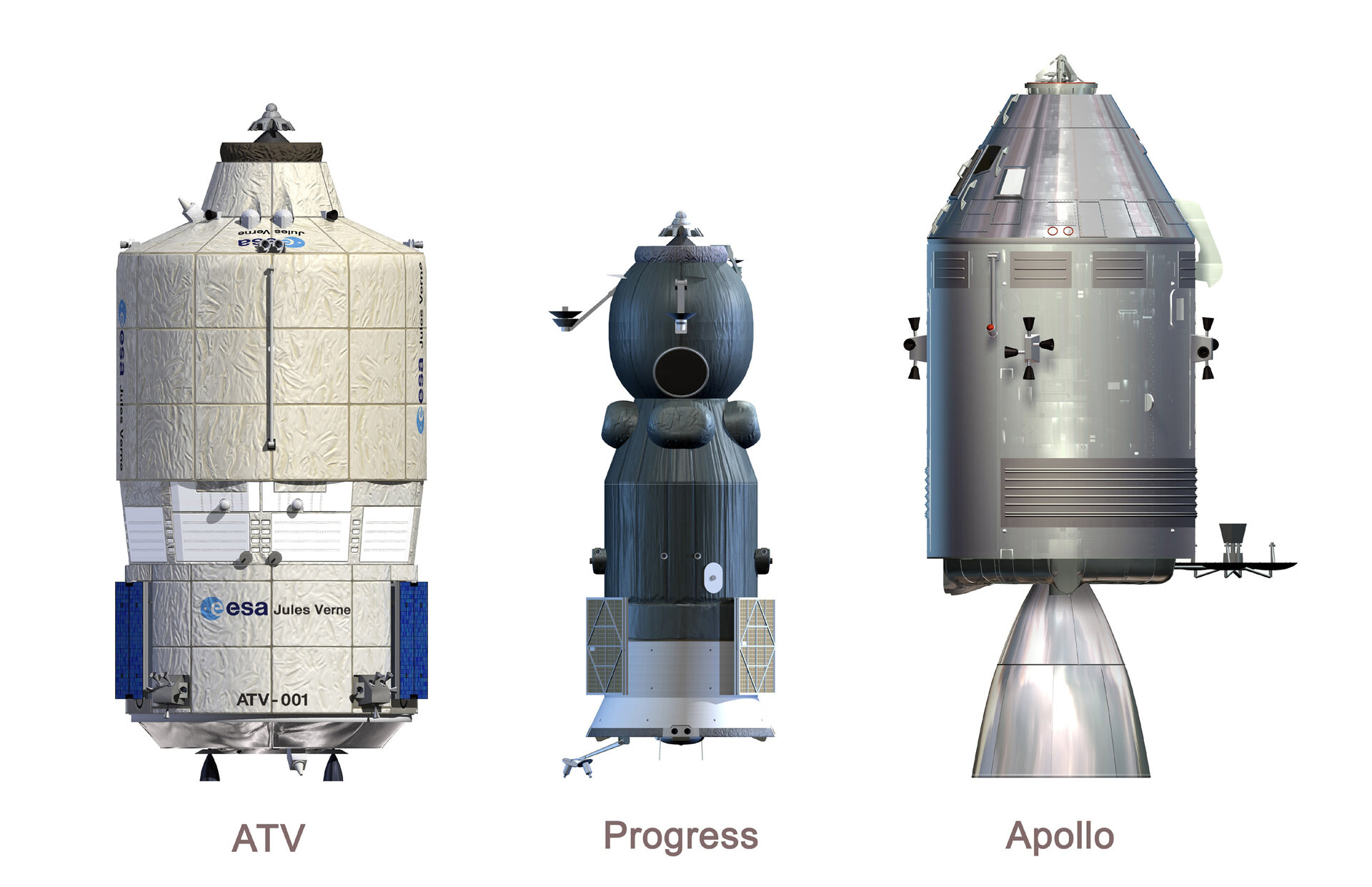 Last year, when NASA Administrator Sean O'Keefe visited the bus-sized cylindrical ATV spacecraft model during crucial tests at ESA's test facilities in Noordwijk, the Netherlands, one of his main questions was to know how big the European cargo ship was compared to the Apollo spaceship used to reach the Moon in the 1960s and 70s.

If time had not separated them by 35 years or so, the ATV (10m by 4.5m in diameter) and Apollo (11m by 3.9m in diameter) spacecraft would be comparable by their impressive size and mass. The Apollo spacecraft as a whole, with its Service Module, has a greater mass at launch - 30 tonnes versus 21 tonnes - but its diameter is 0.6m less.

However the main difference is actually in their function. The Apollo spacecraft was developed and flown in the mid-sixties to bring a three-member crew to explore the Moon. The ATV, which will fly approximately 35 years later, has been designed and built to be used as a cargo re-supply ship, able to carry 7.5 tonnes of dry cargo and fluids to the International Space Station (ISS).

The ATV has to fulfill the demanding requirements of manned spacecraft safety (since it becomes an extension of ISS for up to six months). At the same time it must have enough automatic capabilities requiring no involvement from the astronauts for rendezvous and docking.

Although no human beings will ever be launched in an ATV, astronauts - in shorts and T-shirts - will be able to access its cargo during the six-month stay and remove the payload: supplies, science hardware, parcels of fresh food, mail and family tapes or DVDs. Meanwhile, the ATV's liquid tanks will be connected to the Station's own plumbing and their contents unloaded. According to the needs on board the Station, the ATV is able to accommodate different combinations of supplies, carrying up to 840 kg of drinking water, 860 kg of refuelling propellant for the Station's own propulsion system, 100 kg of air (oxygen and nitrogen) and up to 5.5 tonnes of dry cargo. At intervals, the ATV will also use its thrusters to boost the Station's altitude.

The ATV has about three times the payload capability of its Russian counterpart, the Progress-M cargo vehicle. The 20.7 tonne ATV will be launched on board an Ariane-5 rocket from Europe's spaceport in Kourou, French Guiana. The Apollo capsule, which was flown nine times in orbit around the Moon between 1968 and 1972, was launched with a Saturn 5 rocket from Cape Canaveral, in the United States. The Progress spacecraft, as well as its manned version, the Soyuz capsule, are launched by rocket from Baikonur Cosmodrome, in Kazakhstan. Both the Apollo and Soyuz spacecraft have re-entry capabilities with their respective capsules, but the ATV and Progress spacecraft fully burn up during a guided and controlled re-entry over the Pacific.

Although the concept of a space tug or transfer vehicle for moving astronauts and equipment to different Earth orbits has been envisioned for decades by different space agencies, the European built ATV will be the most powerful space tug ever built. If required in future programmes, the ATV could also evolve to be used as a transfer vehicle carrying tonnes of supplies to the Moon orbit and beyond.