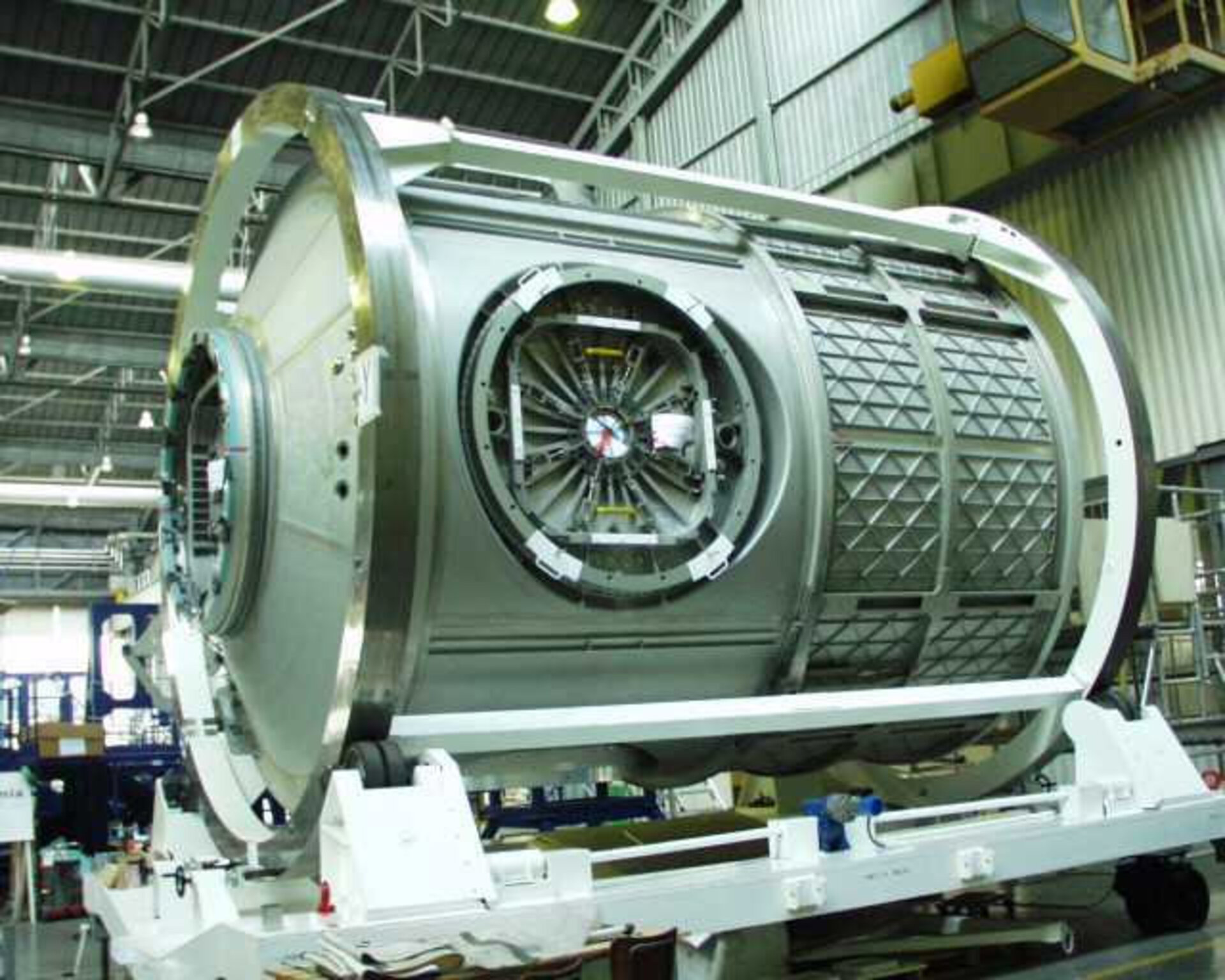 Six years of hard work came to fruition when ESA formally transferred ownership of Node 2 to NASA on 18 June 2003. This took place in the Space Station Processing Facility of the Kennedy Space Center in Florida.

The ceremony was attended by Alan Thirkettle, Head of the Development-Department of ESA’s Human Spaceflight Directorate, representatives from the Italian Space Agency (ASI), the Japanese Space Agency (NASDA), NASA, and selected media organisations.

Nodes are modules, which interconnect the assembly elements of the ISS. Node 2, in particular will connect four ISS laboratories, namely the Centrifuge Accommodation Model, the Japanese Experiment Module (Kibo), the US Laboratory Destiny and ESA’s Columbus laboratory. It will also act as a working base point for the Canadian robotic arm Canadarm 2 and provide separate docking ports for the US space shuttle and the European-built Multi-Purpose Logistics Module (MPLM), for the purposes of ISS assembly and provision of research equipment and supplies. The MPLM is a pressurised cargo container, which travels in the shuttle cargo bay.

The handover of Node 2 completes a major element of the barter agreement between ESA and NASA signed in Turin on 8 October 1997. Under this agreement, ESA will provide Node 2 and Node 3 (a similar node under construction) plus additional equipment and know-how in return for transportation of the European Columbus Laboratory to the ISS by the Space Shuttle, currently scheduled for launch in October 2004. Node 2 is also scheduled to be launched in 2004 and will be the second Node to form part of the ISS. Node 1 was launched to the ISS in 1998 and was constructed under a NASA contract.

At the official hand over ceremony from ESA to NASA, ESA representative Alan Thirkettle delivered a speech, which focussed on the continued commitment of ESA to the ISS programme and the strong cooperation that exists between all partners of the ISS.

In his speech he said: “The European Space Agency sees this module as an element, which provides an example of how far the ISS partner countries have progressed, not only with scientific development, but also with international relations, since this module will be connecting the European Laboratory Columbus with the American Laboratory Destiny and the Japanese laboratory Kibo. ESA is proud to be the organisation, which has developed the element, which will join these three space powers together.”

Further highlighting this sense of close international relations was the presence of the Japanese Space Agency delegate who was at the ceremony to mark the arrival of the Japanese Kibo Laboratory at KSC, where it will undergo completion of its interface qualification programme prior to delivery to the ISS in 2006.

Mr Thirkettle went on to express his gratitude to all present delegates and furthermore to the employees of Alenia Spazio in Turin. Alenia Spazio is the prime contractor in the consortium of European companies, which constructed Node 2, (and are constructing Node 3). This construction was carried out under ESA responsibility and in the frame of an agreement delegating to the Italian Space Agency (ASI) the technical and programmatic management of the project.

He ended his speech by saying: “…by handing over this Node 2 module on behalf of the European Space Agency today, we move one step closer to our final goal: a complete International Space Station. The finest example of accomplishment through cooperation and the greatest symbol of the future of humans in space.”

Handing the completed Node 2 module to NASA heralds the beginning of a significant period in the European contribution to ISS assembly and supply, which will see the completion of the European Columbus Laboratory and the launch of the European Automated Transfer vehicle before the end of next year.