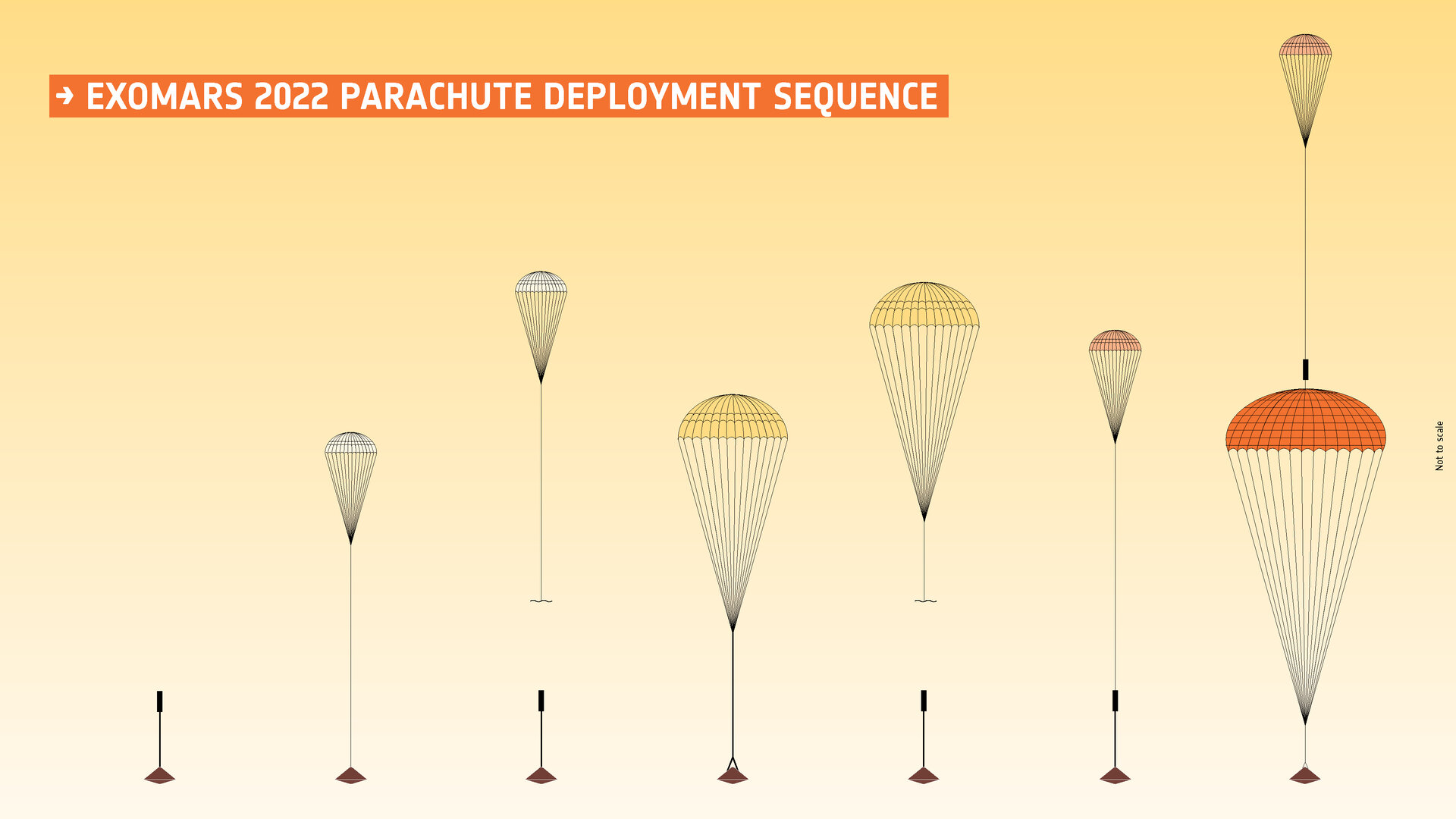 Positive steps towards solving the problems discovered with the ExoMars mission parachutes have been taken in the last month to keep on track for the July-August 2020 launch window.

The mission needs two parachutes – each with its own pilot chute for extraction – to help slow the descent module prior to landing on Mars. Once the atmospheric drag has slowed the descent module from around 21 000 km/h to 1700 km/h, the first parachute will be deployed. Some 20 seconds later, at about 400 km/h, the second parachute will open. Following separation of the parachutes about 1 km above ground the braking engines will kick in to safely deliver a landing platform – with a rover encapsulated inside – onto the surface of Mars for its scientific mission. The entire sequence from atmospheric entry to landing takes just six minutes. 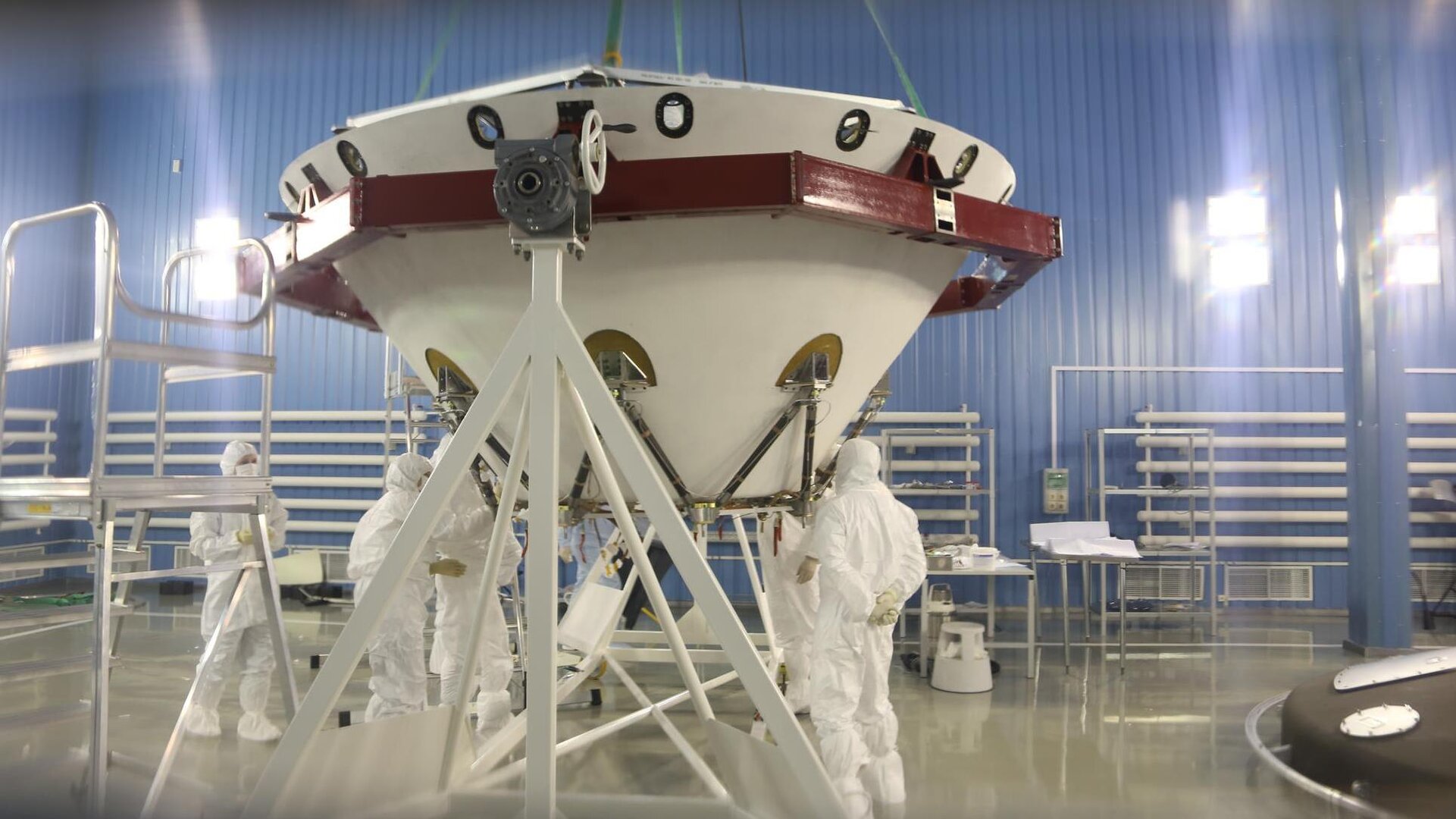 While the deployment sequence of all four parachutes was successfully tested in high altitude drop tests earlier this year, damage to the 15 m-diameter primary parachute and 35 m-diameter secondary parachute canopy was observed. Despite precautionary design adaptations being introduced for a second test of the 35 m parachute, canopy damage occurred again.

A thorough inspection of all the recovered hardware has since been completed, allowing the team to define dedicated design adaptations to both primary and secondary main parachutes. Some promising design changes will also be applied to the parachute bags to ease the lines and canopy exit from the bags, avoiding frictional damage.

ESA has also requested support from NASA to benefit from their hands-on parachute experience. This cooperation gives access to special test equipment at NASA’s Jet Propulsion Laboratory that will enable ESA to conduct multiple dynamic extraction tests on the ground in order to validate any foreseen design adaptations prior to the upcoming high altitude drop tests.

The next opportunities for high altitude drop tests are at a range in Oregon, US, January–March. ESA is working to complete the tests of both the 15 m and 35 m parachute prior to the ExoMars project’s ‘qualification acceptance review’, which is planned for the end of April in order to meet the mission launch window (26 July–11 Aug 2020).

The qualified parachute assembly, inside its flight canister, should ideally be integrated into the spacecraft prior to shipment to Baikonur in April, but it is also possible to do so during the spacecraft preparation activities at the launch site in May.

The mission will launch on a Proton rocket, and a carrier module will transport the composite descent module, Kazachok lander platform and Rosalind Franklin rover to Mars, arriving in March 2021. After driving off the surface platform, Rosalind Franklin rover will explore the surface of Mars, seeking out geologically interesting sites to drill below the surface, to determine if life ever existed on our neighbour planet.

The rover is currently undergoing its environmental test campaign at Airbus Toulouse, France. At the same time, the flight carrier module containing the descent module and lander platform is completing its final round of testing at Thales Alenia Space, Cannes, France. The rover will be integrated into the spacecraft in early 2020.

The ExoMars programme is a joint endeavour between ESA and Roscosmos. In addition to the 2020 mission, it also includes the Trace Gas Orbiter (TGO) launched in 2016. The TGO is already both delivering important scientific results of its own and relaying data from NASA’s Curiosity Mars rover and InSight lander. It will also relay the data from the ExoMars 2020 mission once it arrives at Mars in March 2021.