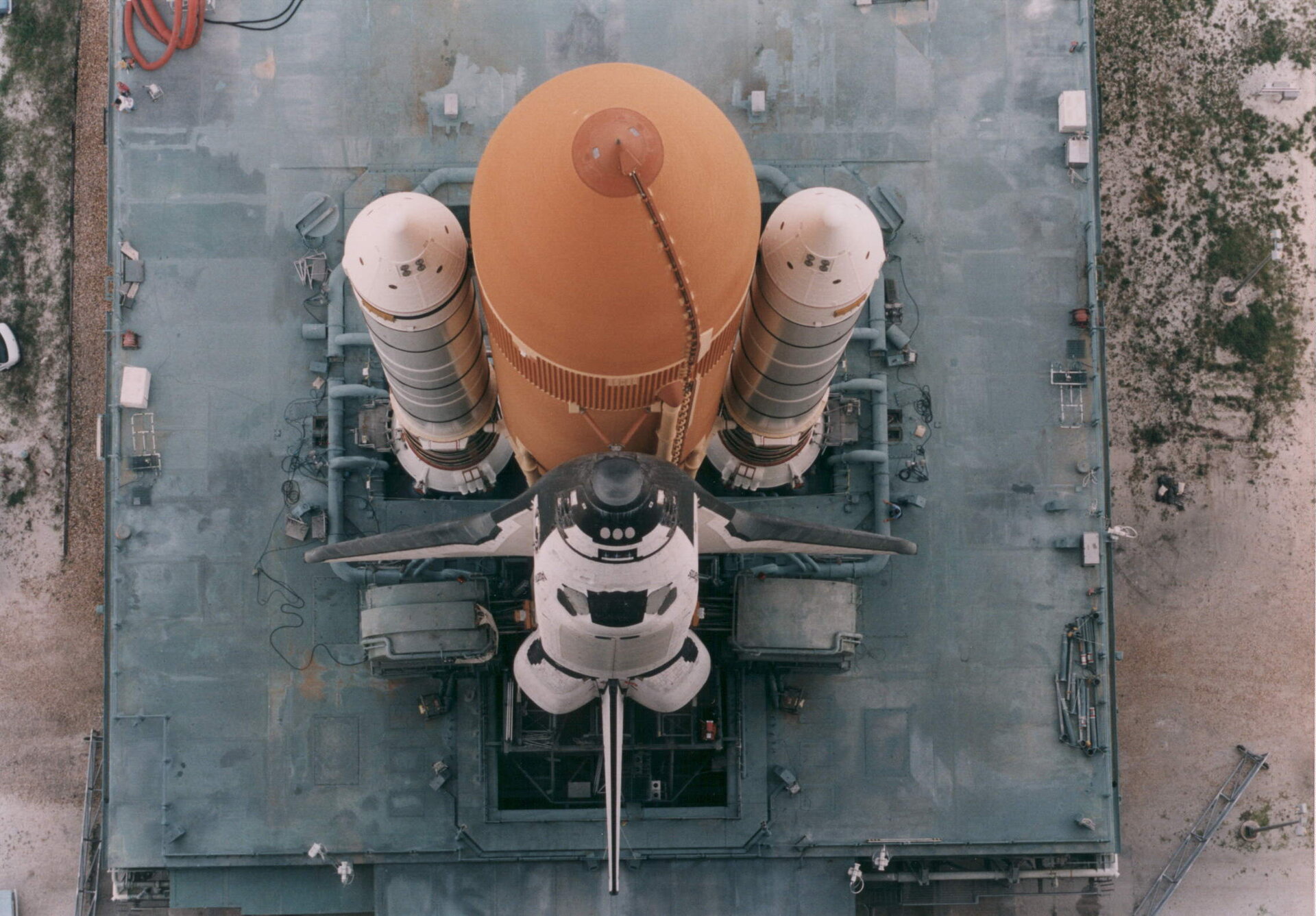 The Space Transportation System (STS) is the formal name of NASA’s Space Shuttle, consisting of an aircraft-like orbiter, two boosters and a huge external tank.

The stack, as the composite of orbiter, tank and boosters is called, has a gross liftoff weight of 2000 tonnes. Its height is 56 m and the boosters with the three Space Shuttle Main Engines generate 30.16 MN of thrust.

Shuttle is able to loft about 24 tonnes of cargo to low orbit and transport typically seven astronauts.

The Orbiter is about the size of an Airbus A320 airliner, but sports the double-delta wings of a fighter. It has a crew compartment in the nose section, followed by a large payload bay and finally three main rocket engines in the aft fuselage.

The Orbiter structure is primarily aluminum alloy, with the engine structure primarily titanium alloy. The whole underbelly is covered by ceramic tiles protecting the Orbiter from the extreme heating of reentry. Each orbital vehicle was designed for 100 flights.

Each Orbiter has three Rocketdyne Block II SSMEs, each with a sea level thrust of 1.752 MN at 104% power. The total thrust of three engines at liftoff is 5.255 MN.

The engines run on liquid oxygen and liquid hydrogen carried in the External Tank. The burn time of the engines is 480 seconds.

The main role of the External Tank is to supply the liquid oxygen and hydrogen propellants to the main engines, but it also holds the attachment points for the two Solid Rocket Boosters and the Orbiter itself. The External Tank is the only non-reusable part of the Space Shuttle system.

Two solid rocket boosters (SRBs) each generate 12.5 MN of thrust at liftoff, totalling up to 83% of the total thrust needed. After two minutes of flight, the boosters are jettisoned at a height of about 45 km. They separate from the Shuttle, deploy parachutes and fall into the Atlantic Ocean for recovery.

The boosters have a very heavy-duty construction with steel cases about 13 mm thick. They are reused many times: as one example, an SRB segment from STS-1 flew six times in the following years plus one ground test.

The propellant mixture in the boosters consists of ammonium perchlorate (oxidiser), aluminum (fuel), iron oxide (a catalyst), a polymer that holds the mixture together and acts as secondary fuel and an epoxy curing agent.