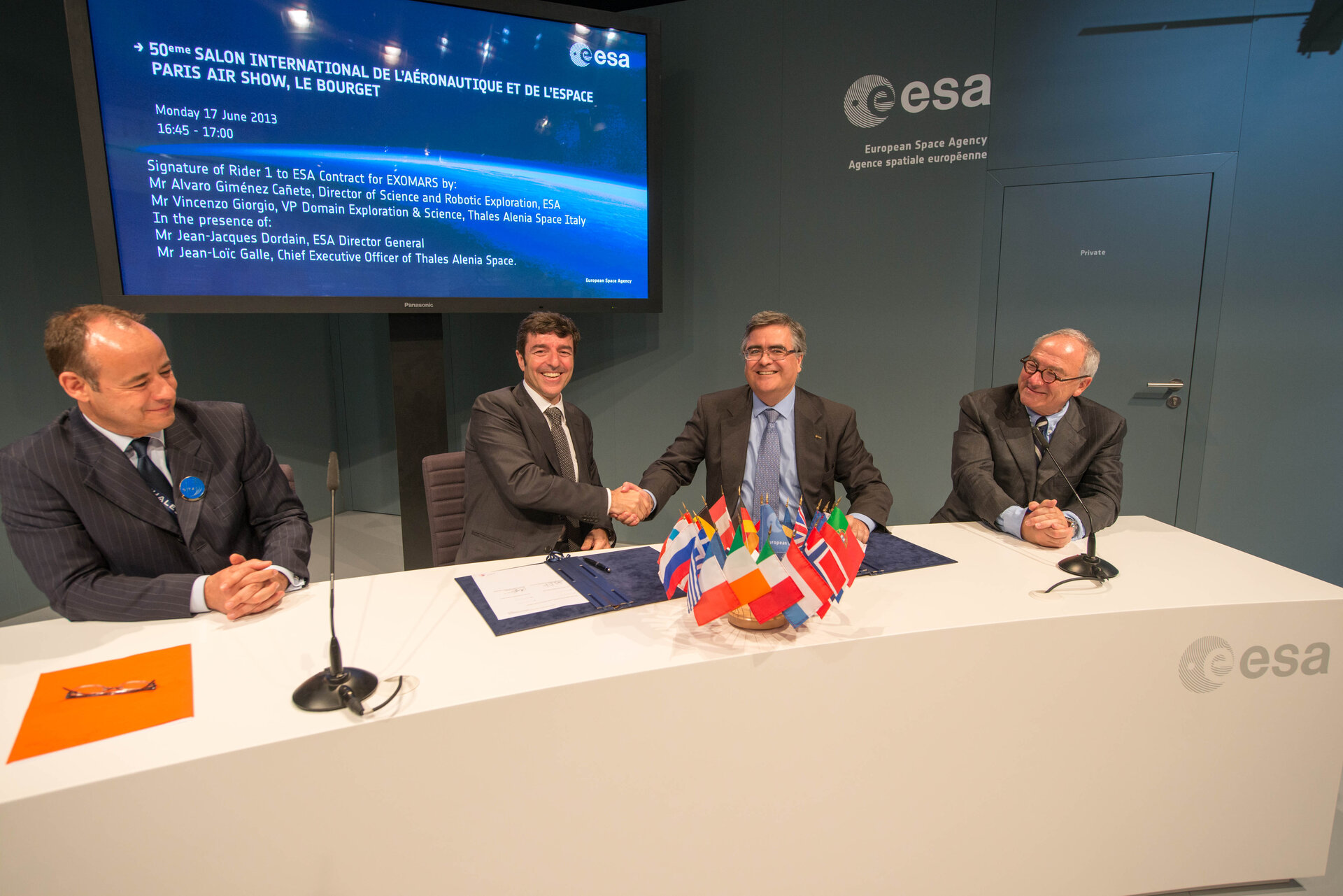 ESA’s mission to Mars in 2016 has entered the final stage of construction with the signature of a contract today with Thales Alenia Space at the Paris Air & Space Show.

ExoMars will fly two missions, in 2016 and 2018, in a partnership between ESA and the Russian space agency, Roscosmos. Its main goal is to answer one of the outstanding scientific questions of our time: has life ever existed on Mars?

In addition, ExoMars will develop new European technical capabilities in landing, roving, drilling and preparing samples to pave the way for a future Mars sample-return mission in the 2020s.

The first mission will be launched in 2016 and will include the Trace Gas Orbiter (TGO) to search for evidence of methane and other atmospheric gases that could be signs of active biological or geological processes.

It will also deliver the Entry, Descent and Landing Demonstrator Module (EDM) to the surface of Mars, to demonstrate key technologies needed for the 2018 mission and future landing missions.

The 2018 mission will land a rover on Mars – the first with the capability of drilling to depths of 2 m to collect samples that have been shielded from the harsh conditions on the surface, where radiation and oxidants can destroy organic materials.

In addition, the 2018 mission carries a Surface Platform with scientific instruments to investigate the martian environment.

The agreement, signed today in the ESA pavilion at the Paris Air & Space Show, marks a major milestone for the mission and for Thales Alenia Space, the industrial prime contractor on ExoMars.

“The award of this contract provides continuity to the work of the industrial team members of Thales Alenia Space on this complex mission, and will ensure that it remains on track for launch in January 2016,” noted Alvaro Giménez, ESA’s Director of Science and Robotic Exploration.

For the 2016 mission, Thales Alenia Space Italy is building the EDM, which is currently completing structural tests at the company’s laboratories in Turin. TGO’s orbiter is being built at Thales Alenia Space’s site in Cannes, France.

The first mission will be launched in January 2016, arriving at Mars nine months later. The second mission is scheduled for launch in May 2018, arriving at the planet in early 2019.

The ExoMars Programme is funded by 14 ESA states (Austria, Belgium, Denmark, France, Germany, Italy, the Netherlands, Norway, Portugal, Spain, Sweden, Switzerland, the UK and Canada) of which Italy is the largest contributor and the UK the second largest. Member States are also providing scientific instruments to ExoMars. For the 2016 TGO, these include the infrared and ultraviolet spectrometer package NOMAD (led by Belgium) and the CaSSIS high-resolution colour stereo camera (led by Switzerland). TGO will also carry two Russian instruments. Italy will lead the DREAMS environmental station on EDM.

The 2018 Rover will comprise PanCam, a wide-angle and high-resolution camera system (led by the UK); CLUPI, a close-up imager (led by Switzerland); WISDOM, a ground-penetrating radar (led by France); Ma_MISS, a miniaturised infrared spectrometer integrated in the drill (led by Italy); MicrOmega, a visible and infrared imaging spectrometer (led by France); RLS, a Raman spectrometer (led by Spain), and MOMA, a novel organic molecule detector (led by Germany, with substantial contributions from the United States). The European payload of the Rover is complemented by two Russian instruments.