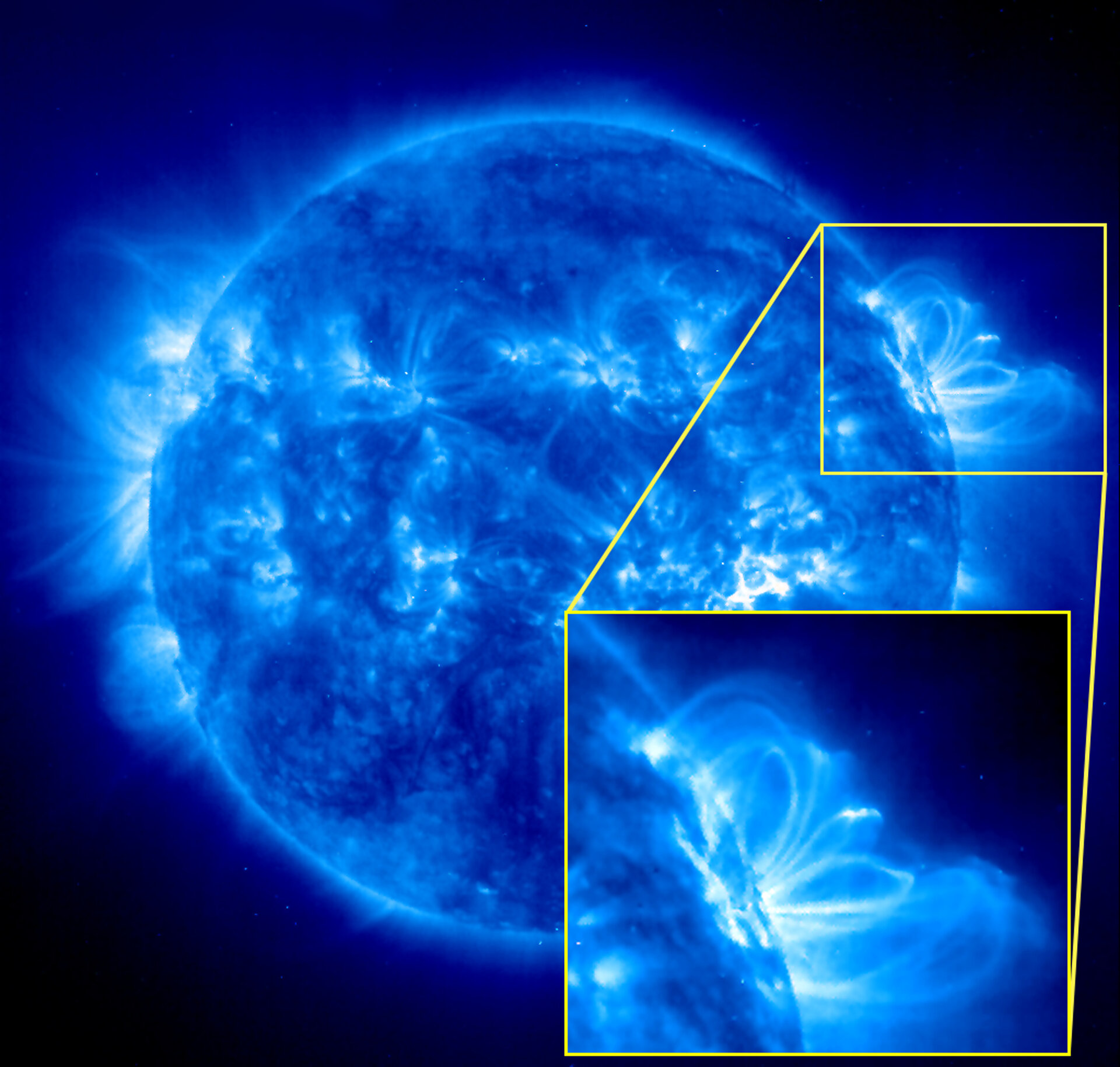 Huge loops of very hot gas rising above the Sun's surface vibrate with enormous energy at times of solar storms. This is the latest surprise from ESA's flotilla of spacecraft - SOHO, Ulysses and the four Cluster satellites - with which scientists are trying to make sense of how disturbances on the Sun affect the Earth.

As reported today at a scientific meeting on Santorini, Greece, ESA/NASA's SOHO spacecraft has observed many hot loops of gassy features, invisible to other instruments. These loops sway from side to side. Scientists investigating them are now sure that the vibrating loops play a key role in the Sun's most violent activity.

"It's like twanging a guitar string, although one that's tuned to a very low bass note," says Werner Curdt, from Germany's Max-Planck-Institut f|r Aeronomie and one of SOHO's principal investigators. "Nobody knew about these vibrations before. They occur only in extremely hot gas, which can be seen nice and clearly by SUMER [one of the instruments onboard SOHO] as if it were designed for this purpose. But to be honest, when SUMER was built, we didn't expect anything as amazing as this."

SUMER (Solar Ultraviolet Measurements of Emitted Radiation) measures the velocity of gassy features moving in the Sun's atmosphere. It observes the hot loops most plainly when they stand like enormous arches at the rim of the Sun, seen sideways on by SOHO. Locking onto extreme ultraviolet emissions from iron atoms, which are highly ionised at temperatures of 9 to 20 million 0C, the instrument detects the swaying motion by changes in the ultraviolet wavelength.

In a typical case, a hot loop, 350 000 kilometres long, rocks forwards and backwards every 20 minutes. The hot gas moves along the line of sight at speeds of up to 100 kilometres per second, or 360 000 kilometres per hour. The gas quickly cools and the motion dies down, after two or three oscillations.

The tension in the solar guitar string comes from an intense magnetic field that runs along the loop of gas. The finger that twangs it is probably a burst of very energetic particles coming from low in the Sun's atmosphere. When the gas in the loop is hit, the atoms lose almost all their electrons. That starts intense emission from hot iron ions and an oscillation of the entire loop.

What does the discovery mean for all of us?

This latest finding by SOHO will fascinate the experts. Dr Curdt's institute has organized the meeting jointly with the National Observatory of Athens. Its purpose is to draw together the results of observations of the Sun from the ground and from spacecraft and to see what is understood in the behaviour of the solar atmosphere.

Storms on the Sun can endanger astronauts, and damage spacecraft, electric power systems and computers. They may even affect the Earth's own weather. For this reason, ESA and other space agencies explore the causes and effects of sunstorms.

The ESA-NASA Ulysses spacecraft explores the heliosphere, the vast region around the Sun filled by the solar wind, where shocks can shake and squeeze the Earth's protective bubble, the magnetosphere. ESA's Cluster satellites investigate these solar effects near the Earth. SOHO itself uses many instruments to monitor the solar storms, including the huge explosions called flares, which are outbursts of light associated with energetic particles, and the great puffs of gas called mass ejections.

By revealing intense, local and short-lived activity of a kind that had escaped the scientists' notice, the vibrating loops are like a new piece of the jigsaw. When the vibrations die down, they release energy into the Sun's outer atmosphere. The link to particle outbursts low in the atmosphere may help scientists to understand why the outbursts are sometimes so strong that they disrupt the loops and unleash a solar flare. Only by tracing the connections between the different kinds of eruptions on the Sun can scientists expect to be able to issue reliable early warnings of solar outbursts affecting the Earth and its neighbourhood.

The Santorini meeting is looking ahead to future spacecraft, including ESA's Solar Orbiter due in about ten years' time. The scientists planning their space instruments will now want to make sure they are able to understand the energetic solar loops discovered by SOHO.

SOHO is a project of international cooperation between ESA and NASA. The spacecraft was built in Europe for ESA and equipped with instruments by teams of scientists in Europe and the USA. NASA launched SOHO in December 1995, and in 1998 ESA and NASA decided to extend its highly successful operations until 2003.