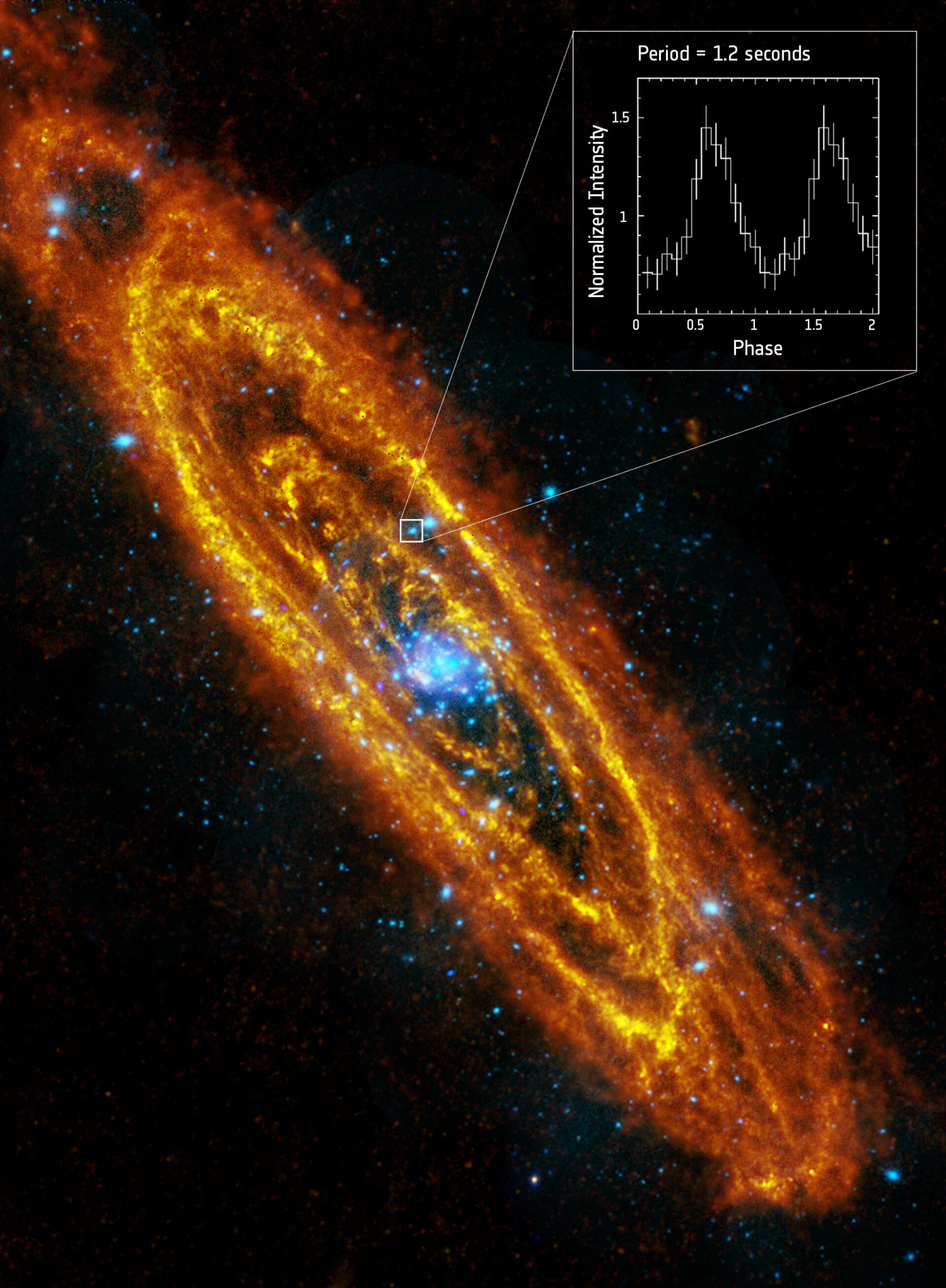 Decades of searching in the Milky Way’s nearby ‘twin’ galaxy Andromeda have finally paid off, with the discovery of an elusive breed of stellar corpse, a neutron star, by ESA’s XMM-Newton space telescope.

Andromeda, or M31, is a popular target among astronomers. Under clear, dark skies it is even visible to the naked eye. Its proximity and similarity in structure to our own spiral galaxy, the Milky Way, make it an important natural laboratory for astronomers. It has been extensively studied for decades by telescopes covering the whole electromagnetic spectrum.

Despite being extremely well studied, one particular class of object had never been detected: spinning neutron stars.

Neutron stars are the small and extraordinarily dense remains of a once-massive star that exploded as a powerful supernova at the end of its natural life. They often spin very rapidly and can sweep regular pulses of radiation towards Earth, like a lighthouse beacon appearing to flash on and off as it rotates.

Binary systems hosting a neutron star like this are quite common in our own Galaxy, but regular signals from such a pairing had never before been seen in Andromeda.

Now, astronomers systematically searching through the archives of data from XMM-Newton X-ray telescope have uncovered the signal of an unusual source fitting the bill of a fast-spinning neutron star.

It spins every 1.2 seconds, and appears to be feeding on a neighbouring star that orbits it every 1.3 days.

“We were expecting to detect periodic signals among the brightest X-ray objects in Andromeda, in line with what we already found during the 1960s and 1970s in our own Galaxy,” says Gian Luca Israel, from INAF-Osservatorio Astronomica di Roma, Italy, one of the authors of the paper describing the results, “But persistent, bright X-ray pulsars like this are still somewhat peculiar, so it was not completely a sure thing we would find one in Andromeda.

“We looked through archival data of Andromeda spanning 2000–13, but it wasn’t until 2015 that we were finally able to identify this object in the galaxy’s outer spiral in just two of the 35 measurements.”

While the precise nature of the system remains unclear, the data imply that it is unusual and exotic.

“It could be what we call a ‘peculiar low-mass X-ray binary pulsar’ – in which the companion star is less massive than our Sun – or alternatively an intermediate-mass binary system, with a companion of about two solar masses,” says Paolo Esposito of INAF-Istituto di Astrofisica Spaziale e Fisica Cosmica, Milan, Italy.

“We need to acquire more observations of the pulsar and its companion to help determine which scenario is more likely.”

“The well-known Andromeda galaxy has long been a source of exciting discoveries, and now an intriguing periodic signal has been detected by our flagship X-ray mission,” adds Norbert Schartel, ESA’s XMM-Newton project scientist.

“We’re in a better position now to uncover more objects like this in Andromeda, both with XMM-Newton and with future missions such as ESA’s next-generation high-energy observatory, Athena.”

EXTraS, Exploring the X-ray Transient and variable Sky, is a European Commission FP7-funded project to systematically explore the content of XMM-Newton data in the time domain that is released to the astronomical community.