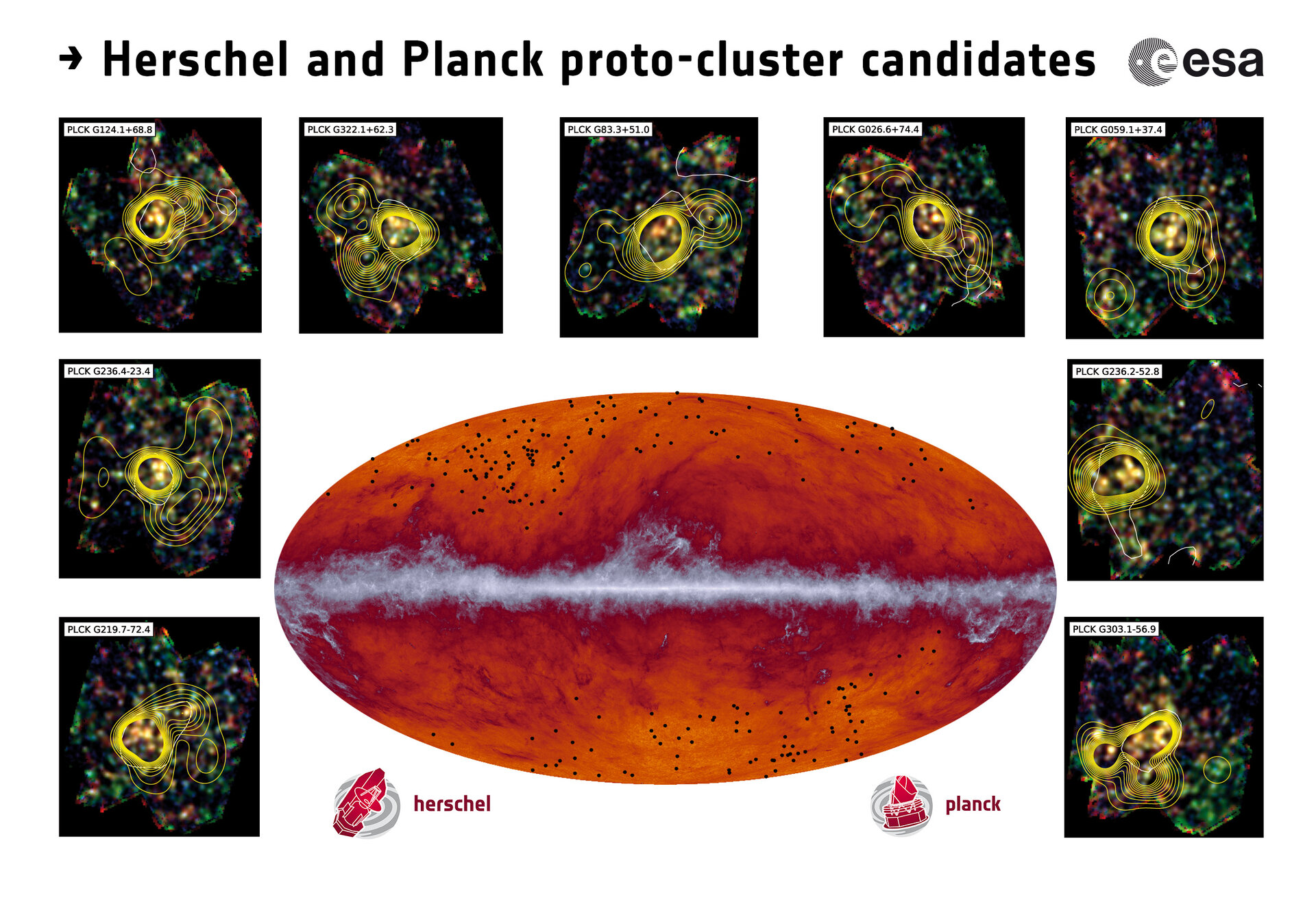 By combining observations of the distant Universe made with ESA’s Herschel and Planck space observatories, cosmologists have discovered what could be the precursors of the vast clusters of galaxies that we see today.

Galaxies like our Milky Way with its 100 billion stars are usually not found in isolation. In the Universe today, 13.8 billion years after the Big Bang, many are in dense clusters of tens, hundreds or even thousands of galaxies.

However, these clusters have not always existed, and a key question in modern cosmology is how such massive structures assembled in the early Universe.

Pinpointing when and how they formed should provide insight into the process of galaxy cluster evolution, including the role played by dark matter in shaping these cosmic metropolises.

Now, using the combined strengths of Herschel and Planck, astronomers have found objects in the distant Universe, seen at a time when it was only three billion years old, which could be precursors of the clusters seen around us today.

Planck’s main goal was to provide the most precise map of the relic radiation of the Big Bang, the cosmic microwave background. To do so, it surveyed the entire sky in nine different wavelengths from the far-infrared to radio, in order to eliminate foreground emission from our galaxy and others in the Universe.

But those foreground sources can be important in other fields of astronomy, and it was in Planck’s short wavelength data that scientists were able to identify 234 bright sources with characteristics that suggested they were located in the distant, early Universe.

Herschel then observed these objects across the far-infrared to submillimetre wavelength range, but with much higher sensitivity and angular resolution.

Herschel revealed that the vast majority of the Planck-detected sources are consistent with dense concentrations of galaxies in the early Universe, vigorously forming new stars.

Each of these young galaxies is seen to be converting gas and dust into stars at a rate of a few hundred to 1500 times the mass of our Sun per year. By comparison, our own Milky Way galaxy today is producing stars at an average rate of just one solar mass per year.

While the astronomers have not yet conclusively established the ages and luminosities of many of these newly discovered distant galaxy concentrations, they are the best candidates yet found for ‘proto-clusters’ – precursors of the large, mature galaxy clusters we see in the Universe today.

“Hints of these kinds of objects had been found earlier in data from Herschel and other telescopes, but the all-sky capability of Planck revealed many more candidates for us to study,” says Hervé Dole of the Institut d’Astrophysique Spatiale, Orsay, lead scientist of the analysis published today in Astronomy & Astrophysics.

“We still have a lot to learn about this new population, requiring further follow-up studies with other observatories. But we believe that they are a missing piece of cosmological structure formation.”

“We are now preparing an extended catalogue of possible proto-clusters detected by Planck, which should help us identify even more of these objects,” adds Ludovic Montier, a CNRS researcher at the Institut de Recherche en Astrophysique et Planétologie, Toulouse, who is the lead scientist of the Planck catalogue of high-redshift source candidates, which is about to be delivered to the community.

“This exciting result was possible thanks to the synergy between Herschel and Planck: rare objects could be identified from the Planck data covering the entire sky, and then Herschel was able to scrutinise them in finer detail,” says ESA’s Herschel Project Scientist, Göran Pilbratt.

“Both space observatories completed their science observations in 2013, but their rich datasets will be exploited for plentiful new insights about the cosmos for years to come.”

“High-redshift infrared galaxy overdensity candidates and lensed sources discovered by Planck and confirmed by Herschel-SPIRE,” is authored by the Planck Collaboration.

Planck detected the sky at nine frequencies, from 30 GHz to 857 GHz. The Planck frequencies used to detect the candidate proto-clusters in this study were 857 GHz, 545 GHz and 353 GHz. The follow-up observations made by Herschel’s SPIRE instrument were at 250, 350 and 500 microns. The SPIRE 350 micron and 500 micron bands overlap with Planck’s High Frequency Instrument (HFI) at 857 GHz and 545 GHz.

The Planck Scientific Collaboration consists of all the scientists who have contributed to the development of the mission, and who participate in the scientific exploitation of the data during the proprietary period. These scientists are members of one or more of four consortia: the LFI Consortium, the HFI Consortium, the DK-Planck Consortium and ESA’s Planck Science Office. The two European-led Planck Data Processing Centres are located in Paris, France and Trieste, Italy. The LFI consortium is led by N. Mandolesi, ASI, Italy (deputy PI: M. Bersanelli, Universita’ degli Studi di Milano, Italy), and was responsible for the development and operation of LFI. The HFI consortium is led by J.L. Puget, Institut d’Astrophysique Spatiale in Orsay, France (deputy PI: F. Bouchet, Institut d’Astrophysique de Paris, France), and was responsible for the development and operation of HFI.