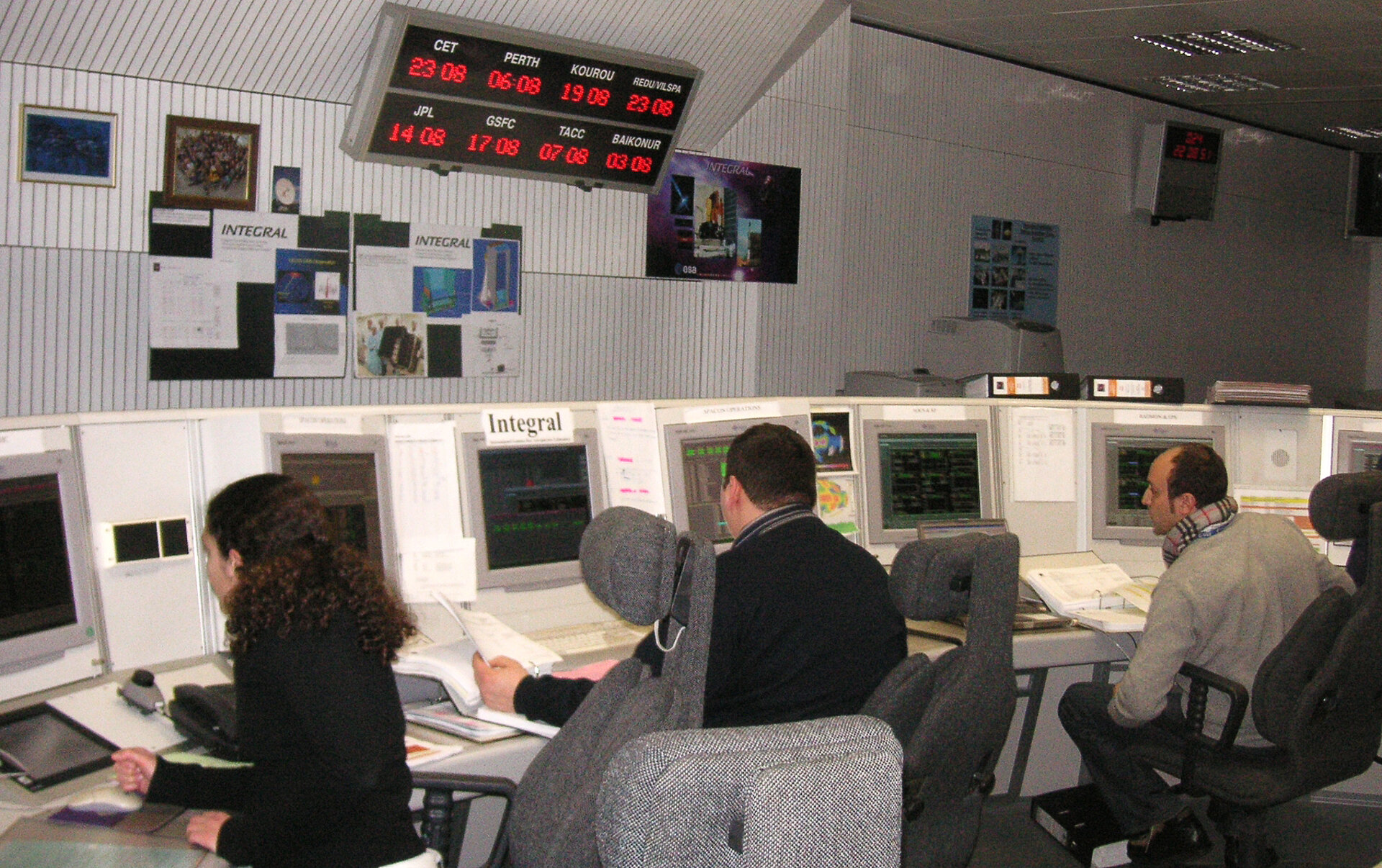 Integral, ESA's orbiting gamma-ray astrophysics mission launched in 2002, was designed to look up, enabling its sensitive imagers and spectrometers to gather radiation from objects deep in the Universe.

And while they can observe distant objects, these instruments are usually kept pointing well away from bright sources. Our planet itself, and in particular the radiation belts around it, emit and reflect high levels of energetic radiation in multiple wavelengths; this energy could easily exceed the thermal and star tracker requirements of the instruments unless precautions are taken.

In addition, Integral depends on a highly sensitive star tracker to detect the seemingly fixed position of certain stars and keep itself pointed precisely at observation targets, typically active stars located in far distant galaxies or in the heart of our own galaxy.

The star tracker must be kept pointed at least 15 degrees away from Earth, otherwise excessive reflected light from the Earth will blind the detectors making attitude determination and control impossible.

It was with some professional trepidation, therefore, that the Flight Control Team (FCT) at ESA's European Space Operations Centre (ESOC), in Darmstadt, responded to a proposal from mission scientists to point Integral directly at Earth.

Scientists hoped to not only calibrate the instruments using Earth as a dark object but also to study what happens when Earth's disk blocks the isotropic radiation from the cosmic diffuse high-energy background radiation. That emission is believed to consist of a yet unresolved number of faint extragalactic sources and scientists are keen to prove this hypothesis.

(For more on the unique science results from Integral's Earth observation campaign, see the related article Integral looks at Earth to seek source of cosmic radiation.)

After carefully assessing Integral's instruments and seeking advice from the original spacecraft and instrument manufacturers, it was deemed possible to allow them to view the Earth. And while the hyper-sensitive star tracker would survive the over-exposure, it would be useless for attitude and orientation control during the Earth-facing period.

"For the star tracker, the Earth is an object we should avoid. Excess radiation will overload the sensors, and the Earth reflects plenty," says Michael Schmidt, Spacecraft Operations Manager for Integral at ESOC.

Schmidt explains that solving the challenge was a multi-team effort, with scientists and engineers from Alenia Spazio -- the Integral prime contractor -- the mission control team at ESOC and the mission science operations team at ESAC all working to devise a way to maintain accurate spacecraft control while viewing the Earth.

The solution was to use a combination of Integral's Sun sensor and the onboard gyroscopes to provide attitude control for Integral for the entire 10-hour Earth-facing period. These devices are normally used to monitor and control the movement of the satellite while following planned observation routines.

"But with this control procedure, slewing Integral is more or less impossible. Therefore, before turning the star tracker off, we had to slew the spacecraft to point at a specific spot and then wait for the Earth to naturally come into the instruments' field of view," says Schmidt. Slew refers to rotation of the spacecraft to point in a new direction.

In a further complication, the best science results would only be obtained when Integral was at perigee, its closest approach to Earth. At this point, the spacecraft would lose line-of-sight contact with the mission's normal ground control stations, Redu, in Belgium, and Goldstone, in California.

Thus, slewing had to be done in advance and there was little room to respond in real time should any unexpected problems occur. "We asked NASA for support, and they really came through, making two antennas at their Goldstone ground station available for us," says Schmidt.

With assistance from specialists on ESOC's flight dynamics team, the FCT also defined a stand-by 'emergency slew' procedure that would quickly slew the spacecraft away from the Earth in the event of any concerns over the sensitive instruments onboard.

It was never intended that these flight control procedures would be used during routine operations, so spacecraft operations engineers had to confirm, test and validate the entire process more or less on-the-fly, using a simulator at ESOC.

Extraordinary planning and testing pay off

The night went off without a hitch, thanks in part to good teamwork and support from various other ESOC teams. The experience allowed the FCT to repeat the manoeuvre later in January and February. "We are now waiting for the results of the detailed processing of the data by the Integral Science Data Centre, in Versoix, and the Principle Investigator institutes elsewhere in Europe, says Schmidt.

With the successful Earth observation campaign under its belt, Integral has generated valuable data on Earth radiation and the cosmic diffuse background that should prove invaluable in extending scientists' knowledge of a poorly understood area of astrophysics.