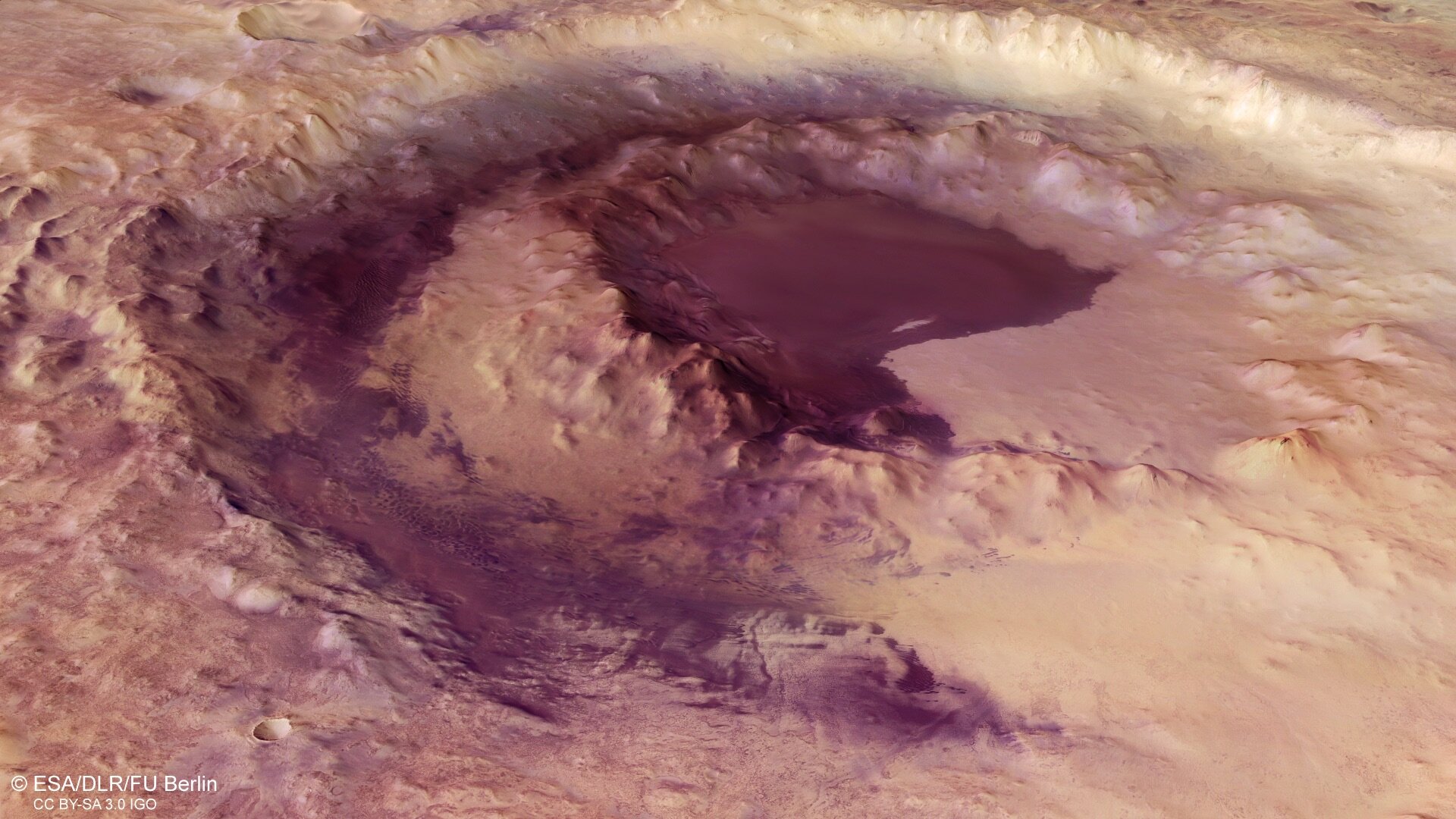 Mars was once believed to be criss-crossed by a system of irrigation canals – dark troughs that sliced across the planet’s surface, excavated by an intelligent society of thirsty martians. The astronomer who promoted this idea lends his name to the crater shown in this image from ESA’s Mars Express: Lowell crater.

American astronomer and author Percival Lowell is perhaps best known for popularising this canal theory in the late 1800s and early 1900s; the idea was initially proposed by Italian scientist Giovanni Schiaparelli, who noted the presence of dark lines on Mars in observations from the 1870s. Schiaparelli described these features as canali, later translated not as ‘channels’ or ‘gullies’, but as ‘canals’ – a phrase that hinted at a somewhat more artificial origin.

While these canali were later shown to be an optical illusion as astronomical observations improved immeasurably in quality and precision, the notion of a race of parched, canal-building martians persisted for some time and went on to have a huge influence on the science fiction of the time, perhaps spurred on by the rapid industrialisation – and canal-building – occurring on Earth throughout the 1900s.

Lowell established an observatory in Arizona, USA, purely for the observation of Mars, a planet that had long captured his imagination and interest. Despite his wider astronomical interest in our Solar System – including predictions of a ‘Planet X’ lurking beyond Uranus, later shown to be Pluto – Lowell is most prominently connected to the Red Planet, making the astronomer a fitting namesake for the crater shown in these images from Mars Express.

The data were gathered across seven different spacecraft orbits to create the mosaic; Mars Express’ orbit in recent months allowed several new observations of Lowell crater, which are used alongside older data to form this detailed new view.

Lowell crater is roughly 200 km in diameter and located in a region of Mars known as Aonia Terra, within the planet’s ancient southern highlands. The impact that created it is thought to have taken place between 3.7 and 3.9 billion years ago; it has endured erosion and infilling since. Its crater floor has become covered and flattened by various layers of sediment, and its outer rim is marked by small dunes and gullies.

The image also highlights a ring of mountains rising up from the crater floor and spanning 90 km across. This so-called ‘peak ring’ is thought to have formed along with the crater. The immense energy of a large impact event causes material to surge upwards before collapsing down again, forming the kind of complex morphology seen here, with an irregular mountain range encircling the crater’s centre, inside the main crater rim.

Such features are also seen in craters here on Earth, and on Venus, Mercury, and the Moon. One notable terrestrial crater that displays this kind of peak ring is Chicxulub crater – famous for its role in the extinction of the dinosaurs some 66 million years ago. Studies and simulations of Chicxulub, which is around the same size as Lowell crater, have shown a peak ring that formed as a huge, unstable central peak later collapsed.

Mars Express has been in orbit around the Red Planet since 2003, and continues to provide a wealth of information about our planetary neighbour.