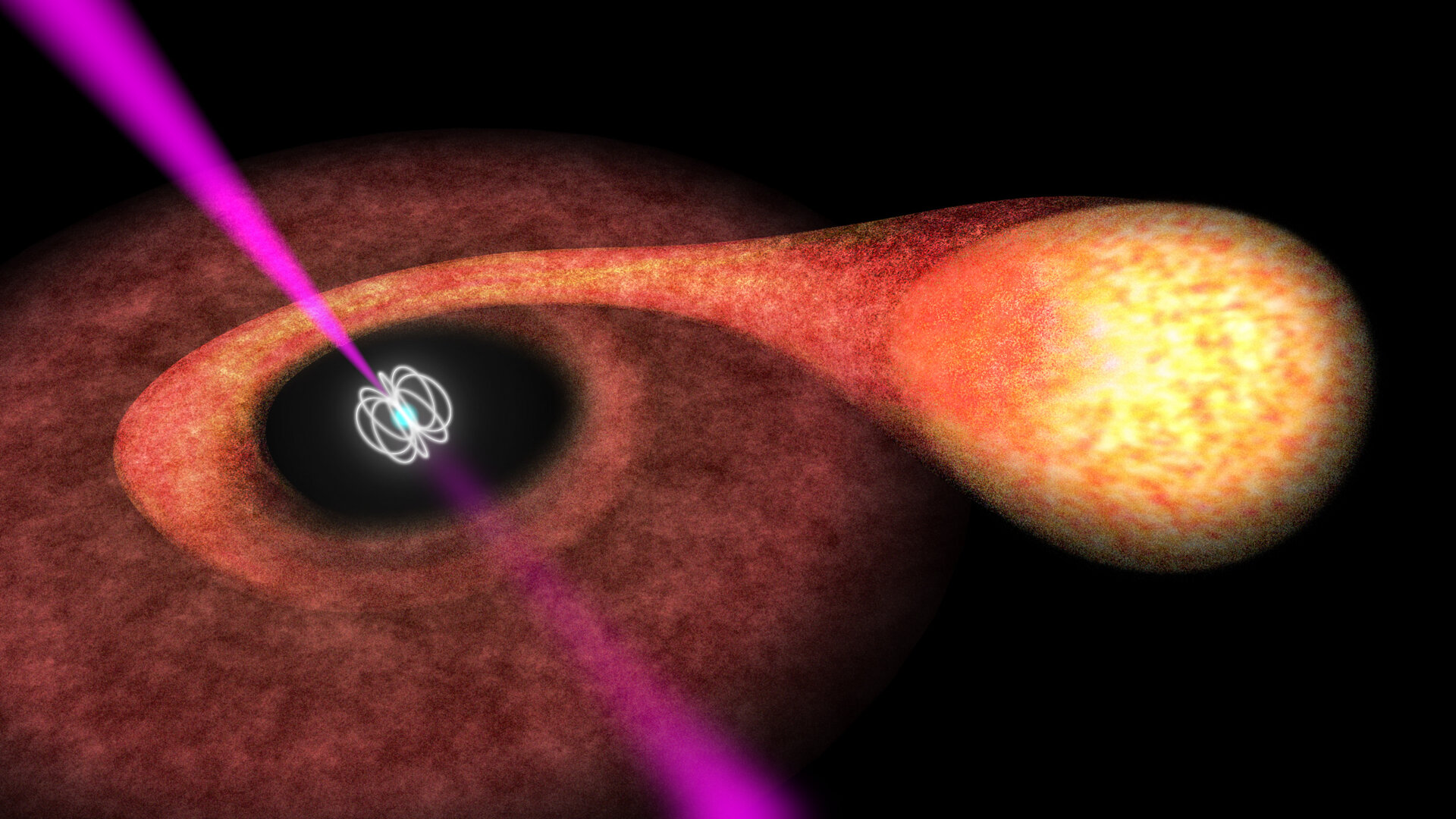 Astronomers using ESA’s Integral and XMM-Newton space observatories have caught a fast-spinning ‘millisecond pulsar’ in a crucial evolutionary phase for the first time, as it swings between emitting pulses of X-rays and radio waves.

Pulsars are spinning, magnetised neutron stars, the dead cores of massive stars that exploded as a dramatic supernova after having burned up their fuel. As they spin, they sweep out pulses of electromagnetic radiation hundreds of times per second, like beams from a lighthouse. This tells us that the spin period of the neutron stars can be as short as a few milliseconds.

Pulsars are classified according to how their emission is generated. For example, radio pulsars are powered by the rotation of their magnetic field, while X-ray pulsars are fuelled by the accretion of material siphoned off from a companion star.

Theory holds that initially slowly rotating neutron stars with a low-mass companion are spun up as matter accretes onto them from a surrounding disc fed by the companion. X-rays are emitted as the accreting material heats up as it falls onto the neutron star.

After a billion years or so, the rate of accretion drops and the pulsars are thought to switch on again as a radio-emitting millisecond pulsar.

There is thought to be an intermediate phase during which they swing back and forth between the two states several times, but until now, there has been no direct and conclusive evidence for this transitional phase.

Thanks to the combined forces of ESA’s Integral and XMM-Newton space observatories, along with follow-up observations by NASA’s Swift and Chandra satellites and by ground-based radio telescopes, scientists have finally caught a pulsar in the act of changing between the two evolutionary steps.

“The search is finally over: with our discovery of a millisecond pulsar that, within only a few weeks, switched from being accretion-powered and X-ray-bright to rotation-powered and bright in radio waves, we finally have the missing link in pulsar evolution,” says Alessandro Papitto from the Institute of Space Sciences in Barcelona, Spain, who led the research published this week in Nature.

The object, identified as IGR J18245-2452, was first detected in X-rays on 28 March 2013 by Integral in the globular cluster M28, which lies in the constellation Sagittarius.

Observations by XMM-Newton determined the pulsar’s spin period to be 3.9 milliseconds, meaning that it rotates on its axis more than 250 times every second, clearly identifying it as an X-ray-bright millisecond pulsar.

But comparing its spin period and other key characteristics with those of other known pulsars in M28 showed it matched perfectly those of another pulsar that had been observed in 2006 – but only at radio wavelengths.

“At that time, it appeared to be just another millisecond radio pulsar, but now here it was shining in X-rays – this is clearly no ordinary pulsar,” adds Dr Papitto.

The astronomers kept monitoring the object with X-ray telescopes, but also started a series of radio observations, on the lookout for hints that it might change personalities again.

What the astronomers didn’t expect was that the change in behaviour would happen within just a few weeks.

“We used to think the change would occur only once over the billion-year evolution of these systems, yet within a month, the neutron star swung back and forth between an X-ray and a radio pulsar state, showing the switch can be made even on extremely short timescales,” says co-author Enrico Bozzo of the University of Geneva, Switzerland.

Despite occurring on a far quicker timescale than previously imagined, the characteristics of the transformation, which is thought to lie in the interplay between the pulsar’s magnetic field and the pressure of material falling onto it from its low-mass companion star, still fits current theory.

When the inflow of material from the neighbouring star is more intense, the high density of matter shuts off the radio emission, and the pulsar is only visible through the X-rays emitted by the accreting matter as it heats up while falling onto the pulsar.

Conversely, when the accretion rate decreases, the magnetic field of the pulsar expands and pushes any remaining matter away from the pulsar, allowing the radio emission to switch back on.

Looking back through archival data for this particular pulsar, the astronomers have shown that these cycles may repeat on timescales of just a few years.

“The discovery of this transitional pulsar completes a decades-long quest for such an object and will help us to understand better the evolution of pulsars,” says Erik Kuulkers, Integral Project Scientist at ESA.

“Although it took a long time to make this first detection, we believe that pulsars in such binary systems are fairly common, so we’re looking forward to finding more,” adds Norbert Schartel, XMM-Newton Project Scientist at ESA.

Swings between rotation and accretion power in a millisecond binary pulsar by A. Papitto et al. is published in Nature 26 September 2013.