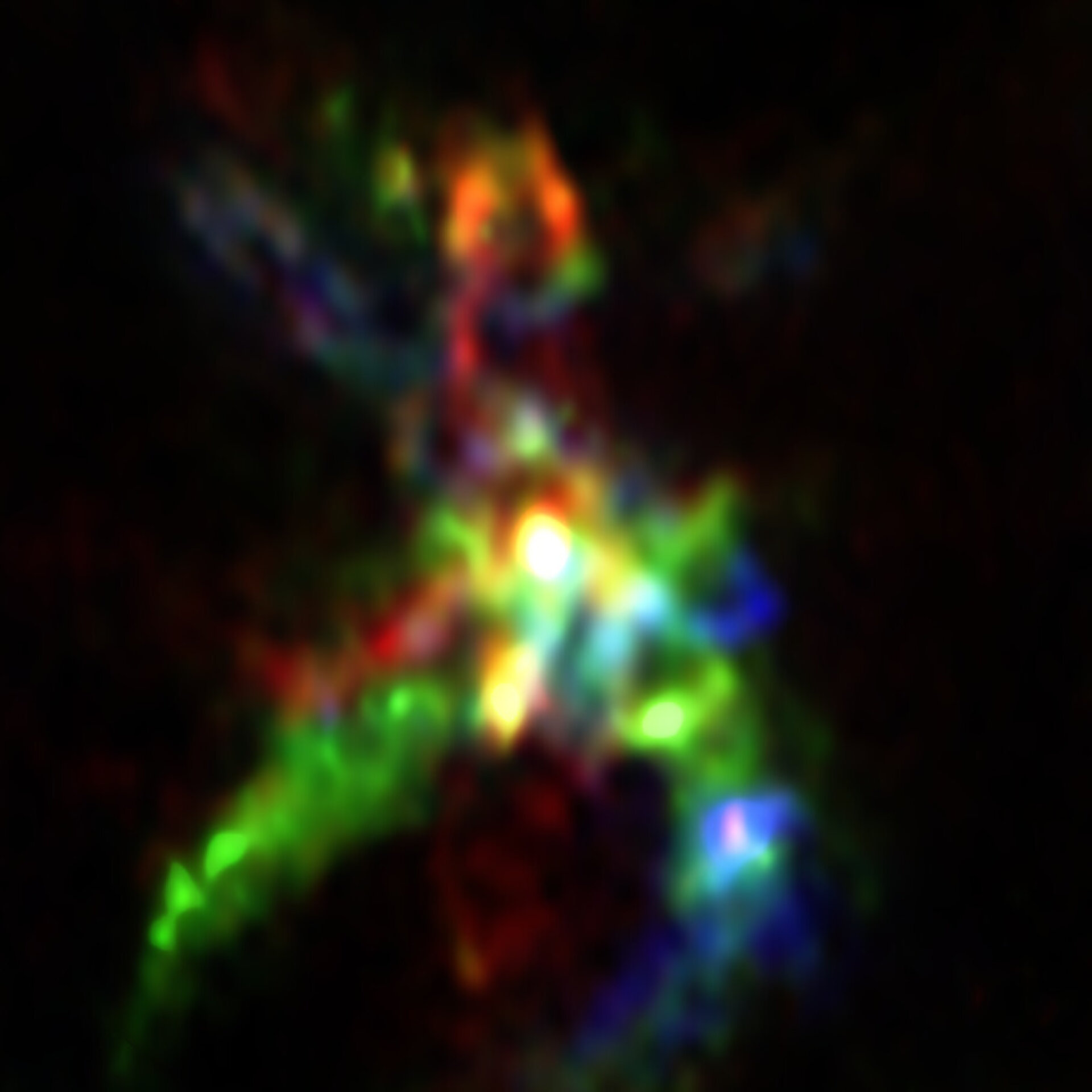 Astronomers using the combined powers of ESA’s Rosetta mission and the ground-based Atacama Large Millimeter/submillimeter Array (ALMA) have traced the journey of phosphorus – one of life’s building blocks – from star-forming regions to comets.

An essential element for life as we know it, phosphorus is present in our DNA and cell membranes. But how it arrived on the early Earth is something of a mystery.

A new study combining data collected by the Rosetta mission at Comet 67P/Churyumov–Gerasimenko with ALMA observations of the star-forming region AFGL 5142 has revealed, for the first time, where molecules containing phosphorus form in the Universe. The research also shows how this element is carried in comets and how a particular molecule – phosphorus monoxide – may have played a crucial role in starting life on our planet.

"Life appeared on Earth about four billion years ago, but we still do not know the processes that made it possible," says Víctor Rivilla of INAF – Arcetri Astrophysical Observatory in Florence, Italy, who lead the new study.

New stars and planetary systems arise in cloud-like regions of gas and dust in between stars, making these interstellar clouds the ideal places to start the search for life’s building blocks.

By observing such a stellar nursery with ALMA, Víctor and collaborators could pinpoint the formation sites of phosphorus-bearing molecules, which appear to be created while massive stars are formed. As flows of gas from young massive stars open up cavities in the surrounding cloud material, molecules containing phosphorus form on the cavity walls through the combined action of shocks and radiation from the infant star.

The astronomers have also shown that phosphorus monoxide, which combines phosphorus with one oxygen atom, is the most abundant phosphorus-bearing molecule in the cavity walls of this particular star-forming region.

Following the cosmic trail of this life-enabling compound, the team took their investigations closer to home, looking at comets in the Solar System.

If the cavity walls of an interstellar cloud collapses to form a star, especially low-mass ones like our Sun, phosphorus monoxide can freeze out and get trapped in the icy dust grains that remain around the new star. Even before the star is fully formed, those dust grains come together to form pebbles, rocks and ultimately comets, which become transporters of phosphorus monoxide.

The ROSINA instrument on Rosetta, which collected data at Comet 67P/C-G for over two years, had already found hints of phosphorus at the comet in 2016, but it was not clear what molecule had carried it there. After the ALMA observations suggested that phosphorus monoxide would be a very likely candidate, ROSINA scientists went back to their data and eventually found evidence of this molecule at Rosetta’s comet.

“Phosphorus is essential for life as we know it,” says co-author and ROSINA Principal Investigator Kathrin Altwegg from University of Bern, Switzerland.

“As comets most probably delivered large amounts of organic compounds to the Earth, the phosphorus monoxide found in Comet 67P/C-G may strengthen the link between comets and life on Earth.”

This first sighting of phosphorus monoxide at a comet helps astronomers draw a connection between star-forming regions, where the molecule is created, all the way to our planet.

“The combination of the ALMA and ROSINA data has revealed a sort of chemical thread during the whole process of star formation, in which phosphorus monoxide plays the dominant role,” explains Víctor.

“The detection of phosphorus monoxide was clearly thanks to an interdisciplinary exchange between telescopes on Earth and instruments in space,” adds Altwegg.

This and similar results are a testament to the synergy between pioneering space science missions, such as the fleet operated by ESA, and cutting-edge ground-based astronomical facilities like the ones run in Chile by the European Southern Observatory (ESO), ALMA’s European executive partner.

“This study takes one of Rosetta’s major results regarding prebiotic compounds – the detection of phosphorus, in this case – and digs further into the data,” says Matt Taylor, ESA Rosetta project scientist.

“It is an inspiring demonstration of the broader impact and importance of the cometary observations made by Rosetta to the broader astronomy community, deepening our understanding of how stars and planetary systems form and evolve.”

“ALMA and ROSINA detections of phosphorus-bearing molecules: the interstellar thread between star-forming regions and comets” by V. M. Rivilla et al. is published in Monthly Notices of the Royal Astronomical Society.

Rosetta is an ESA mission. It launched in 2004 and rendezvoused with Comet 67P/Churyumov–Gerasimenko in 2014 to study it close up as it orbited around the Sun. It also deployed the lander Philae onto the comet's surface. Rosetta completed its mission by descending to the comet on 30 September 2016.

ESO is the foremost intergovernmental astronomy organisation in Europe and the world’s most productive ground-based astronomical observatory by far.