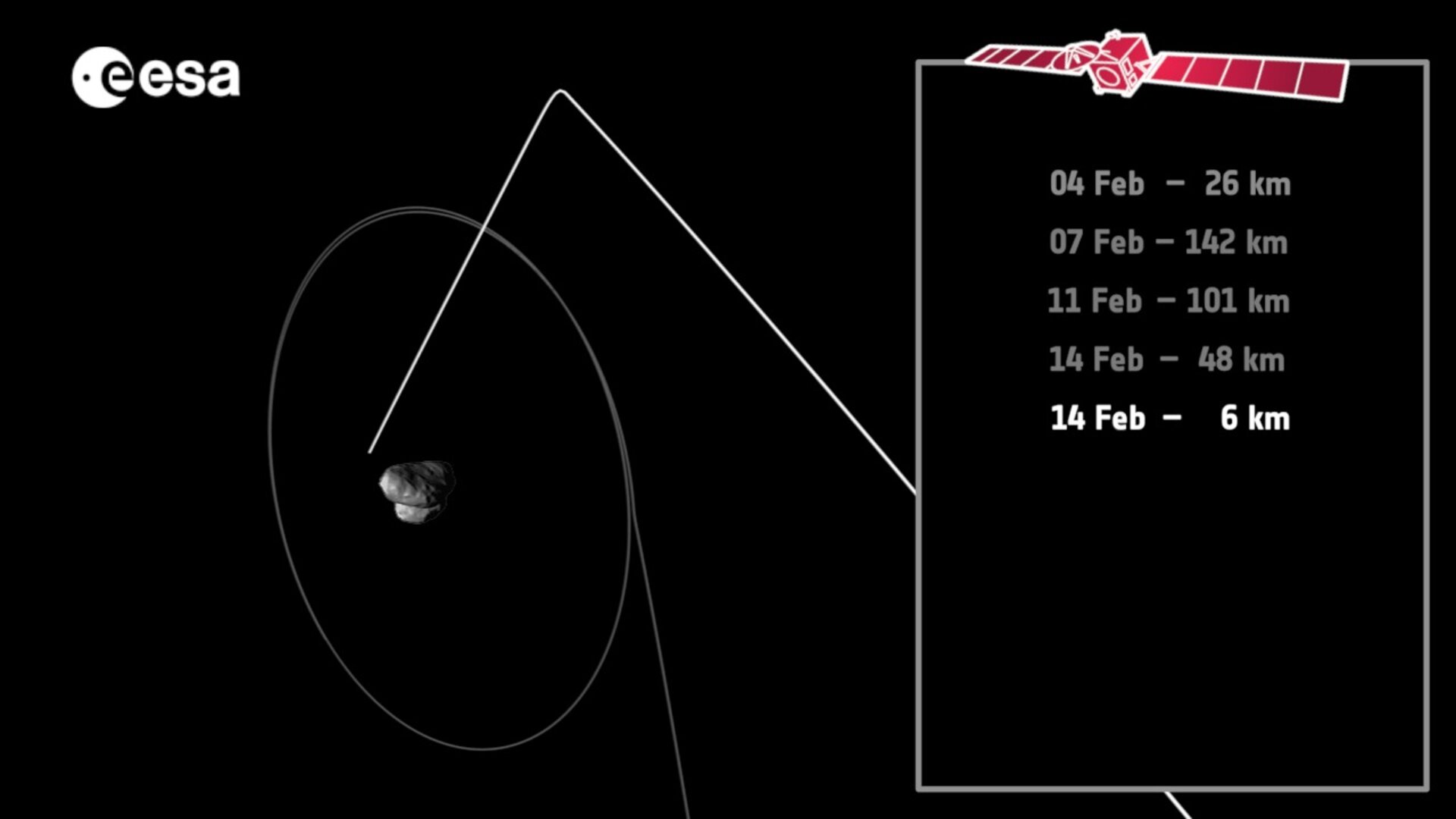 ESA’s Rosetta probe is preparing to make a close encounter with its comet on 14 February, passing just 6 km from the surface.

Yesterday was Rosetta’s last day at 26 km from Comet 67P/Churyumov–Gerasimenko, marking the end of the current orbiting period and the start of a new phase for the rest of this year.

Today, Rosetta is moving into a new path ahead of a very close encounter next week. First, it will move out to a distance of roughly 140 km from the comet by 7 February, before swooping in for the close encounter at 12:41 GMT (13:41 CET) on 14 February. The closest pass occurs over the comet’s larger lobe, above the Imhotep region.

“The upcoming close flyby will allow unique scientific observations, providing us with high-resolution measurements of the surface over a range of wavelengths and giving us the opportunity to sample – taste or sniff – the very innermost parts of the comet’s atmosphere,” says Matt Taylor, ESA’s Rosetta project scientist.

The flyby will take Rosetta over the most active regions of the comet, helping scientists to understand the connection between the source of the observed activity and the atmosphere, or coma.

In particular, they will be looking for zones where the outflowing gas and dust accelerates from the surface and how these constituents evolve at larger distances from the comet.

The comet’s surface is already known to be very dark, reflecting just 6% of the light that falls on it. During the close flyby, Rosetta will pass over the comet with the Sun directly behind, allowing shadow-free images to be collected. By studying the reflectivity of the nucleus as it varies with the angle of the sunlight falling on it, scientists hope to gain a more detailed insight into the dust grains on the surface.

“After this close flyby, a new phase will begin, when Rosetta will execute sets of flybys past the comet at a range of distances, between about 15 km and 100 km,” says Sylvain Lodiot, ESA’s spacecraft operations manager. 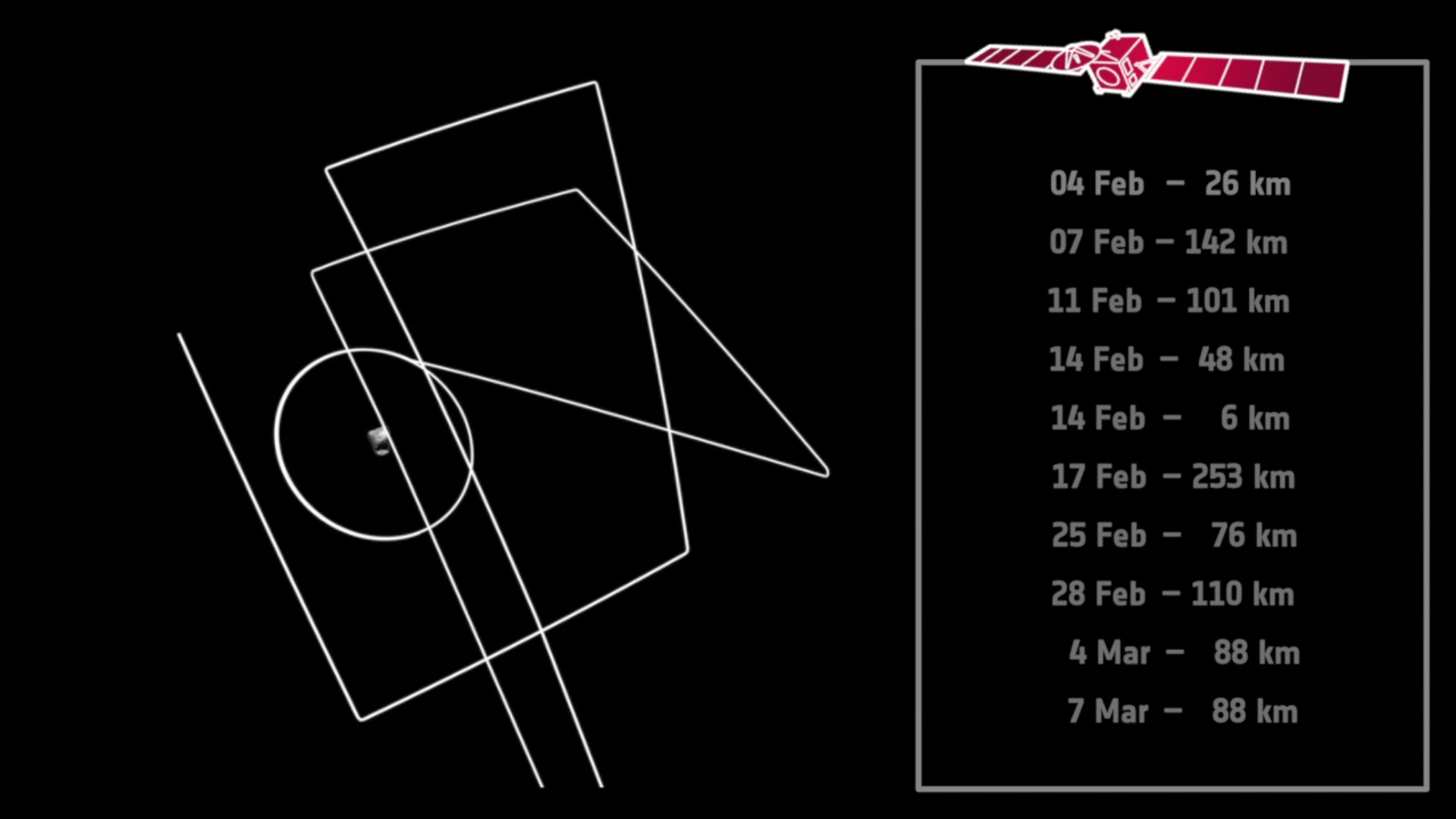 It was always planned to change from ‘bound orbits’ to flyby trajectories at this point in the mission, based on predictions of increasing cometary activity. The range of flyby distances also balances the various needs of Rosetta’s 11 instruments in order to optimise the mission’s scientific return.

During some of the close flybys, Rosetta will encounter the comet almost in step with the rotation, allowing the instruments to monitor a single point on the surface as it passes by.

Meanwhile, the more distant flybys will provide the broader context of a wide-angle view of the nucleus and its growing coma.

“We’re in the main science phase of the mission now, so throughout the year we’ll be continuing with high-resolution mapping of the comet,” says Matt.

“We’ll sample the gas, dust and plasma from a range of distances as the comet’s activity increases and then subsides again later in the year.”

Perihelion, closest approach to the Sun, occurs on 13 August when the comet and Rosetta will be 186 million kilometres from the Sun, between the orbits of Earth and Mars.

In the month before perihelion, as activity is reaching a peak, the team are planning to study one of the comet’s jets in greater detail than ever.

“We hope to target one of these regions for a fly-through, to really get a taste of the outflow of the comet,” adds Matt.

After perihelion and once the comet’s activity begins to subside, the mission team will determine if and when to return to a bound orbit around the comet, and how long Rosetta might be able to operate beyond the end of 2015.

Follow the Rosetta blog and the @ESA_Rosetta and @esaoperations twitter accounts for further details on the upcoming spacecraft operations.

Read the blog article “Where is Philae? When will it wake up?” for more information on the status of Rosetta’s lander.