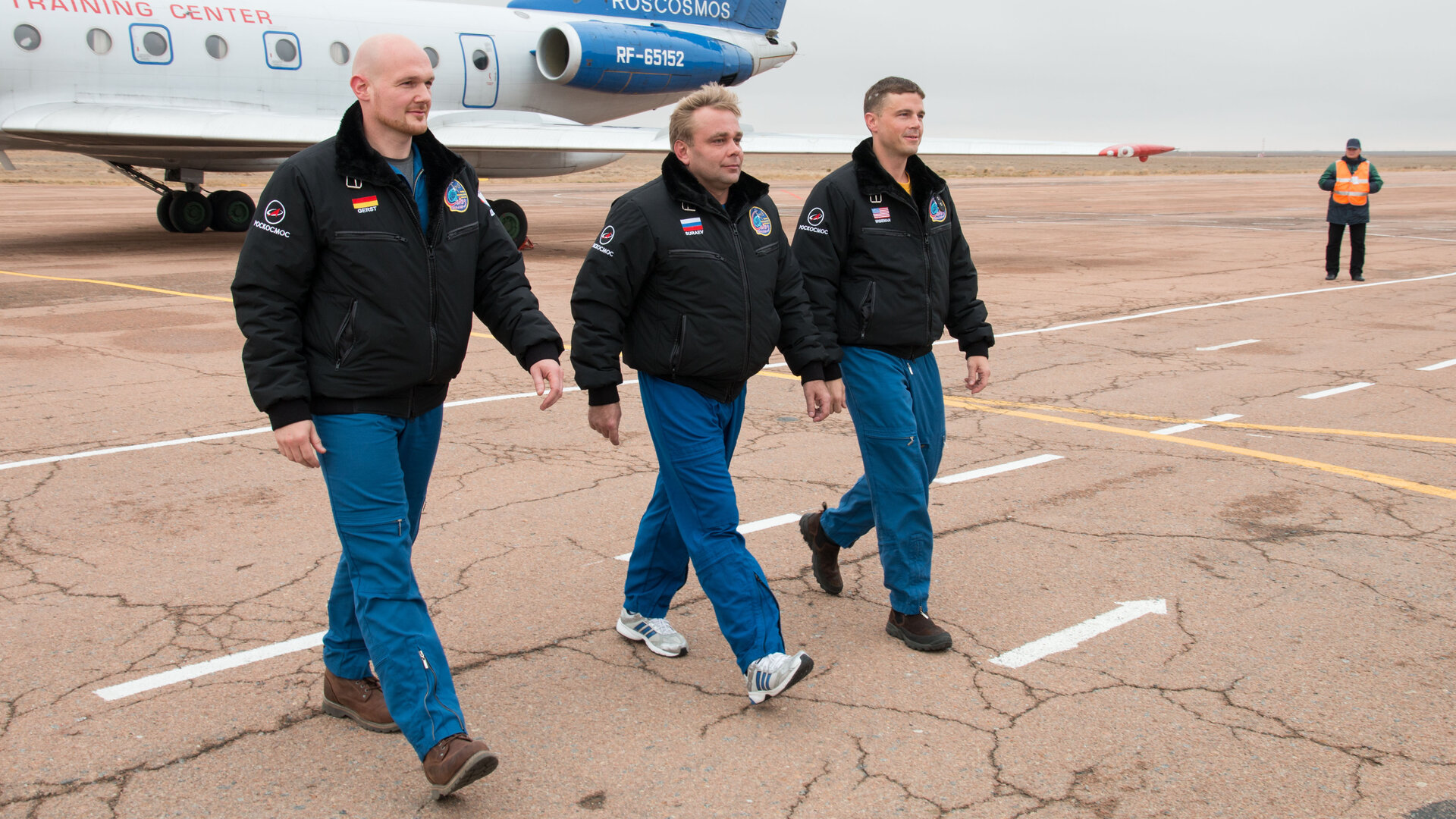 ESA astronaut Alexander Gerst flew to the International Space Station in a Soyuz spacecraft that can hold three astronauts. The Station is permanently crewed by six astronauts, meaning that two Soyuz are launched each year and Station astronauts spend around three months with three other crewmembers before they are replaced by a new Expedition.

Alexander’s crewmates, cosmonaut commander Maxim Suraev and NASA astronaut Reid Wiseman, will arrive on the Station as the second part of Expedition 40. After three months the original crewmembers of Expedition 40 left for Earth and Alexander, Maxim and Reid took over the first half of Expedition 41.

Maxim Suraev was born in the Urals. During his childhood, he lived in several places due to his father's military commitments. Maxim is an air force pilot and a qualified diver.

After being accepted in the cosmonaut corps, he awaited his first flight opportunity for over 12 years. In the meantime, he studied law and worked at NASA’s Johnson Space Center for a year as director of operations.

Maxim finally flew to space in 2009, commanding a Soyuz spacecraft. As flight engineer for Expeditions 21 and 22, he completed the integration of a research module into the Russian segment and performed a six-hour spacewalk.

Maxim kept a blog while in space. The 42-year-old cosmonaut believes that human space exploration will bring new knowledge and new sources of energy back to Earth.

Reid’s desire to become an astronaut strengthened when he witnessed a Space Shuttle launch in 2001. As a naval aviator and test pilot, he became used to working long hours under extreme conditions.

Flying is his passion and during his career he supported several high-profile military operations in Iraq. He was deployed in the Middle East when he was invited to join NASA’s 20th Astronaut Group. Reid passed a tough selection process among 3500 applicants to qualify as an astronaut in 2011.

Reid has experience as an International Space Station Capsule Communicator, or Capcom, at Mission Control in Houston.

Steven Swanson is an engineer and NASA astronaut. He flew on two Shuttle flights, STS-117 and STS-119, that focused on the construction of the Space Station’s truss segment and a final set of solar wings. Steven has completed four spacewalks totalling over 26 hours. This was his first flight on a Soyuz. Before becoming a NASA astronaut, he worked as a software engineer and he has a doctorate in computer science.

Alexander Skvortsov was the most experienced of Alexander’s crewmates in terms of days in space. He completed a long-duration stay on the outpost for Expeditions 23 and 24 and was the Station commander for the second half of his stay. He is known for eating wasabi sandwiches in space, saying “Spicy food is my fuel, as good as a rocket’s.” Alexander is an air force pilot and a qualified diver.

Born in Riga, now part of Latvia, in 1970, Oleg Artemyev was selected to join Russia’s cosmonaut corps in 2003. Oleg has taken part in simulated spaceflight studies to examine how our bodies and minds react to living in isolation. The cosmonaut spent 120 days in isolation on a simulated mission to Mars as a precursor to ESA’s Mars500 study.

Alexander Samokutyaev flew into space for the first time to the International Space Station as flight engineer on Expedition 27 and 28. His launch took place in April 2011 and coincided with the 50th anniversary Yuri Gagarin’s pioneering orbit of Earth. He has worked for more than six hours outside the Station, on the Russian part of the Station.

Yelena Serova was the fourth Russian female cosmonaut to travel to space, 17 years after Yelena Kondakova's mission on Space Shuttle STS-84, the last female cosmonaut. Yelena Serova is an engineer and economist and joined the Roscosmos cosmonaut corps in 2011. Her husband is also a cosmonaut and they have one daughter.

Barry Eugene ‘Butch’ Wilmore is a NASA astronaut. He has a degree in electrical engineering, and has flown thousands of hours as a navy test pilot. He flew to the International Space Station on an 11-day Space Shuttle mission in November 2009. During the mission, the crew delivered two Express Logistics Carriers and about 13 tonnes of replacement parts for the Station. Butch says the best thing about his job as an astronaut is the variety his job brings.