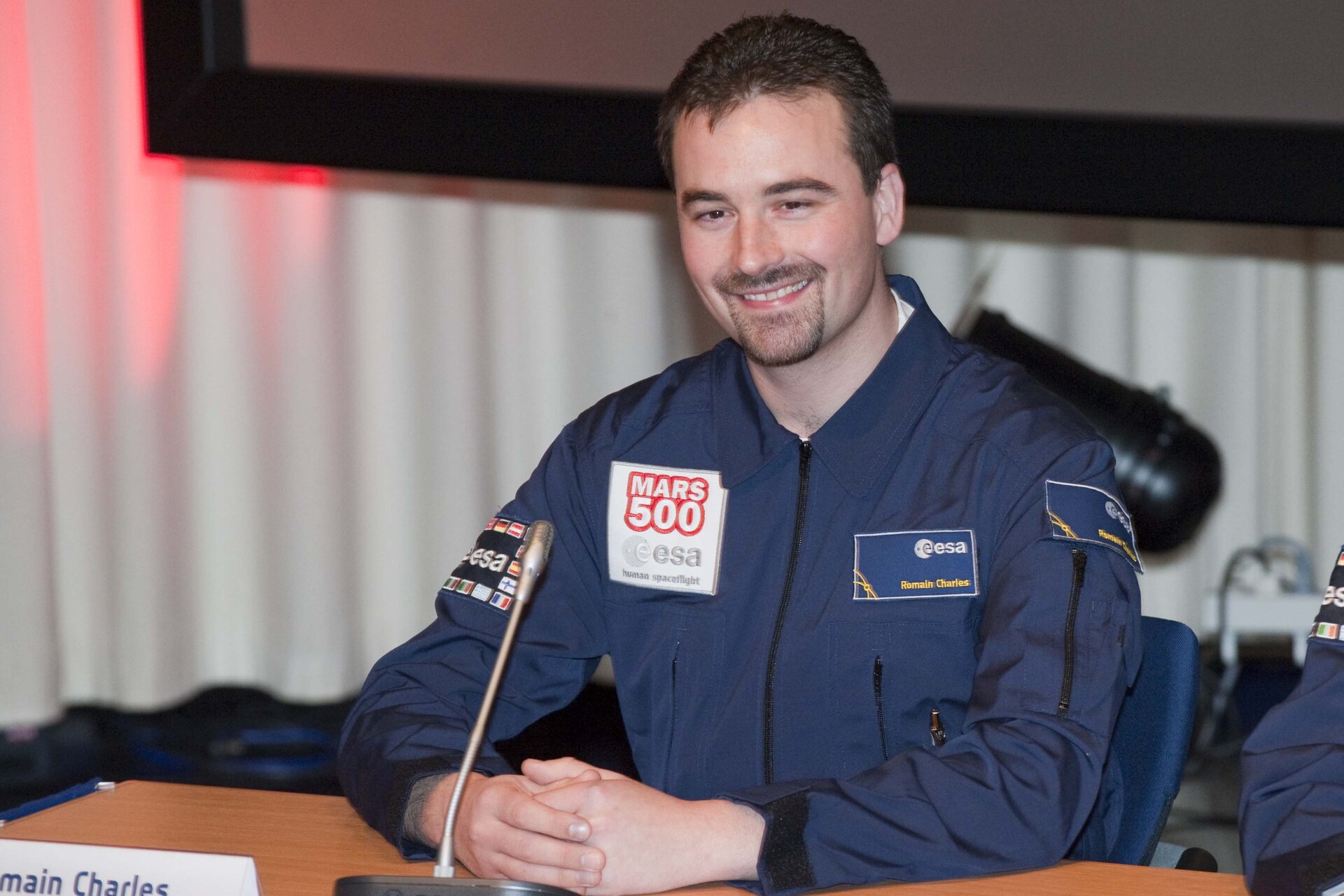 There are six crewmembers:

Age: 33
Country: France
Resides in: Saint Malo, France
Current employment: Engineer
Education: obtained a Master’s degree in Engineering from the French Institute of Advanced Mechanics in Clermont Ferrand, France, which he attended from 1999 to 2004.
Experience: Romain Charles has been working for Sotira (part of the SORA group of companies) since 2005. He is currently a Quality Manager for the company, which produces composite panels and has undertaken Quality Engineer roles within the company for the likes of Mclaren, Aston Martin and Tesla Motors. This followed a spell as a Quality Engineer for the automotive components company Mann+Hummel following graduation in 2004. This included working on projects for Nissan.
Interests/hobbies: books and cinema, Internet, swimming, running and scuba diving. He is also an active member of Junior Chamber International.

Age: 39
Permanent residence: Russia, Moscow
Profession: surgeon
Education: in 1996 graduated from Russian Military-medical academy named after S.M.Kirov (Saint-Petersburg), faculty of preparation of physicians of foreign armies. In 1997 finished internship in specialty surgery. Candidate of medical sciences, in 2009 defended thesis on the theme: “Immediate and postponed results of prosthesis of aortal valve with frame xenopericardial prosthesis of “BioLAB” series”.
Experience: from 1990 to 1994 studied in the treatment faculty of Tadzhikistan medical university. In 1994 he transferred to Military-medical academy named after S.M. Kirov. From 1998 he operated in the Central military hospital in Dushanbe city. He worked in border regions of Tadzhikistan with Afganistan, he has experience of work with bullet and knife wounds. Since 2001 he worked in the department of oral surgery. From 2004 to 2006 he had residency training in cardio-vascular surgery in Scientific research centre of cardio-vascular surgery named after Bakulev (Moscow). In 2006 he began post-graduate courses, finished them successfully and defended thesis in 2009. He worked in SRCCVS named after Bakulev and participated in operations on heart as the first assistant.
Scientific interests: physiology and pathophysiology of blood circulation, medical support and prophylaxis of diseases in conditions of long-term isolation
Interests/hobbies: cinema, theatre, sports

Age: 40
Permanent residence: Russia, Moscow region, Star City
Profession: Engineer-shipbuilder
Education: In 1996 graduated from Higher Military-naval engineering of Lenin’s order college named after F.E. Dzerhzhinskiy on specialty search-rescue and diving works, building of rescue and ship-raising means and ships (Saint-Petersburg).
Experience: from 1996 he served as the teacher-commander of platoon on the Black Sea fleet (Sevastopol), where he learnt to work with all the types of diving equipment. He performed educational diving deep-water descending from the rescue ship “Epron”, he trained more than 250 junior specialists of Military-naval fleet on the qualification “deep water diver”. In 2004 he was transferred to MCC named after Y.A. Gagarin on the position of the leading engineer-investigator (senior diving specialist). He participated in training of ISS spacewalk astronauts in simulated weightlessness in hydro-environment. He was the head of diving training of candidates for cosmonauts and members of the testing brigade.
Scientific interests: improvement of life support systems and space operations
Interests/hobbies: tourism, photo, diving.

Age: 34
Permanent residence: Russia, Moscow
Profession: military physician, physician of general practice, physiologist
Education: in 2005 graduated with honour from Military-medical Academy named after S.K. Kirov, faculty of training of physicians for Military-Air Forces and Space forces. In 2006 finished internship on specialty “physician of general practice”.
Experience: from 2006 he was a researcher of scientific-research testing department of scientific-research testing centre of aviation, space medicine and military ergonomics (SRTC ASM and ME). He is a specialist in medical support of tests of aviation sets and items of military technics, medical devices, apparatus and facilities. He dealt with the issues of increase of tolerance of human organism to unfavourable factors of environment and conditions of activity. Since 2009 he has been the head of laboratory of psycho-physiological investigations. He investigated the problem of information interaction human-technical means.
Scientific interests: biochemistry, pharmacology, physiology.
Interests/hobbies: sports, fishing.

Age: 29
Country: Italy
Current employment: Engineer
Education: Urbina has Bachelor’s and Master’s degrees in Electronics Engineering from the Politecnico di Torino, in Turin, Italy and a Master’s degree in Space Studies from the International Space University, in Strasbourg, France.
Experience: Diego Urbina was a crewmember at the Mars Desert Research Station in Utah, USA in January 2010, researching the growth of tropical plants and spacesuit constraints. He was an Attitude and Orbit Control Systems researcher for the Aramis nanosatellite at the Politecnico di Torino in 2008. Following graduation, Urbina spent time as an outreach and educational activity organiser in the developing world. Prior to this he was an operations and astronaut training intern at the Neutral Buoyancy Facility of ESA’s European Astronaut Centre in Cologne, Germany from May to August 2009. Urbina participated in the ‘Image Reversal In Space’ (IRIS) experiment for the ISS, supporting numerous measurements for baseline data collection and testing the experiment during ESA’s 50th Parabolic Flight Campaign in 2009.
Interests/hobbies: scuba diving, graphic design, drawing, fitness training and football.