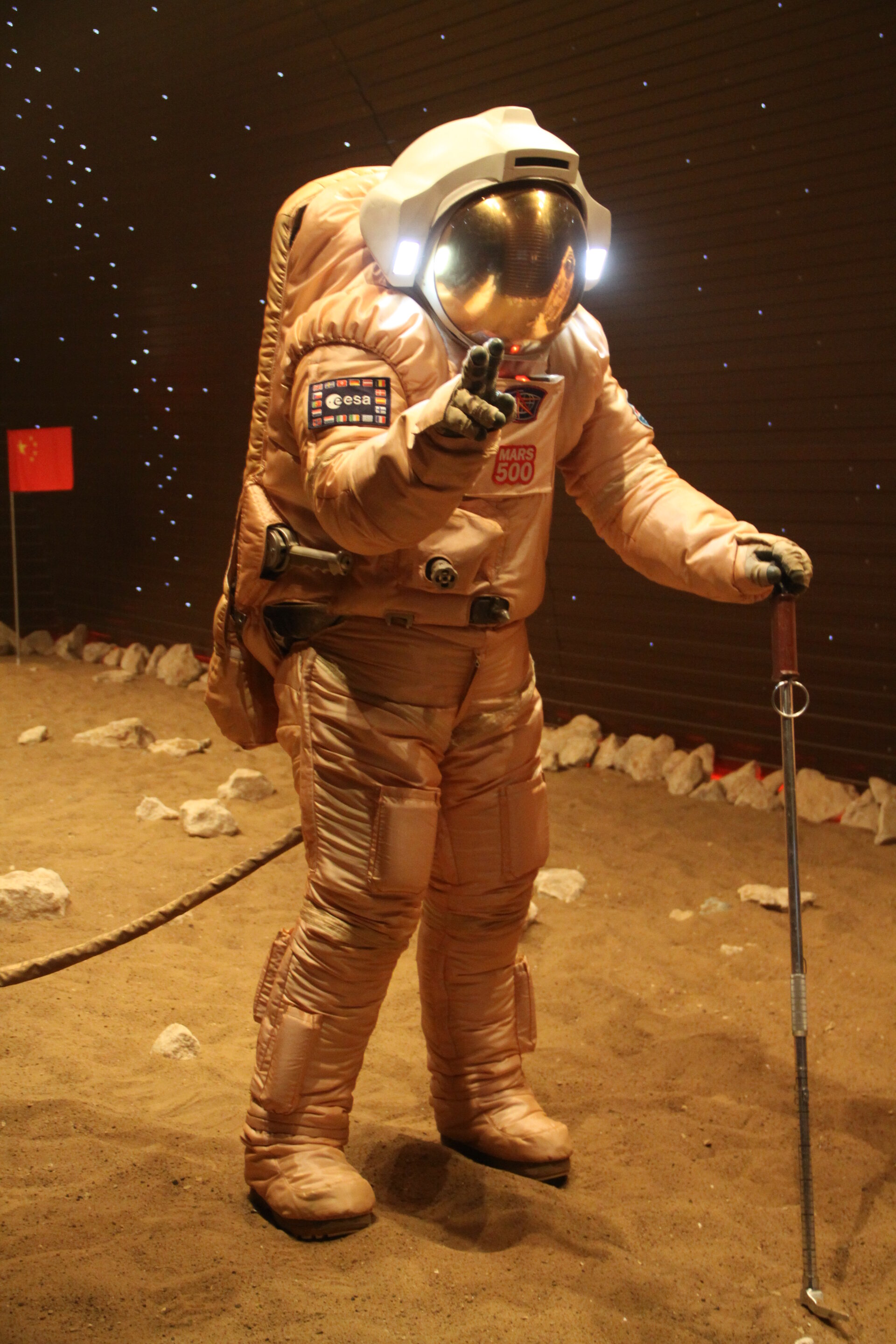 Now that the Mars500 crew has been united, when the Marswalkers, 'returned' from the surface of the Red Planet to join the 'orbital' trio, Diego has again had time to send his thoughts. This diary was written on 21 February, before the last egress to the simulated martian surface.

The last few weeks have been truly exciting. As you probably know, Wang, Aleksandr and I, transferred to the landing module, have been living in further isolation, in a reduced room (about 50 cubic metres) for a couple of weeks, in order to represent the landing on Mars.

In spite of it not being the real Red Planet, it did mean so much in our 'microcosmos' that I think that even if it wasn't exactly the same emotion someone would feel on Mars, it did come quite close, at least for me.

After transferring, we initiated the operations that a crew would need to do on Mars. We used a software called 'Virtu' that simulates several environments and situations. One of the scenarios was this: imagine a pressurized rover that we had to drive from our base to the (purposely hidden and difficult to reach) landing place of a probe that had been sent to Mars before the manned mission. It was quite tricky, especially when coming back to the base, when a sandstorm and drained batteries made our road tougher.

The same software allowed us to play a marsonaut, stranded on Mars, who suddenly faced a meteorite shower that obliged him to seek refuge in a cave. I am not 100% sure you will need to run frequently from meteorites on Mars to save your life, but caves are certainly excellent places to escape from the more common threat of a peak in solar activity, from which the Martian atmosphere and lack of magnetic field do not shield you as well as on Earth! For this task we wore a virtual reality helmet, to make it more realistic.

We also drove two different rovers in this sort of 'advanced' video game. With the rovers, we obtained samples from the ground and got them to the base, often accompanied by several duties at the same time (listening to the radio signal, classifying information, etc) that challenged our multi-tasking capabilities. We often wore, as usual, a bunch of electrodes that recorded our bodies’ reaction to these all these simulations.

The 'games' were cool, yes, but obviously what everyone was looking forward to, was the REAL Extravehicular Activity (EVA) – or a Marswalk.

EVAs on orbit can be incredibly challenging, you are packed in a spacesuit that is pressurized, so it doesn't allow you to move easily. Here the EVAs were on the ground, where to that difficulty you can add gravity, that is, having to carry this rather heavy suit on you. Astronauts on the moon moved somewhat more easily, because the gravity there is very low. On Mars it is about 38% that of the Earth, and that is still quite a bit for our current suit technology.

The engineers at the Russian suit manufacturer removed some of the weight of these spacesuits, that can weigh about 100 kilos, and they ended up weighing 35 kilos. This would be their weight if astronauts wear on them on Mars.

The spacesuits were fantastic, after 8 months of not having used them, we could still remember how to work with them. Like riding a bike!

In the first EVA, Sasha (Aleksandr) and I, went out and used a set of tools that were made for the (sadly ill-fated) Soviet Lunar programme. I am talking here about the real tools! It was such an honour.

When Wang said "you are GO for EVA", that was the moment I had been anticipating for months. We picked samples of soil and stones from the ground , helped by Wang on the radio. Of course, not before having planted the ESA, Russian and Chinese flags. Whether you lived it or saw this scene from the outside, you couldn't avoid thinking of the first steps on the Moon, and this time there was in the environment some sort of cosmic projection of the moment, into the future. It felt very inspiring. I could say, beyond a simple simulation.

Besides the ample space of that room (keep in mind we had been living in small modules for several months) what also had an impact on me was the loneliness of the place. It was only us in there, working with, and listening to the only 2 people in the Universe that could communicate live with us. This contrasted a lot with the pictures and videos we got later of lots of people witnessing the EVAs in huge screens at the Mir station control Room in Mission Control Centre in Moscow.

After this first EVA that impressed so much our senses, came the second EVA, when Sasha and Wang ventured as well into this very big room that represented the surface of the Gusev Crater on Mars. I was on the radio, helping them out when they needed. Communication over the radio is not easy either in such a multicultural crew.

I came to realize it is not rare for us to rely on hand language and facial expressions to fill some of our 'linguistic differences', which is of course impossible or very difficult with a spacesuit. Therefore I am very proud that in the end we managed to communicate almost flawlessly during all the EVAs thanks to the hard work pre-EVA: we spent long nights before each EVA to make sure the 'choreography' would be well executed, we discussed the best order of the tasks among ourselves and with the ground, key words we all needed to know, and other matters as well in order to make it very efficient and as realistic as we could. The orbital crew also watched our runs, and especially Romain took careful note of absolutely every step in the EVAs and then made suggestions for the next ones.

These communications with the Orbiter were not usual: with Romain we calculated the slots of the passages of the Orbiter, and only in those moments in which the orbiter was passing above us, would we communicate via radio/video (the latter was not used so much).

It was a self-imposed challenge, but I think it was very interesting. We would try to use these 4-6 slots in a day as efficiently as possible, looking at tables with the access times stuck next to the phones and calling each other to report what was going on in each spacecraft. It reminded me of what it is like to talk on a phone, which I haven't done in so long.

After each of the three EVAs, the dozens of journalists and people who gathered in Mission Control Center wanted to get a glimpse at how we controlled a real rover on the surface from the base. We basically used this rover to pick up some representative ‘stone samples’ from the surface. My turn to work and beam down my rover images to Moscow was after the second Marswalk.

We had already been controlling the capricious rover for a couple of weeks. She had a lot of little things that worked in particular, unusual ways, but after a few practice runs for a couple of weeks, we already knew her very well. Little did I know, she had still one surprise reserved for me.

She has a bunch of cameras, located in strategic places, one in front of each of the two containers for samples and sensors, one in front, one on the rear, one on top of the arm, and one in some strange corner of the arm that seemed to me like the equivalent to the human inside of the elbow, we never used that one because it never showed anything interesting. The most important was the front camera, it is the only camera you don't want to lose and, obviously, it happened right when I had to do the demonstration. A screen full of static due probably to some radio interference. Great.

It was quite an adventure to drive it 90% blind. Surprisingly that ‘useless’ camera that I mentioned before, ended up being the ‘most useful’ one when I lost the main cam.

I bet the people gathered at the Mission Control Center didn't think I was the most skilled driver in the Solar System with all the time it took me to gather the samples (it was like grabbing ping pong balls with pliers while blindfolded), but after finishing the track, a feat I and the engineer in charge of the rover previously thought impossible, it felt amazing!

The third EVA was the most interesting for me. It was Sasha and I again, and we used a drill to loose pieces of a massive boulder in the centre of the room, and then picked them up from the ground with the tools. Breaking stones won't be a rare task for a martian crew since we have learned from Earth that microorganisms can live inside rocks, surviving in a very hostile and unlikely environment like, for instance, rocks on Mars.

But that was only half of the job: before this EVA started, we had received a video from Moscow, telling us somebody had to fall to the ground to simulate an accident, and then TRY to get up again with the help of his EVA buddy.

It’s not an easy task - falling on your face with those spacesuits is like getting inside a fridge and asking someone to push it and slam it against the floor. Besides that, getting up is also tough because your pressurized spacesuit doesn't like you bending your legs the way you need in order to get up, and the metal frame in the suit tends to keep your thighs straight.

That sounded like rollercoaster-grade fun on Mars, and a big challenge, so I volunteered for the fall.

I took two extra minutes of rest on the spacesuit benches to prepare (usually we needed to sit on them for five minutes for every 10 minutes of work!) got up, walked to the target site, and hit Mars with my body as hard as I had to.

For some reason the ‘simulated’ dive I did and the spectacular crash just reminded me of certain football players that are very good at faking this type of fall. After getting up with the help of Sasha, feeling the relief, and reporting my safe status, the first thing I said to Wang on the radio was "Diego to Base, OK, did I get my penalty kick?".

The whole EVA experience was amazing, a well needed injection of adrenaline in the middle of a monotonous trip. I am sure the psychologists and engineers will get a good deal of information from our work on the surface, but it also gave a lot of information to us, and personally, it was a satisfactory demonstration of what the teamwork of this crew can achieve.

Today as I write this, we virtually took off from Mars, inserting ourselves into the orbit of Aleksei, Romain and Sukhrob, and are currently chasing them, waiting for the phases of our orbits to align, so we can rendezvous and dock, getting our wonderful crew together again to start soon our long, long way home from Mars.

It's been an unforgettable moment in our lives. Thanks Mars. This marks just the beginning of this endeavor of humankind, therefore I feel confident when I say in the name of all of us humans: see you soon, Red Planet!