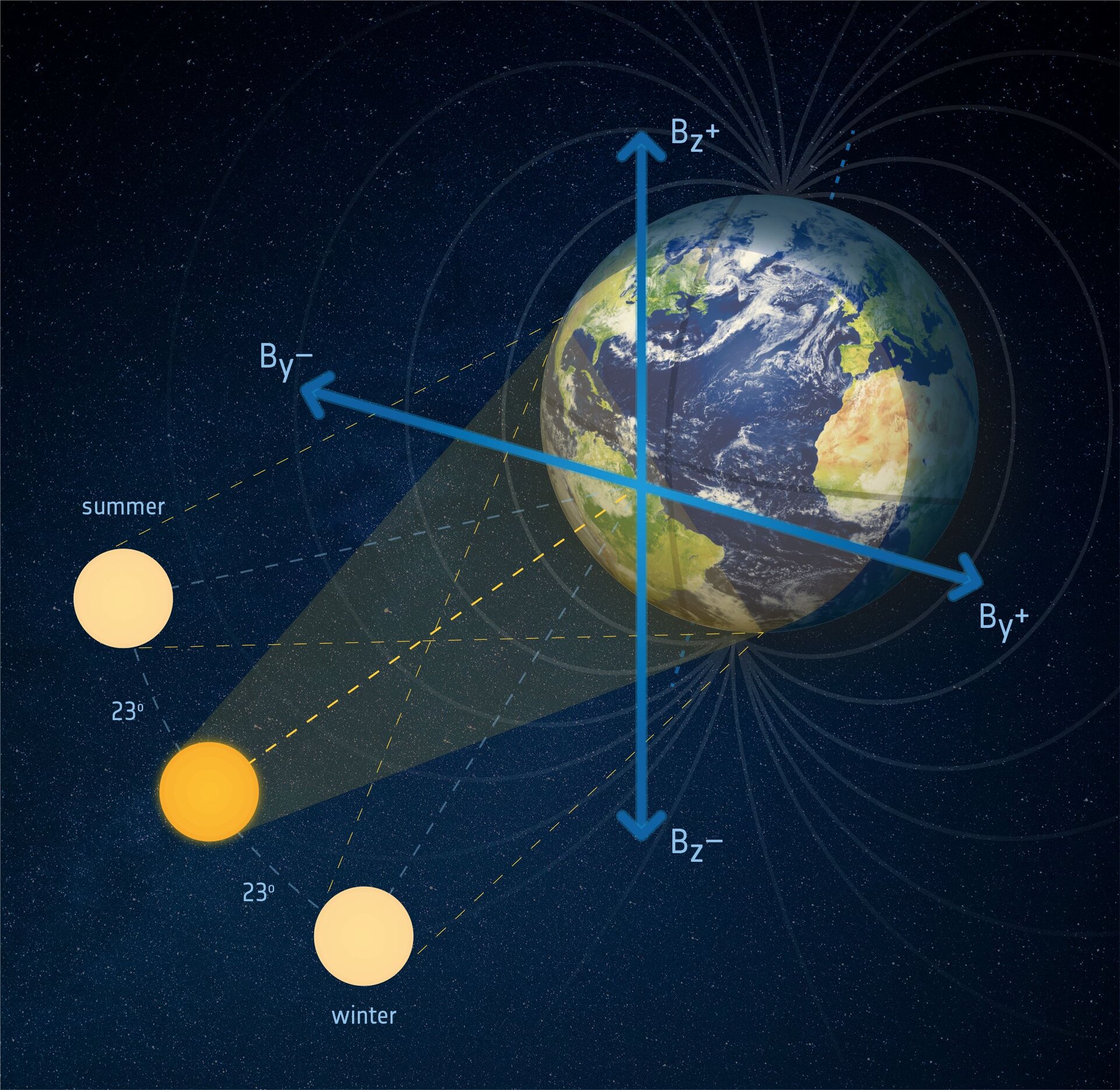 Strong electric currents in the upper atmosphere are known to vary according to the season, but ESA’s Swarm mission has discovered that this seasonal variation is not the same in the north and south polar regions.

Named after Kristian Birkeland, the scientist a century ago who first postulated that the ‘northern lights’ were linked to electrically charged particles in the solar wind, these currents flow along Earth’s magnetic field lines in the polar regions.

Magnetic field measurements from ESA’s Swarm satellite constellation are allowing scientists to understand more about these powerful currents, which carry up to 1 TW of electric power to the upper atmosphere. This is about 30 times the energy consumed in New York during a heatwave.

It is important to understand the interplay between these Birkeland currents and the solar wind that bombards our planet and that can potentially cause power and communication blackouts.

New findings, presented this week at the Swarm science meeting in Canada, show how three years of measurements from the mission were combined with measurements from Germany’s earlier Champ satellite to produce global climatological maps of these currents.

Moreover, these results show differences between currents in the northern and southern hemisphere, how they change with the season and how they vary according to the strength of the solar wind.

“While this sounds complicated, it means that hardly any solar wind can enter the magnetosphere and arrive at Earth if the interplanetary magnetic field points north, parallel to Earth’s magnetic field.

“On the other hand, if the interplanetary field points south, the opposite is true and this allows a connection to be made with Earth’s magnetic field.

“Part of the energy in solar wind then further energises the charged particles that are responsible for the visible light displays of the auroras.”

Birkeland currents therefore tend to be weak for a northwards interplanetary field and strong for a southwards field.

Importantly, these new results also reveal that the strength of the currents is not the same in both hemispheres. These hemispheric differences may relate to asymmetry in Earth’s main magnetic field.

In fact, the two geomagnetic poles are not geometrically opposite to one another, and the magnetic field intensity is also not the same in the north as in the south.

Dr Laundal said, “The main reason for this probably has to do with differences in Earth’s main field. Such differences imply that the ionosphere–magnetosphere coupling is different in the two hemispheres.

“In particular, the magnetic pole is more offset with respect to the geographic pole in the south compared to north, which leads to different variations in sunlight in the ‘magnetic hemispheres’. Because of these differences, the two hemispheres do not respond symmetrically to solar wind driving or changing seasons.

“Swarm is a fantastic tool for space science studies. The high-quality measurements and the fact that there are three satellites working in concert hold many new clues about how our home planet interacts with the space around it. It’s a fascinating time.”