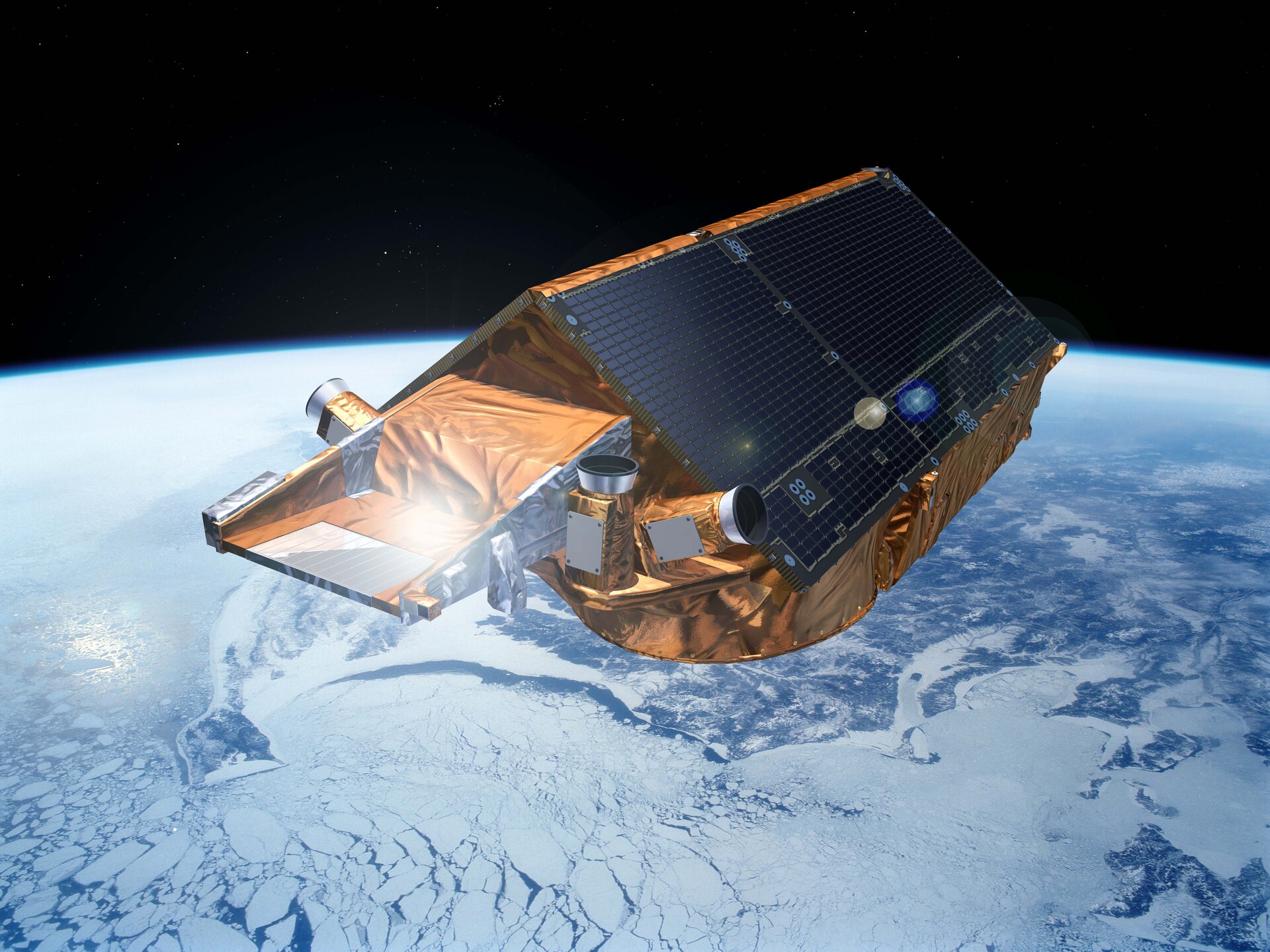 From an altitude of just over 700 km and reaching latitudes of 88°, CryoSat-2 is monitoring precise changes in the thickness of the polar ice sheets and floating sea ice. The observations made over the three-year lifetime of the mission will provide conclusive evidence of rates at which ice cover may be diminishing.

It is now generally agreed that the Earth's atmosphere is getting warmer, and although the impact of climate change is expected to be amplified at the poles, it is extremely difficult to predict what effect this is having on the polar ice cover.

The go-ahead to build and launch the second CryoSat mission came in February 2006 after the loss of the first CryoSat satellite in October 2005 due to launcher failure.

The mission's objectives remain the same as before – to measure ice thickness on both land and sea very precisely to provide conclusive proof as to whether there a trend toward diminishing polar ice cover, furthering our understanding of the relationship between ice and global climate.

Spacecraft Operations Manager Nic Mardle, from the UK, is an experienced spacecraft manager who assembled and trained the first CryoSat Flight Control Team in 2003-05.

Everyone at ESOC watched in profound disappointment as the first CryoSat mission, launched 8 October 2005 on a Rockot launcher, ended in failure; CryoSat was totally lost just a few minutes after launch and before the ESOC Mission Control Team even had a chance to acquire the satellite.

Although CryoSat-2 is in theory a rebuild there are plenty of challenges to keep the team busy, including over 80 changes to the satellite as well as new hardware and software available for the ground control systems and new members in the team. All the elements were revalidated and tested prior to the new launch date, so that the Flight Control Team was equally prepared as the last time to look after command and control, on-board software maintenance and mission planning, as well as interfacing with other ESOC teams, including Flight Dynamics, Ground Facilities and Software Support.

Since launch on 8 April 2010, Mardle and her team have been working on maintaining and operating the spacecraft through the commissioning phase into the routine operations phase.

For CryoSat-2, the LEOP (Launch and Early Orbit Phase) period was (almost) unique, as the satellite does not have any deployable solar panels; in fact the satellite has no moving parts at all, except for some valves in the propulsion system.

This has enabled a very significant cost saving, but does pose some problems for the provision of adequate solar power in CryoSat-2's unusual orbit. The solar panels are fixed to the satellite body, forming a 'roof' at a carefully optimised angle, which provides adequate power under all orbital conditions and still fits within the launch vehicle.

Exhaustive preparations and rehearsals took place during the pre-launch period, and mission operations proper commenced upon separation of the satellite from the launcher and will continue throughout the 3.5-year nominal lifetime of the mission. The FCT at ESOC oversees mission planning, spacecraft status monitoring, spacecraft control, orbit determination and control, attitude determination and control and on-board software maintenance, among others. These are all tasks which are common to any low-earth orbit mission such as CryoSat.

The launch and early orbit phase, which lasted three days, brought the satellite into its Fine Pointing Mode, in preparation to start switching on the payload followed by commissioning activities. The Commissioning Phase lasted six months and consisted of verifying the performance of all elements of the system: satellite platform and payload, orbit, ground segment and science data processing facilities.

The Commissioning Phase was an extremely busy period for all the teams, and included not only preforming the planned operations but also resolving any problems that occurred with the satellite and the ground segment.

In addition, the teams supported last-minute requests from external agencies, for example underflights with NASA's Icebridge team, which allowed parallel aberrations from CryoSat and a radar flown in an aeroplane by NASA over the Antarctic and later in the year over the Arctic.

The Commissioning Phase was successfully concluded with the Commissioning Results Review held in November 2010 and allowing the mission to formally transition into the routine phase.

Since the completion of the Commissioning Phase, the science team have been busy analysing the data and determining the evolution of ice thickness around the globe.

The single routine ground station for CryoSat is located at the ESA/ESTRACK station in Kiruna, in northern Sweden (a network of additional stations will support CryoSat-2 during LEOP - including Troll and Svalbard)). The station is linked to the Flight Operations Control Centre, at ESOC in Darmstadt, for control and monitoring of the satellite.

In addition, all of the considerable science data processing will be done locally at Kiruna by an automated system of computer workstations.

The CryoSat-2 ground segment at ESOC is using the SCOS-2000 mission control system.

Mission planning is preformed at ESOC while the payload is coordinated by ESA/ESRIN; the detailed plan is uploaded regularly to the satellite from Kiruna. The large amount of data received from the payload, and in particular from the altimeter, is being pre-processed at Kiruna, before being sent to ESA/ESRIN for final processing and data dissemination to the users.

An important aspect of the CryoSat-2 Ground Segment is that it has been designed for operations with a low level of manpower.

Furthermore, remote operations and troubleshooting can be performed on all systems located in Kiruna.

CryoSat-2's primary payload is the SAR/Interferometric Radar Altimeter (SIRAL), which has extended capabilities to meet the measurement requirements for ice-sheet elevation and sea-ice free board.

CryoSat-2 is also carrying three star trackers for measuring the orientation of the baseline. In addition, a radio receiver called Doppler Orbit and Radio Positioning Integration by Satellite (DORIS) and a small laser retroreflector ensures that CryoSat-2's position will be accurately tracked.

Unlike most satellites, CryoSat does not have any deployable solar panels; in fact the satellite has no moving parts at all, except for some valves in the propulsion system.

This has enabled a very significant cost saving, but does pose some problems for the provision of adequate solar power in Cryostat-2's unusual orbit. The solar panels are rigidly fixed to the satellite body, forming a "roof" with a carefully optimised angle, which provides adequate power under all orbital conditions and still fits within the launch vehicle.